Alexander Gelfand ("Printing in 4D") is a New York City–based freelance writer whose work has appeared in publications including The New York Times, Discover magazine, and Wired.

Stephen Voss ("Green All Over," photography,) lives with his wife and two children in Washington, D.C. His work has taken him around the world for clients such as Outside, Esquire, The Atlantic, and National Public Radio.

Laura Wexler ("To Boldly and Safely Go") is the author of the narrative nonfiction book Fire in a Canebrake: The Last Mass Lynching in America. She is also the co-founder of the Stoop Storytelling Series, a live event and podcast that features the extraordinary true tales of "ordinary" people.

Bryce Wymer ("To Boldly and Safely Go" illustration) is a visual artist based in Brooklyn, New York. His works address human social progression and the driving relation between the powerful and the powerless.

George Wylesol ("Banking on Brain Science," illustration) is an illustrator, designer, and writer living in Baltimore. Past clients include The New York Times, NBC, Bon Appetit, and Burberry. 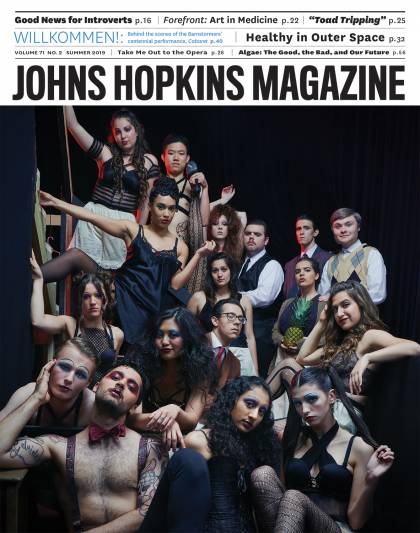 Baltimore photographer Frank Hamilton headed backstage in the Swirnow Theater to get this shot of the Barnstormers student theater group on the opening night of Cabaret ("Come to the Cabaret"). Amid a hectic pre-performance photo shoot, Hamilton knew it would be tough to get the entire cast in one frame but says he was having such a good time with the students, it seemed impossible not to include everyone. "I wanted to create an image where the cast could play within the two worlds of stage life and the characters' lives," he says.