Before "Farm to Table"

Tracing the culinary heritage of the New World

Image caption: A scene from French artisan Étienne Delaune’s The Labours of the Months (1568), a collection of twelve engravings depicting seasonal work throughout the year. In December (pictured), pigs are slaughtered and bread is baked.

Hercules, George Washington's head cook at his Mount Vernon plantation, joined the Washingtons at the President's House in Philadelphia in 1790, but only for less than six months at a time. In Pennsylvania, you see, enslaved persons living in the state for six months could claim their freedom, and Hercules was one of our Founding Father's 123 enslaved workers.

Before the end of Washington's second term, after which he'd return to Virginia for good, Hercules fled for freedom. "And he did it on George Washington's birthday," says Amanda Herbert, A&S '10 (PhD), the associate director at the Folger Institute in Washington, D.C. "That was either a deliberate, provocative act, or it was because he knew that attention would be drawn elsewhere that day. It was symbolic nonetheless. I'm sure that symbolism was not lost on Hercules, nor on George and Martha Washington." 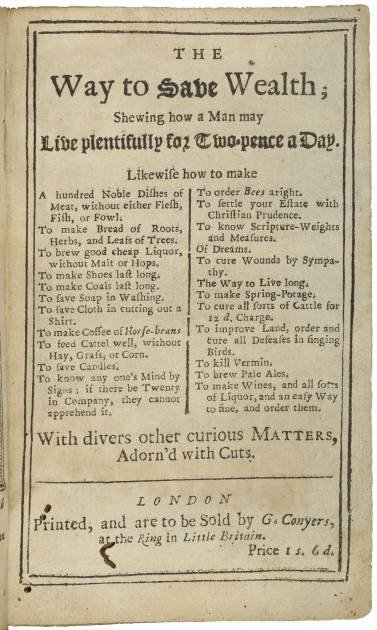 Image caption: The title page of a cookbook

Hercules is one of five early modern cooks spotlighted in First Chefs: Fame and Foodways From Britain to the Americas, an exhibition Herbert helped curate at the Folger Shakespeare Library. Herbert is the co-director of the exhibit's parent project, the Folger Institute's Before "Farm to Table": Early Modern Foodways and Cultures. The $1.5 million Andrew W. Mellon Foundation–funded initiative explores the cultural, literary, and historical impact of food production and consumption in the wide British World from 1500 to 1800.

How and what people ate dramatically evolved during that time. Herbert points to the Columbian Exchange, a period named after Christopher Columbus, when the biomes of Europe, the Americas, and Western Africa first came into contact with one another, radically affecting animals, plants, peoples, and the diseases they all carried. "You can't really understand early modernity without understanding its foodways," she says. "Western Europeans got to experience for the first time things like chili, pumpkins, corn, tomatoes, potatoes, chocolate, vanilla—many of which are now iconic to the national identities of European countries. Who can imagine Italy without tomatoes, Ireland without potatoes, or Switzerland without chocolate?"

The exchange, Herbert adds, was devastating for indigenous communities, with colonization wiping out as much as 90 percent of native populations in the New World. "Whether wonder or horror, it was an exceptionally important moment in history, and we wanted to recognize its impacts on Western Europeans, African people, and indigenous people in the Americas," Herbert says, adding that when historians have traditionally talked about food, the focus was on the feasts, field yields, and practices of wealthy landowners. "But, in fact, the archives themselves and our collection here at the Folger tell the stories of so many more people, and one of the things that we tried very hard to do in [First Chefs] was recognize those who harvested food from the fields, helped make it, and put it on the table."

Recipes from the 'First Chefs' exhibit

The Folger Shakespeare Library has the largest collection of early modern English manuscript recipe books in the world, and First Chefs uses them as both sources of text and artifacts. In addition to Hercules, the exhibition spotlights people such as Hannah Woolley, the first woman to publish a cookbook in English, and William Hughes, who wrote the first English eyewitness account of chocolate in his book The American Physitian, published in 1672. He even included instructions "Of the making of Chocolate into a Drink." An updated interpretation of Hughes' hot chocolate is included as a free recipe card at First Chefs, along with recipes from the other first chefs highlighted.

Hughes left behind a written record of what he saw. Hercules, Washington's enslaved cook, didn't. In fact, after his escape, he disappeared entirely from the historical record. "We hope that he found his way to freedom, that that's what that means," Herbert says. "But we can't know. So how do we reconstruct his life in a way that tries to recognize and honor his work as a culinarian?"

Herbert, along with co-investigators Heather Wolfe, the Folger curator of books and manuscripts, and David Goldstein, A&S '95 (MA), an associate English professor at York University in Toronto, believes the collaborative approach of Before "Farm to Table" can help illuminate such historical gaps. They're teaming up with artists and popular writers to create more-accessible research results than the usual journal papers, conference presentations, and panel discussions, though they're doing that, too.

For Chefs, the curators contacted culinary historian Michael Twitty to help them come up with a recipe inspired by Hercules instead of the people who enslaved him. Twitty adapted a version of akara, a West African black-eyed pea fritter, for Hercules, given the kinds of kitchen tools and ingredients he may have had.

That kind of creative work aims "to fill in some of those gaps and silences," Herbert says. "The most traditional kinds of scholarship require explicit documentation—a paper trail. But we've tried to find a different path to tell different stories." 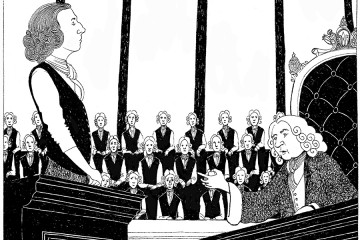