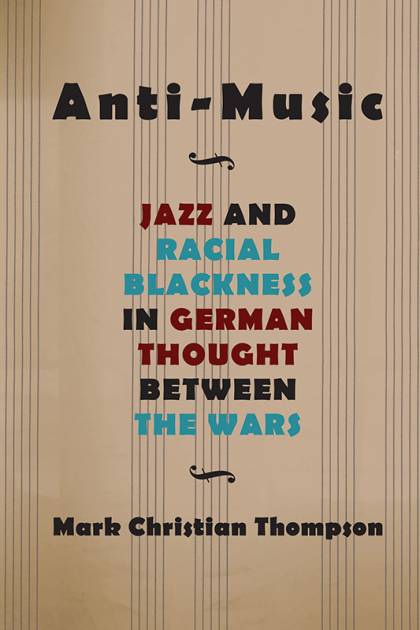 Jazz flowed freely through the nightclubs of Weimar Germany. It's what people danced to, drank to, and partied to. But it wasn't, exactly, what we'd call jazz today, or even jazz as we understand it from the era. African-American music, being the provenance of black people, was repudiated. From a Nazi's perspective, the German cafe music of the time was something to be celebrated, which the party did in the 1930s. And how a popular African-American art form could go from being banned by government, as ragtime was in the 1910s, to becoming part of the soundtrack of the Nazi enterprise is explored in Johns Hopkins English Professor Mark Christian Thompson's Anti-Music (SUNY Press).

It's a thorny history, Thompson writes. The "virulent antiblack racism of the Nazi period that led to the victimization of so many Africans and people of African descent was complicated by jazz's continued, unprecedented popularity in Germany after 1933." As with his Kafka's Blues, which reads Franz Kafka through the lens of racialized blackness, Anti-Music continues Thompson's unique, fascinating exploration of the intersections and overlaps of 20th-century German thought and black culture and intellectual life. And he does it through close readings of texts from the time, with the writings of Bertolt Brecht, Hermann Hesse's Steppenwolf, Theodor Adorno's "On Jazz" essay, and Klaus Mann's Mephisto, as well as with examples from visual arts, theater, and other media.

The result is a broad consideration of what jazz was and wasn't in 1920s and 1930s Germany, and at fewer than 240 pages, a dense, heady read. It also presumes a solid familiarity with both literary criticism and German history and culture. But as a sobering investigation of how a culture industry can manufacture and propagate political ideas—particularly definitions of blackness, primitivism, and white superiority—it's a superb, engrossing read. Thompson navigates this dense intellectual terrain in prose that's more lucid and accessible than it has any right to be, and nimbly traces how racist attitudes about jazz didn't end after World War II in Germany but rather evolved in subtle ways. A challenging read worth the effort.