Johns Hopkins recently ranked No. 4 on the Daily Meal's list of best colleges for food. Readers share their recollections of meals on campus. 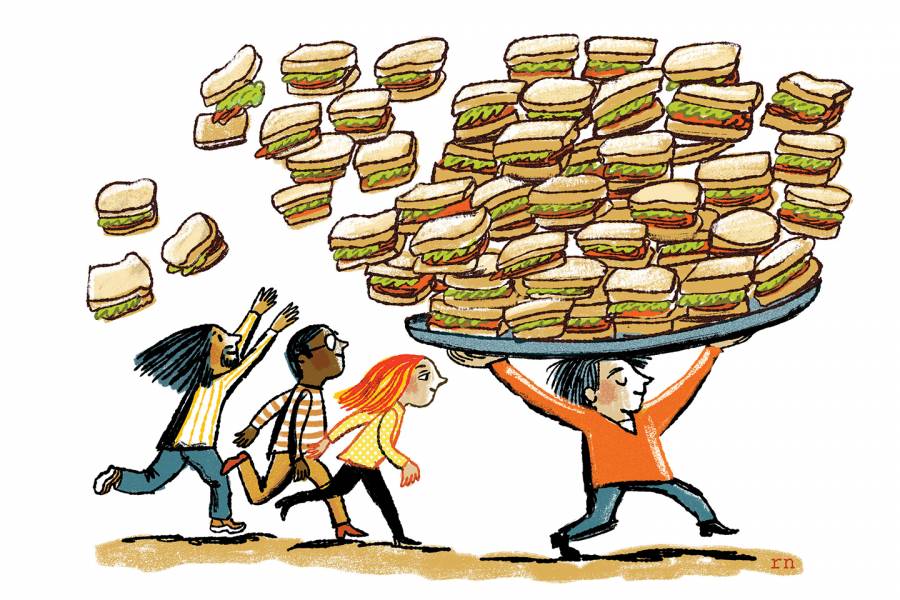 The start of my senior year, September 1971, we returned to school to find major changes made in the cafeteria in Levering Hall—more automated and less freshly cooked food. As a bit of a protest, we posted some fliers, called one of the delis on Lombard Street, hopped in my van, and returned to campus with 200 corned beef and roast beef sandwiches, which we sold from the back of the truck while parked outside Levering Hall. We had paid 55 cents each and sold them for 75 cents, admittedly profiting from our protest. We easily sold out the first day, and so we returned the next day with 200 more sandwiches. 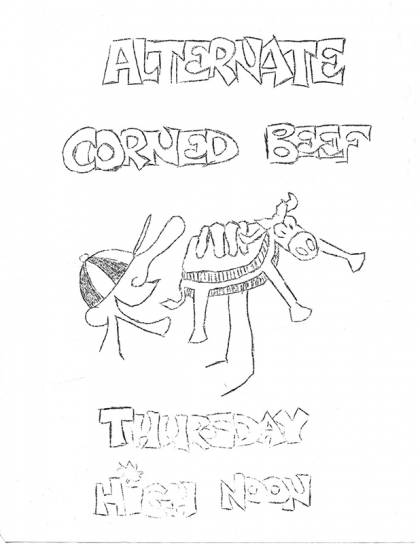 Image caption: Marvin Greenbaum, A&S ’72, and his buddies promoted their corned beef racket with this flyer, circa September 1971

As it continued, the best part was walking into the deli each morning at 11:30 a.m. We were stars! "The boys are here!" they shouted, treating us like royalty with numerous samples of the day's fare. Everyone there wanted to know what we were doing with 16 dozen sandwiches. It lasted about 10 days. On that day, it may have rained, but it was the day that we didn't sell out. We were left with numerous sandwiches. I think it was my buddy Carl's birthday, so that night we put some candles in the leftover sandwiches, sang "Happy Birthday," ate, and said farewell to "Alternate Corned Beef." —Marvin Greenbaum, A&S '72

While attending graduate school in the late 1970s, I taught at Seton High School, the school that occupied 2800 N. Charles Street, where the JHU School of Education currently resides. The weekly offering of the delicious liver and onions with fluffy mashed potatoes was a highlight of my culinary week. As a young married woman teaching full time, coaching sports, and attending grad school part time, I greatly appreciated the homemade cooking at Hopkins. To this day, each time I eat liver and onions, my mind flashes back to JHU's cafeteria delights. —Joan Sadowski Grega, Ed '80 (MS)

The summer after fifth grade, I participated in a summer program held on the campus of Johns Hopkins. It was a great class. The teacher was outstanding, and the other students, from elementary schools all over Baltimore, were smart and friendly. At lunchtime, whether we brought lunch or bought it, we went to the university's cafeteria. It wasn't the food that was exciting; it was the ambience. There we were, eating with students from one of the great American universities. I was one of them—well, sort of. But I could fantasize. Maybe one day I would really be one of them. In 1954, I was accepted into Johns Hopkins University. For the next four years, I would be really one of them. —Jerome "Jerry" Chertkoff, A&S '58

I'm Jewish, was very Reform, and had no dietary observance. But I had observant Jewish friends on campus, and I saw that all they had to eat was tuna salad every meal except breakfast, when they could have boiled eggs and cereal. By my second year, I was really getting fed up with the poor quality of the food, which seemed to be worse on weekends, when the head person at dining was absent. One Saturday I had enough, and stuffed a pork chop that was almost all gristle under her door. Together with others in the Jewish Students Association, I worked to get the kosher dining hall started. I was able to have better food. My observant friends were able to have kosher food. Last I looked, the kosher dining hall was still on campus. I've become Orthodox Jewish, and we keep a kosher home. It might have never happened without JHU. —Charles Kuttner, A&S '69

Cap'n Crunch's Crunch Berries cereal in the Terrace Room. And that somehow the vegetables from dinner seemed to be the next day's soup. —Grace Kung, A&S '89, Med '93 (MD)

My Hopkins madeleine is the garlic bread served in the snack bar in the freshman dorm building. Salty, buttery, and crisply toasted. Washed down with a coke while watching The Man from U.N.C.L.E. in the lounge. Garlic wasn't a problem as there were no girls on campus.

I had four years' experience of the cafeteria, but no dish there strikes a chord. But I remember that if no item on the steam table line struck your fancy, there was a large bowl of peanut butter, and one of jelly, in the corner as a last ditch belly filler.

Off campus, I remember a grimy little deli on, I think, 34th and St. Paul. In a basement, and they had a great hamburger and onion sub. And an old-fashioned pickle barrel. Greasy, but delicious. Then there was an old bierkeller, supposedly a haunt of H.L. Mencken. It had good sauerbraten and potato dumplings as big as softballs. Finally, in a happy accident while walking near Mt. Vernon, I found people sucking on lemons with a hollow candy cane stuck in it. I tried it, and it was good. Fifty years on, I seem to remember the food better than most of my classes; when life gives you lemons, stick a candy cane in it. —Gerald Molnar, A&S '66

When I arrived as a freshman in September of 1969 the only food available was the cafeteria in the Alumni Memorial Residences, the snack bar, and the kosher dining room. I never had a chance to eat in the kosher dining room. It was small, and Presbyterians like myself weren't given priority. The snack bar made passable cheeseburger subs, but the food at the main dining hall was ghastly beyond description. The hall was a beautifully decorated gallery of portraits of mutton-chopped professors from an earlier century, but the food, served in an assembly-line cafeteria style that would have done a gulag proud, was essentially inedible. I spent most of my freshman year eating salads since they were the only thing on offer that was remotely recognizable as food.

My clearest memory is passing through the line one night when the fellow to my left said, "I swear I saw that piece of bread pudding here before!" With that, he took a knife and etched an X on the top of the bread pudding, then replaced it on the shelf. That piece of marked bread pudding stayed out on the food line for two weeks.

The biggest change I have seen in Hopkins over the past 50 years has been the elevation of the undergraduate to the current co-equal status. The new living quarters and the improvement in the food are just two of the more visible signs. —Donald S. Masters, A&S '73