After 44 years, the Alumni Association's Heritage Award gets a facelift

The old casting masters for bronze busts of Johns Hopkins were riddled with imperfections that would have made sculptor Hans Schuler cringe. The eye sockets had worn into dark holes, and the face, head, and neck were speckled with pockmarks. 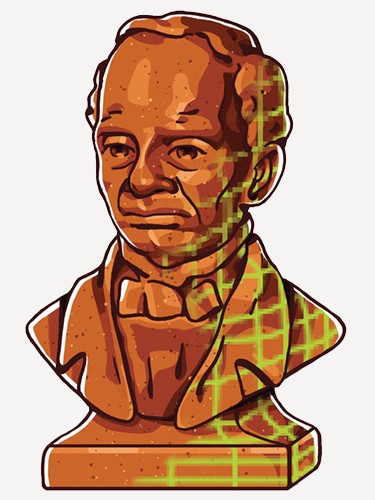 The time had come for a new mold to cast the "Bronze Johns" busts of founder Johns Hopkins handed out since 1973 as the Alumni Association Heritage Award. The awards honor graduates and friends of the university who have been of great service to the school and the Alumni Association for many years. And after 44 years, the working master—the statuette used to create the mold—"needed a facelift," says Nathaniel Leon, senior manufacturing engineer at the Whiting School of Engineering and a designer on the project. "It's sort of like making Xerox copies," he explains. "Each generation of copies loses detail and sharpness, and there's always damage [to the master] along the way."

To create the new generation of mounted busts—standing 8 inches tall and 4.5 inches wide—the Alumni Association turned to a team that included in-house design engineers, 3-D imaging experts, and a medical artist. Owings Mills engineering company Direct Dimensions first scanned several of the old busts and made repairs to the model and then created a digital model of the repaired Mr. Hopkins' iconic head. That rendering was used to 3-D print a master statuette, from which a blemish-free mold was created to cast new busts in acrylic.

Juan R. Garcia, an associate professor in the Department of Art as Applied to Medicine and director of the Carnegie Center for Surgical Innovation's 3-D Printing & Visualization Facility, says it took five hours to 3-D print Hopkins' head, layer by layer, using the Carnegie Center's equipment. Each layer was 0.016 millimeters. The new master bust was then sent to Creative Castings on the Eastern Shore, where a mold was formed and the new award statuettes were made. With their bases made of wood from a felled cherry tree where the Mattin Center now stands, the awards became even more "wholly Hopkins."

Leon says the new master is of the same quality as the original design made by Schuler (1874–1951), the famed sculptor who produced the bronze-and-marble monument to Johns Hopkins installed in 1935 at the Charles Street entrance to Homewood campus. For future awards, new masters can be produced as required using the digital blueprints of the master, Leon says.

With the Bronze Johns revitalized—the acrylic busts are painted with a bronze patina true enough to fool the naked eye—Garcia is back to his regular gig, where the stakes are somewhat higher: using 3-D imaging and printing to make anatomical models of patients' physical problems to help surgeons prepare for complex procedures. 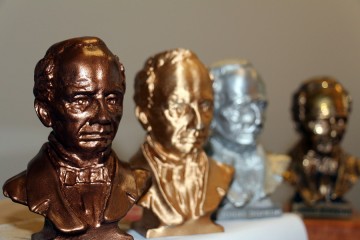