Statuette of Mr. Johns Hopkins is bestowed as part of the university's Heritage Award

In the Carnegie Center for Surgical Innovation on the Johns Hopkins East Baltimore campus, a 3-D printer typically reserved for medical modeling is helping complete a two-year project to restore a special part of the university's heritage.

Since 1973, a small-scale bust of Mr. Johns Hopkins—familiarly called "Bronze Johns"—has been awarded by the Johns Hopkins Alumni Association to distinguished alumni and friends of the institution for their outstanding service to the university. However, over the 45-year legacy of the Heritage Award, the statuette masters—the original sculptures that casting molds are made from—have deteriorated.

Now, thanks to a dedicated team, a new master has been created to restore the Bronze Johns statuette to its former glory. 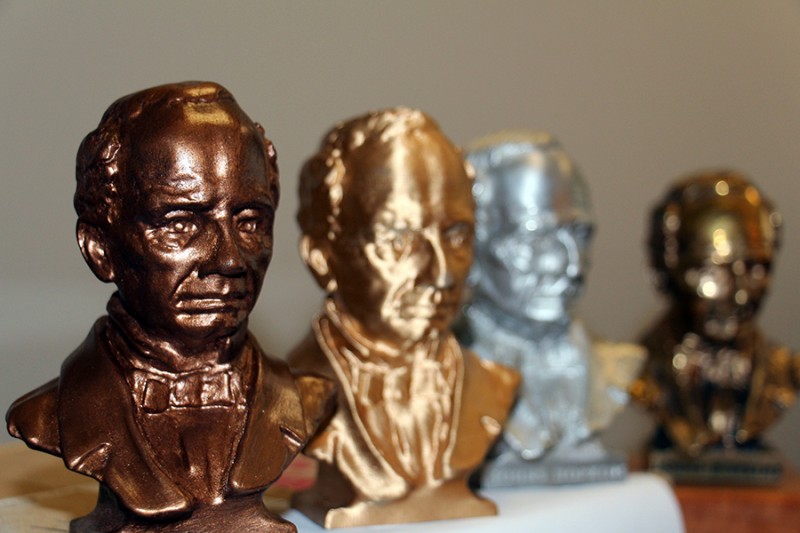 Image caption: A final prototype of the Bronze Johns statuette (far left) stands alongside an earlier draft in a different finish. The silver statuette is an old master of the original Bronze Johns, and at far right is an old Heritage Award.

The master was sent to Creative Castings on the Eastern Shore, where a mold was formed and statuettes were cold-cast in bronze, says Niel Leon, senior staff engineer for the university's Whiting School of Engineering.

"Cold-casting reduces costs and preserves quality, which we've now restored back to the original," he says.

Even the statuette bases include a little piece of Johns Hopkins history, Leon adds.

The first group of the new Bronze Johns busts will be mounted on bases made of wood from a cherry tree that grew where the Mattin Center now stands and on bases made of reclaimed wood salvaged from buildings across the Johns Hopkins campuses.