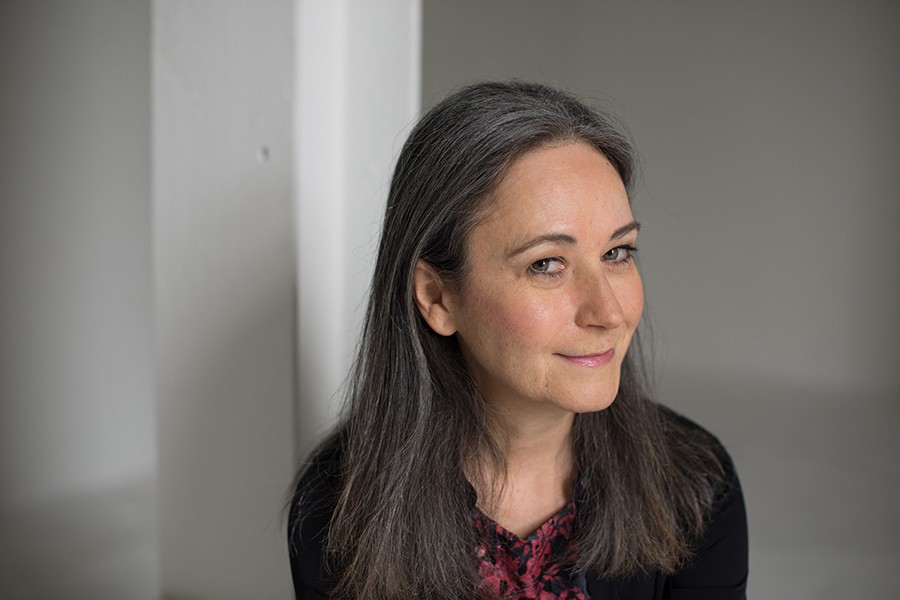 The program director of the Johns Hopkins Advanced Academic Writing program uses cave diving as an exploration of grief in her arresting new novel, Blue Field. Johns Hopkins Magazine caught up with Elise Levine to talk about music, blue as recurring motif, and the "existential humor" of Joy Williams.

After I finished your novel the first comparison that came to mind was Derek Jarman's Blue, his devastatingly intimate, monochromatic film from 1993. I say that not only because of the superficial title connections but because how explicitly you both use a kind of built-in association with the emotional temperature of the color blue as a springboard to explore a much more nuanced and polyphonous narrative, psychological, and impassioned terrain. Was your focus on blue as this multilayered idea in the novel from the beginning, or did it get more sophisticatedly developed in the editing process?

I recognized the creative possibilities in focusing on the color blue during the later stages of rewriting Blue Field. In earlier drafts I'd already used some of the blue tropes—the color blue saturating an early scene in a motel with the main characters Marilyn and Rand, for example—and also Marilyn's attention to color in general as a way into her consciousness. I'd also presented images of sky and water as inversions of each other as a way of suggesting Marilyn's sometime state of spiritual and psychological suspension. But it wasn't until I was doing some background research into optical phenomenon associated with the anatomy of the human eye—since not only is Marilyn a medical textbook illustrator, but she's also often preoccupied with vision and insight—that I learned of the blue field entoptic phenomenon. Click. I had my title. And a way of connecting many of the layers I'd been working with. In subsequent drafts I heightened the use of blue even more.

"[I] saw tremendous possibilities in depicting this underwater underworld, hidden from view for most of us, as a way of modeling the depths of various modes of consciousness, including the ecstatic, and grief."
Elise Levine

I've never seen Jarman's film Blue, though I did think a lot about Yves Klein's monochrome paintings and his International Klein Blue, which influenced Jarman. I also kept in mind some of the early color field paintings, especially the works of Mark Rothko and Robert Motherwell, as well as the Canadian painter Jack Bush. Their works have always struck me as possessing a raw, primordial force that achieved the level of spiritual expression. I wanted to capture some measure of that force in my novel.

Do you dive? What attracted you to that sport as a subject and thematic vehicle in this novel?

I used to dive. I never surpassed the novice technical diver level. But the drive and commitment and accompanying high-stakes risk-taking and danger that technical diving entails struck me as a compressed, dynamic stand-in for the risks most of us take in life in order to grow as individuals, and the gambles that life asks of us. I also saw tremendous possibilities in depicting this underwater underworld, hidden from view for most of us, as a way of modeling the depths of various modes of consciousness, including the ecstatic, and grief. It made sense to set these in broken, remote worlds—abandoned shipwrecks, caves formed by fractures in solid rock—to echo our own currently damaged places and to get at the sense of overwhelming grief and psychic brokenness Marilyn experiences.

Tell me a bit about the editing process. One of the impressive feats you pull off in Blue Field is stark language sketching visually detailed scenes and characters. But the line between an economic use of language and too little information is a fine one. Was there a quasi-working mindset to the process—e.g., descriptive detail short and vivid, narrative perhaps more precisely elucidated—or was it more a matter knowing it when you saw it? 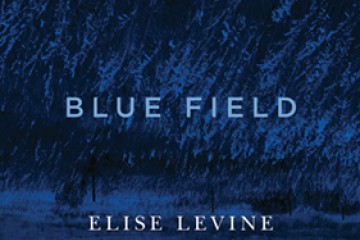 It was a huge challenge figuring out how much exposition to use and how to not allow it to kill a scene or overall narrative movement. At one point I had a 600-page draft, with very detailed information on the equipment the characters were using, the physiology and physics of diving, Jewish funerary rites, explicit classical allusions to descent into the underworld, and homages to the various literary depictions and traditions of the female grotesque. Among other things! It was pretty crazy. I spent much time working the essentials into scenes and images and paring down the exposition to a minimum, hoping that the strength of the story would take the reader along for the ride.

Talk a bit about your handling of time and setting here. While I take the story to be taking place in a time period that's relatively contemporary and in a place where, well, people can cave dive, the exact specifics aren't entirely spelled out, and while some time markers are included—I think toward the end you mention that about a year has passed since a character's death—not the entire time period. Did you want to background such conventional storytelling markers a bit to explore some of the more remote areas of the who instead of the more mundane where and when?

I wanted the novel to have something of a fairy tale-like quality, a "once upon a (future) time" feel. Passionate love, ecstasy, abandonment, violence, grief—the main character negotiates all these in a somewhat atemporal world, as do the characters in fairy tales. So the novel isn't attached to a particular time period external to the novel, and time passes in leaps over the course of the narrative, to zero in on pivotal moments in the protagonist's experience. I did this in hopes of capturing an immersive, primal feel.

I ask the above because for a novel that spends a fair amount of time underwater and a bit in one character's head, you're able to convey the physical world quite insistently—the claustrophobia of exploring a tight space underwater, the feeling of a gas mixture in the lungs, the texture of ground and trees and objects, the confines and limitations of the body itself. For a novel that plunges a reader into some pretty intense abstract feelings and thoughts, it never lets us forget the unavoidable thingyness of consciousness. So I'm curious: Did you recognize during the editing process that you could conjure this tangible world into stark verbal existence, or did you realize you needed that in a novel that was actively looking down into grief's depths and thinking, "I can't see what's down there, let's go find out?"

Despite the atemporality, I very much sought from the get-go to ground the novel in the specifics of the various settings and the body, in what the senses perceive as they mediate the workings of thought and consciousness—especially since Marilyn is a medical textbook illustrator, always considering how to model human anatomy and its responses to the ills of the world. It took many drafts, though, for me to realize how much of an examination of grief the novel really was, and seek ways to intensify physically representing the psychological darkness Marilyn experiences.

I ask the following as a writer married to a drummer who informs how I think about damn near everything. You're married to a composer. Has music influenced your writing at all, or how you think about writing?

Music very much influences me as a writer. I think of writing as a process of orchestrating. Sensory details, image, the acoustic properties of language, characterization, style, and voice and tone all work into a structure that might itself share characteristics of music such as formal large- and small-scale repetition in terms of the overall design. In the kind of fiction writing I do, of course, there's narrative content, though—Marilyn does this, then chooses to do this, her husband responds.

Growing up, did anything—literary or otherwise—shape the kind of writer you thought you wanted to be?

As a teenager I was blown away by the prose writing of Samuel Beckett and Virginia Woolf, and the poetry of Adrienne Rich. I felt they showed how elastic language and character and story could be, as well as the politics and humanity of what a person could be. I also loved Mervyn Peake's Gormenghast novels, for their language as well as the high Gothicism, the pure strangeness made legible—more and more I realize Peake's influence on me.

What's the author, novel, short story, or genre that you press on people—you know, the person or title you can't believe more people don't know about and celebrate?

The American novelist and short-story writer Joy Williams will take your head off. Her work is mysterious and precise and funny, full of sly existential humor, beautifully realized scenes, and dogs. I can't imagine living, let alone writing, without her books.

What are you working on now?

I'm this close to finishing a new story collection, This Wicked Tongue. Short stories, with their compression and heightened focus, are my true literary love. So I'm very excited.