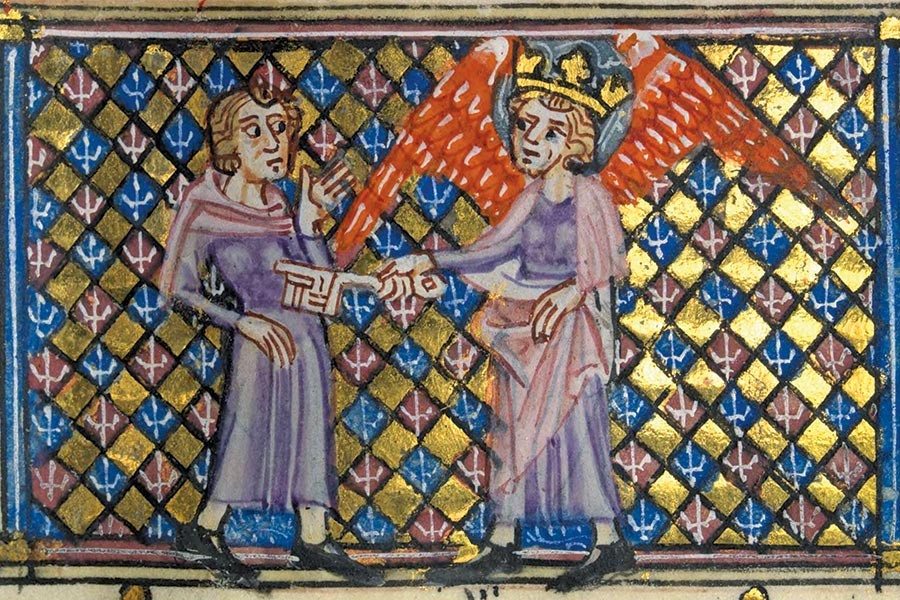 Credit: The National Library of Wales

Call it the Villon epiphany. François Villon was a 15th-century French poet. His work has been passed down in many hand-scribed manuscripts, but none of them are originals in the author's hand. On an autumn day in 1980, Stephen Nichols was in Paris studying different parchment manuscripts of the poet's Le Testament. Like all textual scholars of the day, Nichols, who is now a Johns Hopkins professor emeritus in the Department of German and Romance Languages and Literatures, often worked from a modern critical edition of Villon's work; that is, a text assembled from multiple sources by scholars and meant to represent the definitive version that Villon intended. "I was astounded to see the way the texts had been prepared and presented in the critical edition, which tied them up very nicely and gave them endings," Nichols says. "In the [actual medieval] manuscripts, I couldn't find those endings! I suddenly realized that editors, starting in the early 19th century, couldn't stand that a literary work didn't have a nice ending. And I realized that I was looking at evidence that in the Middle Ages, people had a high tolerance for just reading poems that didn't have to have a neat beginning, middle, and ending."

New questions began to form in Nichols' mind. Did medieval readers mean the same thing by the term "author," and did the concept even matter? How did they regard many different versions of popular works? And why had modern-day textual critics become so far removed from the medieval manuscripts? "I realized that musicologists or art historians dealt with real medieval artifacts, whereas literary scholars worked with critical editions, which were basically what scholars imagined the works should have been in the Middle Ages. Why shouldn't literary scholars deal with real medieval artifacts?"

A good question, though until the mid-1990s there was at least one good answer: Studying originals meant finding the money and time to travel to repositories around the world, where one could study only a single work at a time, a constraint that made comparisons between manuscripts problematic. Enter the internet. In 1996, Nichols and digital specialists at the Johns Hopkins Sheridan Libraries began assembling an online archive that has grown to include digitized copies of more than 200 hand-scribed manuscripts of Roman de la Rose, a poem of 22,000 lines begun by Guillaume de Lorris around 1230 and completed 50 years later by Jean de Meun. Now, scholars could minutely examine and compare dozens of manuscripts, all versions of the same poem, to analyze the differences and understand how reading in the Middle Ages compares to reading now.

Nichols regards this as a revolution in medieval textual scholarship, and he makes this argument in From Parchment to Cyberspace: Medieval Literature in the Digital Age (Peter Lang Publishing, 2016). In the book, Nichols notes that scholars had been conditioned to think of manuscripts as "archaic precursors of printed books" and "unreliable witnesses of medieval works." He says, "The idea of the critical edition was that you extracted a text from a manuscript and ignored the rest. The assumption was that every manuscript was potentially suspect—if you found divergences from the manuscript considered 'authoritative,' they were considered scribal errors." Plus critical editions eliminated distinguishing features of medieval manuscripts such as rubrics, decorations, illuminations, and marginalia. "We were very far from the medieval culture we thought we were studying."

The availability of detailed digital scans changed that forever. "We went from looking at one or two manuscripts at a time to thousands of pages of manuscripts, and that made a huge difference. Once you saw that there are so many different versions, you couldn't have the same mindset. You couldn't ask the same questions, and the whole epistemological nature of the inquiry would need to change." Scholars had long talked about variants, meaning there was one original text and then variations.

"But once you realize there is no original [still in existence], the idea of variants made no sense," Nichols notes. "Each one of these manuscripts has to be considered an original.

Each manuscript gives you a different way of reading the work. We've shifted from the notion that the manuscript is a suspect source to the perspective that it's the locus for critical study, not simply a quarry from which to get a proper version."

The use of digitized medieval manuscripts has not gone unchallenged by other scholars. "I was naive at the start," Nichols says. "I thought that if we could put manuscripts online, all those expensive trips to repositories would no longer be necessary and people would be happy. I was in a seminar in Düsseldorf on the history of the book, and a professor talked on the importance of the materiality of the manuscript—if you weren't looking at the real thing, you were looking at something inauthentic. I realized this was a prejudice about the inauthenticity of images that went all the way back to Plato. So I had to show why digital images of manuscripts were authentic versions of the manuscripts they represented."

Nichols does not argue for jettisoning the modern critical edition. "My hope, in fact my expectation, is that what we have done, paradoxically, is to show its importance," he says. "The critical edition has glossaries and annotations that we don't have in these digital repositories." He hopes digitized manuscripts will encourage production of even better critical editions, the difference being that no one will continue the illusion that the critical edition is a more authentic text. "They both go together and are very important." 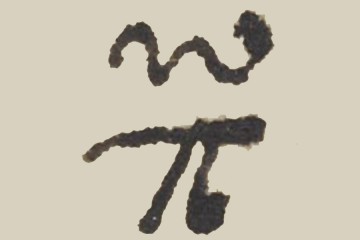 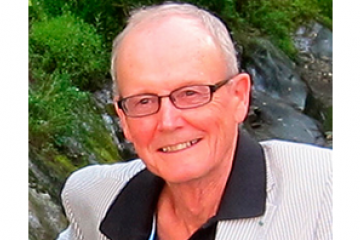 Published Dec 22, 2014
Prestigious award recognizes longtime researchers who have had an impact and who will continue producing cutting-edge achievements in the future