The tools of combat to control mosquito-borne diseases like dengue fever mostly fall into three groups: kill, repel, or prevent. People spray. Lay traps. Put up nets. Eliminate breeding grounds. But dengue fever continues to sicken an estimated 96 million people globally and kill more than 20,000, mostly children. So the lab of Johns Hopkins molecular microbiologist George Dimopoulos set out to genetically engineer Aedes aegypti—the major mosquito species that spreads both dengue and yellow fever—to resist infection by the dengue virus. The results of a recent study showed they have succeeded in producing a mosquito in the lab that, while not quite dengue-proof, is significantly more disease-resistant. 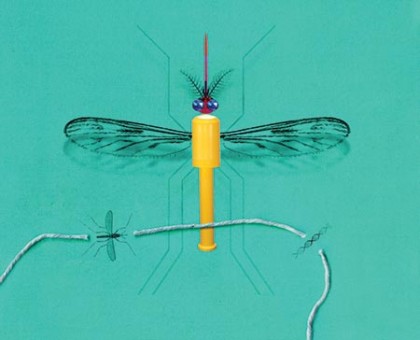 The concept is simple, cost-effective, and self-sustainable: break the infection cycle at the point of the bug. When a mosquito bites someone infected with dengue virus, the virus needs to complete its infection cycle in the mosquito's gut, eventually spreading to the insect's salivary glands and enabling disease transmission. But not all mosquitoes become infected. Just as a human fights off a viral infection, the mosquito has its own immune system that kicks in to fend off a foreign invader. Using a micro-injection tool, the researchers inserted a DNA instruction into the mosquito's genome to ramp up expression of the two genes that control this immune system response, but only immediately after a blood meal. Imagine an anti-ulcer treatment that turns on just when eating fried or fatty foods.

The results, published in the journal PLOS Neglected Tropical Diseases, show that the genetically engineered versions of the mosquitoes, which had been purposefully infected with dengue virus, had significantly fewer copies of the virus in their guts and salivary glands. The rate of transmission-capable mosquitoes fell from 70 percent to 42 percent. Dimopoulos, a professor at the Bloomberg School of Public Health, says making mosquitoes completely resistant to a disease is difficult, but even reducing the infection rate by 30 to 40 percent could have a significant epidemiological impact. The results showed no significant decrease in infection rates of Zika, chikungunya, and yellow fever, other diseases transmitted by Aedes aegypti.

Dimopoulos says the ultimate plan is to release the mosquitoes into the wild and have them replace the native population. But first the researchers have to develop a way to make the modified genes carry on to subsequent generations. "We have to give ours a selective competitive survival advantage," Dimopoulos says. They'll do this through what is called gene drive, a technique that promotes the inheritance of a particular gene so it can spread rapidly through a population. In 2012, the CRISPR/Cas9 genome-editing tool made this artificially induced gene drive possible by allowing scientists to better target the DNA region that would make a trait more likely to spread through procreation.

Dimopoulos says more research is needed to further optimize the engineering of these mosquitoes to make the virus-blocking mechanism more potent and/or turn on additional blocking mechanisms. After that will come confined field trials where the modified mosquitoes are released in a net-covered shed to mate. They're roughly seven years out from the final trial phase, most likely open field release on an isolated island. Dimopoulos assures he's not setting up a cataclysmic superbug scenario. In the lab, the modified mosquitoes are as fit and flawed as the wild type, he says. They don't live longer or reproduce more. In fact, they lay fewer eggs. They're not smaller or bigger, or better at transmitting other pathogens. "They're basically the same mosquito but with a transient disease resistance after a blood meal," he says. "The biggest risk that I could see is that the virus will grow a resistance to this blocking mechanism over time, and disease transmission will resume."

Published Aug 10, 2016
Projects are among 21 selected for accelerated development in USAID Zika challenge