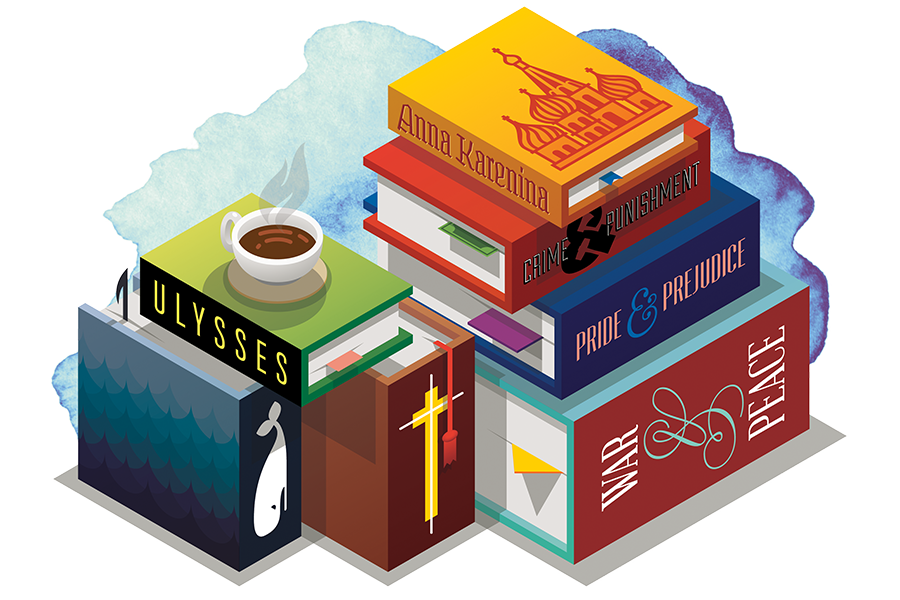 Image caption: We asked: "What classic book couldn't you get through?" Among your top answers: War and Peace, Pride and Prejudice, Moby-Dick, Ulysses, Anna Karenina, Crime and Punishment, and the Bible

As reported in "Coping with the displaced millions" [Summer], Johns Hopkins' Paul Spiegel and Len Rubenstein's piece in The Lancet makes it clear to me that President Donald Trump's travel ban is based on ignorance, illogic, irrationality, racism, and mean-spiritedness. The travel ban offers America no increased security benefits. While the debates go on, millions of refugees, especially from Syria, needing to escape to a place of safety, continue to suffer terribly.

The federal courts found the travel ban wholly illegal multiple times. Then, in an odd interim opinion issued in late June, the Supreme Court temporarily lifted the lower courts' blocks on the ban, and it decided to fully review the case this fall. So, the ban is partially in force until October. Of course, the ban is supposed to last only 90 days pursuant to Trump's executive order, so by October, the EO will be moot anyway. The president's order also includes a ban on all refugees to the United States for 120 days and cuts the refugee program admission volume in half, capping it at only 50,000 people allowed into America for the 2017 fiscal year. In the end, America must implement broad-based, compassionate, flexible laws and programs to help the many pained refugees.

BonAppetit.com editor and Johns Hopkins alum Carey Polis ["Food/life balance," Alumni, Summer] is certainly doing a great job. As an unrepentant "foodie" with subscriptions to innumerable food magazines, I consider Bon Appetit clearly the leader of the pack. With a Johns Hopkins grad as online editor, it is no surprise.

The word "humanization" is repeatedly used in an unexplained if not meaningless way in "Furry, four-legged, and family" [Summer]. In what way is not medically neglecting pets humanizing them? And if dogs adopt some of the behavior of humans, don't they have the right to humanize themselves?

I was dismayed by "Architectural bazooka" [Forefront, Summer], your item on Kate Wagner and her snide website mocking McMansions and their owners. She certainly has the right to write what she wants, no matter how offensive, but I'm puzzled why the magazine would feature her, especially when the remainder of the issue had no shortage of high-quality pieces. Wagner and her fans may find the style or the décor of those houses to be bewildering and humorous, but real people made these decisions and presumably enjoy their choices. I can only assume that the magazine considers making fun of rich people acceptable, and that it would not publish a piece making sport of low-income housing. Please be kinder in future issues.

Instead of Bret McCabe's description of Kate Wagner's McMansion Hell blog ["Architectural bazooka," Forefront, Summer] as "whip-smart," I would use the term "sophomoric snarkiness."

Instead of Bret McCabe's description of Kate Wagner's McMansion Hell blog as "whip-smart," I would use the term "sophomoric snarkiness."

For example, she describes a backyard with a large gas grill as a "sad dad zone." Really? Is she sure that it was not the locus of a lot of family fun and games and good food and happy laughter, with folks socializing and kids playing? You know what? Fifty years from now, elitists like Wagner probably will be describing McMansions as "charming exercises in eclecticism" and throwing barbs at whatever architectural style is popular with the "sad dads" of 2067.

In "Sit rep" [Summer], Dale Keiger's piece on Eliot Cohen's book The Big Stick, Keiger writes, "That there have been notable military failures, he says, has to be accepted as a reality of international affairs that all nations experience. Statecraft and warfare alike are fraught endeavors that frequently produce ambiguous outcomes and unforeseen consequences." This is grotesque, and I think it is wrong of the magazine to leave it hanging. How many Iraqis are dead as a result of our invasion? How many millions of refugees have we created? This outcome is not "ambiguous." It is a total disaster. And the consequences were foreseen by plenty of people.

It is remarkable that the words "civilian," "casualties," and "death" do not appear in the article. ("Killed" does, once.) Everything is abstract: "hard power," "military cooperation," "notable military failures." I do not know how to square this with "an insistence on being realistic."

I found your summer issue interesting in the juxtaposition of two articles informing "about essential work being done in a fraught world." The article on mass human migration ["Coping with the displaced millions"] was revelatory in suggesting that refugee/immigrant crises should not be viewed as fearfully as some today have harped on, with the intent of making it harder for such individuals to reach American shores. Their summary was that withdrawal "can, in the end, make us poorer and less safe."

Beating the war drums is no substitute for a comprehensive and ongoing re-evaluation of foreign policy. Walk softly, carry a big stick, but temper the fearmongering.

Then, the review of Eliot Cohen's book ["Sit rep"] stresses our eternal need for vigilance and military buildup: to wit, remain fearful. The writer felt The Big Stick was "a thoughtful, carefully reasoned defense of the idea that American foreign policy requires ... powerful armed forces that the nation must be willing to wield" and "there can be no effective soft power without hard power behind it."

There is no question that "sit reps" have been and will continue to be upon us. We do need to be realistic, which demands not just admitting U.S. incompetence in the past, but careful review and analysis. I wondered how Cohen, a chief adviser to Condoleezza Rice on Iraq, and his cohorts rationalized going to war on false premises, with the resultant loss of hundreds of thousands of lives and the fiscal debacle that ensued. Hard power run amok? Wasn't it a former Johns Hopkins University president's brother who warned us about the dangers of the military-industrial complex?

A more critical scrutiny of the history of this writer and his biases was needed. Not holding others responsible for failures in the past and then endorsing a book that, at least by your review, gave little depth to the specifics of failure in American foreign policy, is an editorial disservice. Beating the war drums is no substitute for a comprehensive and ongoing re-evaluation of foreign policy. Walk softly, carry a big stick, but temper fearmongering and bloating of the military budget, please.