The blogger behind 'McMansion Hell' tackles American consumerism, one oversized foyer at a time

Kate Wagner, 23, is a graduate student at JHU's Peabody Conservatory 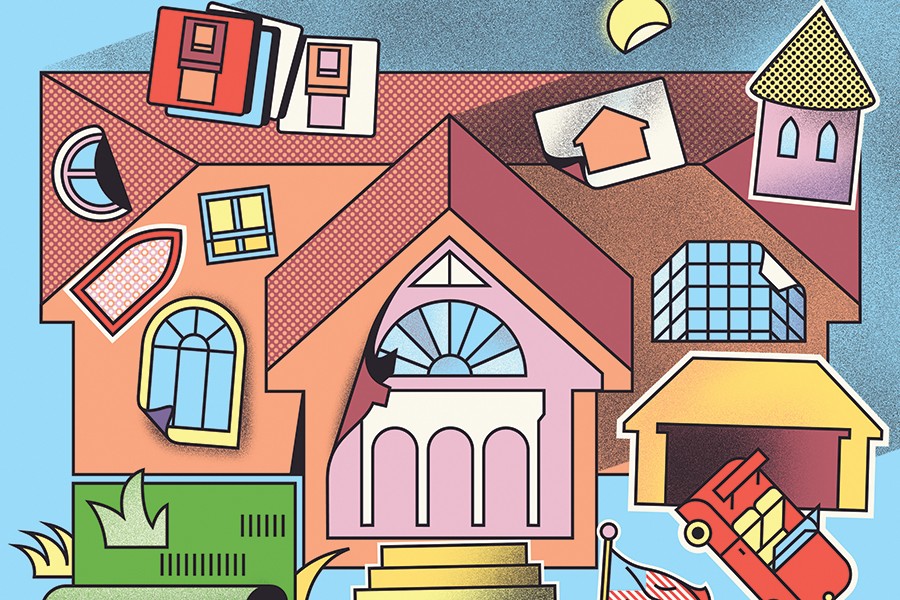 Kate Wagner came by her class consciousness the old-fashioned way. She grew up in an average three-bedroom tract home with vinyl siding. Come fifth grade, violin lessons and other activities exposed her to the lives and homes of peers from more-well-to-do families. She recalls a Girl Scout troop leader, a psychiatrist who got the big house in the divorce. Inside, it was practically empty. "The furniture was just sparse and sad," Wagner says. "There was a cooking day once in Girl Scouts, and I think that's the only time the kitchen ever got used."

For her whip-smart blog, McMansion Hell, she scours online real estate listings for examples of ostentatiously large, extravagantly tacky, and obnoxiously expensive suburban homes, and then posts the listing's exterior and interior photos to her site with commentary. Caustically and comically, she points out poor design decisions, such as the way a home tries to combine three to five different architectural styles on one facade, and imagines the experience of living in such monstrosities. A September 8, 2016, post for a home in Flower Mound, Texas, includes an image for a curious room that features three desks with computers, a pair of bunk beds, a flat-screen television, and a blackout curtain fully covering a window. She writes, "Possible explanations for this room: triplets, outsourced tech support, child labor violations."

Part of McMansion Hell's appeal is Wagner's wit, as she's sharpened her hatred into a blade that satirizes the visual and lifestyle vapidity of luxury homes.

Wagner, a 23-year-old acoustical studies graduate student in the Peabody Conservatory's Recording Arts and Sciences Department, started getting emails from news outlets and publishers almost immediately after starting the blog in July 2016. "People were calling me and asking, Do you have an agent?" she says. "I just kept writing, twice a week, and it got bigger and bigger. It's almost been a year of McMansion Hell now, and it doesn't really slow down."

She's since been interviewed about the blog for Paper magazine, The Washington Post, Slate, Business Insider, The Hairpin, and Der Spiegel in Germany, in addition to appearing on the 99% Invisible podcast. In January, she gave a talk titled "What's a McMansion—and how can we prevent more of them?" at the TEDxMidAtlantic conference in Washington, D.C. And she's started writing about architecture and acoustics for the real estate blog Curbed, the travel site Atlas Obscura, and DIY design and décor site Curbly, all while working on a "McMansion Hell" book proposal.

Though Wagner's undergraduate degree is in music composition, she has been studying architecture on her own since she was a kid. By middle school, the forests surrounding her small hometown of Southern Pines, North Carolina, had begun to be cleared to make room for these too large, cheaply built homes. She admits that her "hatred of McMansions comes a lot from the wastefulness of them, both environmental and otherwise."

Part of McMansion Hell's appeal is Wagner's wit, as she's sharpened her hatred into a blade that satirizes the visual and lifestyle vapidity of luxury homes. That backyard area with a large gas grill? That's a "sad dad zone." A single, inexplicably round window on a facade full of rectangular ones? "Ahoy, mateys."

What elevates McMansion Hell above aiming a bazooka at easy prey is her thoughtful satire of conspicuous consumption. "Underneath or alongside all the dank memeness of the blog and her annotations, Wagner builds the political and economic context in an almost subliminal way," says Fred Scharmen, an assistant professor of design and urban planning at Morgan State University's School of Architecture and Planning. He points to her recurring use of the phrase "stock market recession roofline" and Ronald Reagan as the blog's avatar, alluding to how deregulation of savings and loan associations in the early 1980s contributed to expanded lending practices, increases in home sizes and prices, and the garish display of wealth through upper-middle-class real estate. "In stealth, McMansion Hell never lets us forget the sins that landed us here."

And Wagner is very aware of what she's doing. McMansion Hell "is about the display of wealth, how wealth looks to other people. That's kind of the Donald Trump aesthetic, right? Donald Trump is what a poor person thinks a rich person looks like, and McMansions are what an ignorant person thinks a mansion looks like. The great irony is that being within an upper class doesn't give you taste."

So far, nobody living in any of the homes she's satirized on the blog has contacted her. She says she's heard from real estate agents, who tell her how impossible these houses are to sell. But an actual McMansion owner? "No, but I'm waiting for that email every day."