A pioneer of the Johns Hopkins Wading Team looks back

The Johns Hopkins Wading Team has a proud 600-year heritage. One of its co-founders reflects on his varsity career. 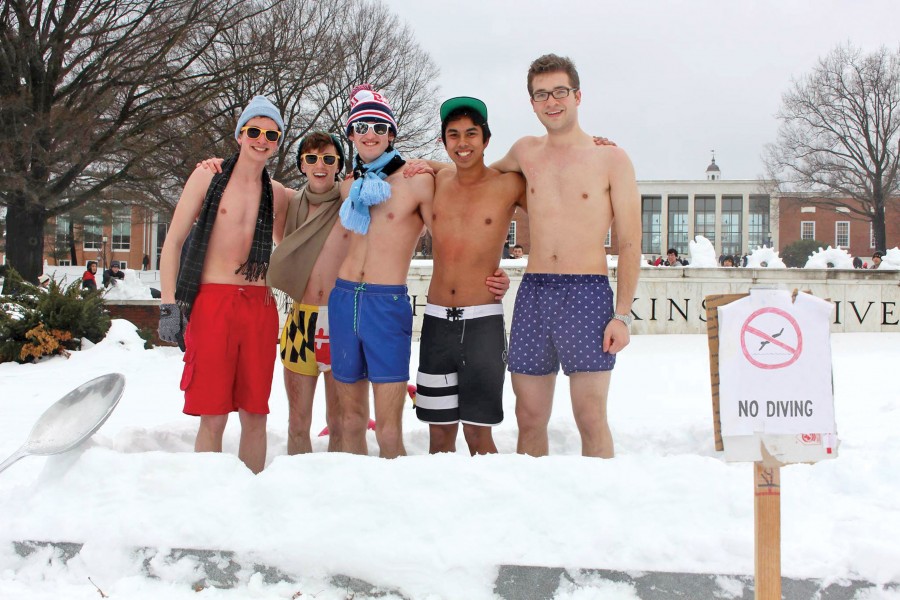 The Johns Hopkins Wading Team, perennial leaders in the sport of intercollegiate kiddie pool wading, lists its founding date as January 22, 1446, "30 years before the university was [established]," which suggests an absence of math or history majors among its varsity lineup. Or maybe they're spoofing; hard to say. Be that as it may, the team is a genuine, university-sanctioned student club, and we've not heard any challenges to its claim of the longest-running rivalry in intercollegiate sports with Harvard's waders, the Sea Urchins. Home matches on the Beach are a popular student attraction, and for three years running, the team perched at the top of the annual U.S. News national wading rankings, beating out such perennial powers as El Camino College, Duke, MIT, and L'Academie de Cuisine. At least, that's what the team says on its Facebook page, so it must be true.

Johns Hopkins Magazine recently spoke to Nathan Choe, A&S '15, one of the team's co-founders (which means he looks so much younger than his nearly 600 years; waders really hold up). In his varsity days, Choe was a specialist in the speed category, which he describes as "the final stretch of the match when both teams have to empty the pools of water and air, fold them up, and get them back into their boxes as fast as possible."

Johns Hopkins Magazine You're one of the pioneers of wading as an intercollegiate sport. What does that legacy mean to you?

Nathan Choe Wading, to me, is more than just a sport. Wading is a way of life. Even though I have not participated in any competitive wades this year, I still feel the rush of pool water—which is a mixture of tap and a dribble of urine—flowing through my veins. The patience that I had to foster, sitting in that pool for hours on end, helps me get through each day of teaching ninth-graders. The camaraderie between waders was addicting, and it pushes me to seek all the joys in life. The pressure to constantly improve our setup and take-down times still drives me to get better and faster and more consistent at everything that I do. This is the legacy of the wading team. Sure, I can sit in a pool for 14 hours. And yes, I can deflate the pool, fold it up, and get it back into its box in less than three minutes. But the real, lasting impact of the wading team, of all the wading teams across America, is the spirit of the wader that will never leave our souls. We will always push ourselves to be a little stronger, to be a little faster, to hold our bladders a little longer.

JHM Did you come to wading late as a sport, or were you one of those kids who was always splashing in a puddle or walking around with a deflated pool in your hand?

NC My love of wading did not start at Johns Hopkins. There's a saying that goes, "We are all born waders, for we all wade in the womb." Unlike many others, I never quite left the water, however. Whether I was jumping around in the sprinklers in elementary school or swimming on a team during my teenage years, I always had a fondness, nay a respect, for the water. She is uncontrollable, insatiable, and dangerous but is also the sweetest nectar from which I've ever sipped. In the beginning of a wade on a hot summer day, there is no better embrace than hers, but at the end of 10 hours, her touch corrupts our skin, in much the same way as time, causing wrinkles in the flesh and the soul.

JHM Where do you think your dedication came from?

NC They say that a smooth sea never made for a skilled sailor. It's not the brine, nor the wind, nor the long expeditions to sea that really harden a seaman, but rather the water, in crashing waves or still kiddie pools, that makes a man.

JHM You had a stellar career with many highlights. Do any of your wades stand out now as you look back?

NC Looking back is definitely a bittersweet experience, but there are surely some wades that have stuck with me more over the years. There was our wade against the University of Alaska Pacific, which occurred in the snow. Though we had expected it to be brutal, we had not expected the stakes to be so high and the temperature so low. Thirty minutes into the wade, one of our teammates, Ian Anderson, fainted from hypothermia. Seeing as his body was still in the pool, the time kept running, so we had a debate about whether or not we should stop the wade. After we could not revive him in a minute, we ended the endurance portion, ultimately costing us the match. The University of Alaska Pacific basically had home-court advantage, and it showed.

JHM How do you feel about the sport's explosive growth?

NC I'm very happy that wading has gotten the traction that it has. I changed a lot in college. The independence, the responsibility, the challenging course load all pushed me to change and grow as an adult. But the wading team, with its fun-loving, perfectionist tendencies, forced me to grow even more than I imagined possible. The spread of the sport only means that more students will get the experience that I received.

JHM The team's constitution reads, "The Johns Hopkins Wading Team plans to revitalize the University's sometimes (most of the time) downtrodden student body by showing our spirit, our lightheartedness, and our unquenchable desire to sit in about a foot of water." Do you feel, retrospectively, "mission accomplished"?

NC It definitely feels like we've helped increase the spirit at Johns Hopkins. Not only do people show up at our events, cheer for us, and join us for our tailgates, but people also love talking about the wading team when talking about JHU. Johns Hopkins, I think undeservedly, gets a cutthroat, austere reputation, and I think that the wading team serves as a perfect foil. The wading team is so effective at raising spirits because it is everything that Johns Hopkins is not "supposed" to be. It's silly, it's a powerhouse sports team, and it's fun for the sake of fun.

JHM The end of an intercollegiate wading career must be tough, with no pro league to go to. More than a few great athletes have had a hard time dealing with retirement. You have moved on to rewarding work teaching ninth-grade algebra in Baltimore, but otherwise what has life been like for you since hanging up the flip-flops?

NC Life hasn't been the same since the wading team. When you go through years of your life on such a strict regimen with the same people day in and day out, it's hard adjusting to a "normal" life. There have been times when I realize that I've been in the bathtub for hours and other times when I would just empty my trash on the ground, following the same motion we'd practice for emptying buckets of water into the pool. Sometimes, I shower in cold water, partly to bring back the warm nostalgia of freezing wades and partly to numb the emptiness that I occasionally feel. Being on the wading team has certainly pushed me to become a better person and, though it has propelled me into a life that doesn't seem that difficult by comparison, I do miss the team. Looking back, it was a great time in my life and has really made me who I am. And sometimes, I really long to hop back into that pool. But like any wade, that chapter had to come to a close. It was time to fold that part of my life up and pack it back into the box until, maybe one day, I get to pull it back out, pump some air into it, and hop right back in. 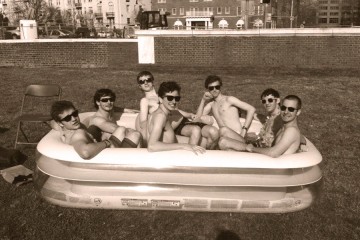