Raising profile of sport, goofing around are the chief goals of one of Homewood's newest undergraduate groups 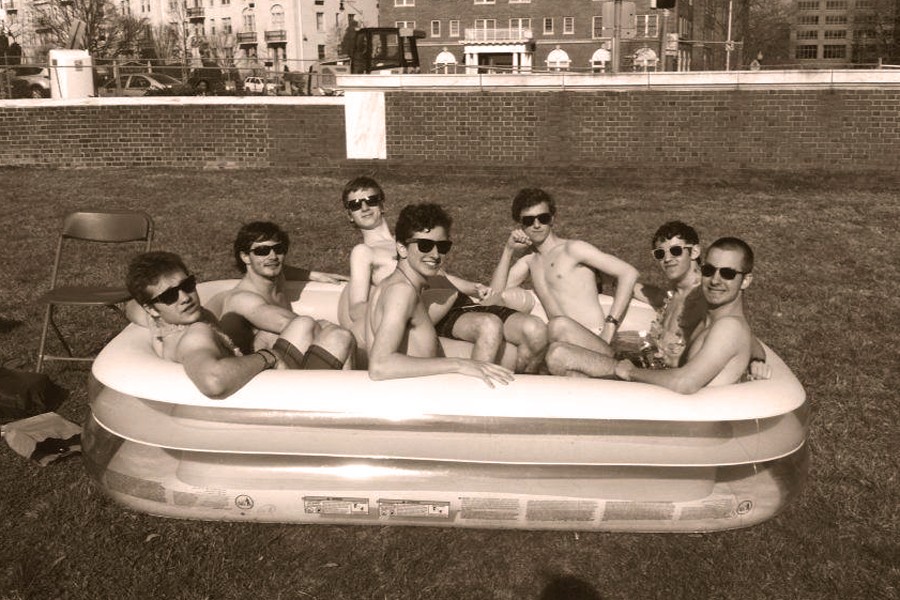 Image caption: The Hopkins Wading Team during its inaugural wade in the spring of 2013.

The first thing you should know about the Johns Hopkins Wading Team is that nobody is forcing its members to look silly. No, they are not rushing a frat. Nor are they on the losing end of a triple-dog dare. They are just a group of guys, holding court on the quad in an inflatable pool. Competitively.

Though their chief rival is a made-up team from Harvard, this newly sanctioned student group takes its fictional grudge matches very seriously, embracing teammates' inherent sense of whimsy while stirring up a little school spirit along the way, according to the Oct. 3 edition of The Johns Hopkins News-Letter.

Sophomores Nicholas Mehrle and Travis Schmauss told The News-Letter that their "first wade" on the Beach this past spring was met with some consternation by classmates who worried that there was some waterborne form of hazing afoot. The head scratching and concern got the waders thinking about how they could formalize their union, leading them to seek SGA recognition as a way to lighten the mood on campus.

In addition to a wider audience for the sport, SGA affiliation could also flush out funding from the Student Activities Commission to pay for heaters that would make winter wading a dream come true. Becoming more, well, liquid would also help the wading team achieve its biggest goal: attracting more students to the ... uh ... sport.

For the uninitiated, the News-Letter shared the following set of rules:

"Then there's also the 'take down,' which is one of the main events. After you're done wading, you have to empty the pool, deflate it and roll it up."

When asked if completing all these stages faster than an opposing team constituted a competitive victory, Mehrle's response was wholeheartedly in the affirmative.

The wading team isn't the only new group to make a splash with the SGA. The News-Letter reports that Homewood student leaders also gave their blessing to the Thai Students' Association and the Scuba Club at its Oct. 1 meeting.