Renovations to the Apocalypse mural reawaken its message 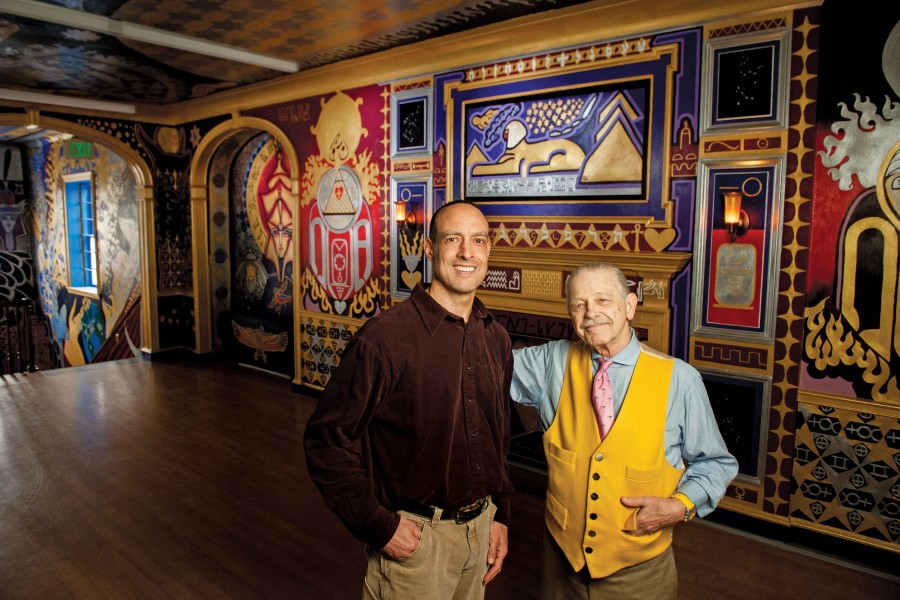 —Reverend Chester Wickwire
to Bob Hieronimus, back when
peace and love were cool

The dean of Baltimore muralists at 72, Robert Hieronimus took on his first commission almost 50 years ago: the word SOUL in flaming letters on a black-owned nightclub near downtown Baltimore. While on the scaffolding, Hieronimus says, he heard shouting from passing vehicles, white men enraged that a white guy was working for a black boss. His second mural was a clown on the side of a grocery story in Ocean City, Maryland. With mural number three—started in late summer 1968, completed in February 1969, and recently restored—Hieronimus came into his own: a groovy piece of poignancy and provocation called Apocalypse.

"The mural's central theme is 'We the People,' 99 percent of us challenging corporate America—the 1 percent. That's what needs to be understood today," says Hieronimus. Ancient birds and pyramids; brains that take the shape of crabs; the depths of Atlantis plumbed; and Stars of David above what looks like a ring of pomegranates (not unlike prayer beads) near a human arm. The mural looks as though Hieronimus documented his every dream of the distant past and more distant planets.

Of his many projects, including a psychedelic VW hippie bus immortalized at Woodstock, Hieronimus calls Apocalypse his favorite and deepest work. "The message is that history is cyclical, that the global environmental upheaval we are facing has happened many times before and will continue to repeat until we learn to live in balance and peace," says Hieronimus.

The 2,700-square-foot mural had not fared well over the past half-century. "It was in total disrepair," says Hieronimus. "Entire areas had been whited out. Shelves had been screwed into the alcoves, so for years you couldn't see parts of the mural. The walls were weak, so we had to plaster again after taking out the shelves."

Unveiled once again during Johns Hopkins 2016 Alumni Weekend, Apocalypse—and its message of caution—has graced Levering Hall, covering every wall of the room that holds it, for nearly 50 years. Its overhaul cost an estimated $70,000, according to Hieronimus, known to friends as Doctor Bob (he holds a PhD in psychology). The university contributed $10,000, along with scaffolding, supplies, and $12,000 in new lighting and furniture for the room, home to the university's after-school tutoring program for Baltimore City elementary school students. The remaining funds came from the Joseph and Harvey Meyerhoff Family Charitable Funds and a contribution from Doctor Bob's wife, Zohara Meyerhoff Hieronimus.

Doctor Bob was aided in the restoration by a team of Baltimore graduate students, and he proudly notes that each person who helped him restore the mural earned a minimum of $20 an hour. Justin Williams, a senior lecturer in the Whiting School's Department of Geography and Environmental Engineering, acted as foreman of the restoration project. Williams has worked with Hieronimus in the past, notably on a larger-than-life mural of larger-than-life legends (Bob Dylan, Gandhi, Bob Marley, and others) on the side of a Greenmount Avenue building in Waverly, Baltimore. "Justin literally stumbled into our partnership one day while walking by the [Waverly mural] when we were restoring it," says Hieronimus. "Turns out this engineer is also a talented artist and a good manager." Williams went on to help Hieronimus with three other murals and two "art car" projects, in which psychedelic designs give otherwise normal vehicles a colorful makeover.

Williams, who has taught at Johns Hopkins for the past 12 years, was asked if the new generation shared the values expressed in Doctor Bob's art. "We're seeing a lot of it now," he says. "There's a higher level of planetary consciousness; you see it with the popularity of Bernie Sanders with young people. Progressive ideas are alive and well." Those ideas, along with highlights of student activism at the university through the decades, were celebrated at the unveiling, which included remarks from Johns Hopkins President Ronald J. Daniels and a presentation by Stuart W. Leslie, a professor in the Krieger School of Arts and Sciences who is writing a history of the university.

In previous interviews, Leslie noted that thousands of people have "walked right by the Apocalypse mural without taking the time to look at it." Like so much activism that took place at Homewood in the era when Jimi Hendrix (whom Hieronimus befriended) electrified "The Star-Spangled Banner," Apocalypse is rooted in the spirit of the incomparable Johns Hopkins chaplain Chester Wickwire, who died in 2008 after more than 50 years serving Johns Hopkins. "Chester commissioned the mural and gave me total freedom to tell people that America was going in the wrong direction," says Hieronimus. "I had no idea how true the message was going to remain all these years later." 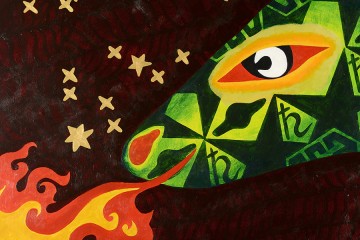 'Apocalypse' then and now