'The Apocalypse' then and now: JHU's massive 1960s mural gets a much-needed makeover

Johns Hopkins University Professor Bill Leslie and artist Bob Hieronimus flash back to the late 1960s at the Homewood campus on Friday from 4-6:30 p.m. for a lecture titled Apocalypse Now: Social Justice and Civil Rights at Hopkins, part of the JHU's Alumni Weekend celebration.

Leslie, a Department of History of Science and Technology professor who is writing a history of the university as part of the Hopkins Retrospective project, will talk about the roots of social justice and civil rights activism at the university. Hieronimus—artist, writer, and radio host—will discuss his floor-to-ceiling mural, The Apocalypse.

In 1968, then Johns Hopkins Chaplain Chester Wickwire asked Hieronimus if he would paint a mural on a second-floor wall of Levering Hall, a room known as Chester's Place that served as a coffee-shop gathering spot and music venue for students. Hieronimus' work brought together visual art and the science of symbols. Flowers, hearts, serpents, five-pointed stars—these had ancient meanings for him, and he used them to talk about what he observed happening in the world around him.

"It is improved by so much. It's never looked better."
Bob Hieronimus, artist

The Apocalypse had endured some wear and tear in the four decades since it was first painted. So over several months last year, Hieronimus and a team of hired artists repaired and restored the mural thanks to funding provided by the Joseph and Harvey Meyerhoff Family Charitable Funds, Johns Hopkins University, and Zohara Hieronimus.

It was an ambitious undertaking. Holes, nails, screws had been hammered and drilled into the mural's walls to support various office shelving and storage. Walls needed to be re-plastered to remain structurally sound. Roofers were contacted to determine the source of dampness behind one wall. Carpenters and electricians were brought in to help replace fixtures and solve lighting challenges. And because JHU and Baltimore City students use the room as part of the Tutorial Project, the artists were required to replace the mural's oil-based gold and silver paint with non-toxic water-based paint—which required multiple coats.

In the end, Hieronimus had to upgrade his crew from four to eight artists, as nearly the entire 2,700-square-foot mural needed to be whited-out, redrawn, and then repainted three times.

"It was quite a shock at the beginning because I had no idea that the destruction was almost total," Hieronimus says. "This was terribly depressing mainly because it meant that we had to do three times the amount of work that we had proposed. We were just going to come in and restore, but we were repainting."

It was taxing work—Hieronimus says that even with today's scaffolding equipment, the mural's ceilings were as challenging now as they were in 1968 when he painted with a long board stretched between ladders—but the results are dramatic.

"There was nothing that was not repainted, and that's why the gold and the silver just have a kind of lightning about them," Hieronimus says. "They just open up one's heart emotionally. And the three coats give it a durability. We know that there's a lot of activity that goes on in that room and we know that now and then it's going to get scratched, but we've worked it out with Hopkins that when that happens, they will take care of that." Hieronimus adds that JHU has "bent over backward" to help with the restoration process.

Hieronimus, 72, documented the restoration in a series of newsletters. The assisting artists got a crash course in the symbolism Hieronimus used in the massive mural.

"Each and every one got a dictionary of symbols that they had to read interpreting the mural," he says. "I wanted them to understand—not believe—why it was put where it was, which symbols were used, and that helped a great deal because they realized everything, every stroke, has a meaning."

For Friday's lecture—which will be streamed live on the Johns Hopkins UStream channel—Hieronimus will make available a short mural guide that interprets its symbolism. The pride the artist takes in his now 46-year old work and its restored appearance is unmistakable.

"It is improved by so much," Hieronimus says. "It's never looked better."

Panoramic view of the restored staircase 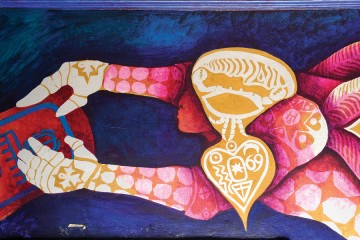