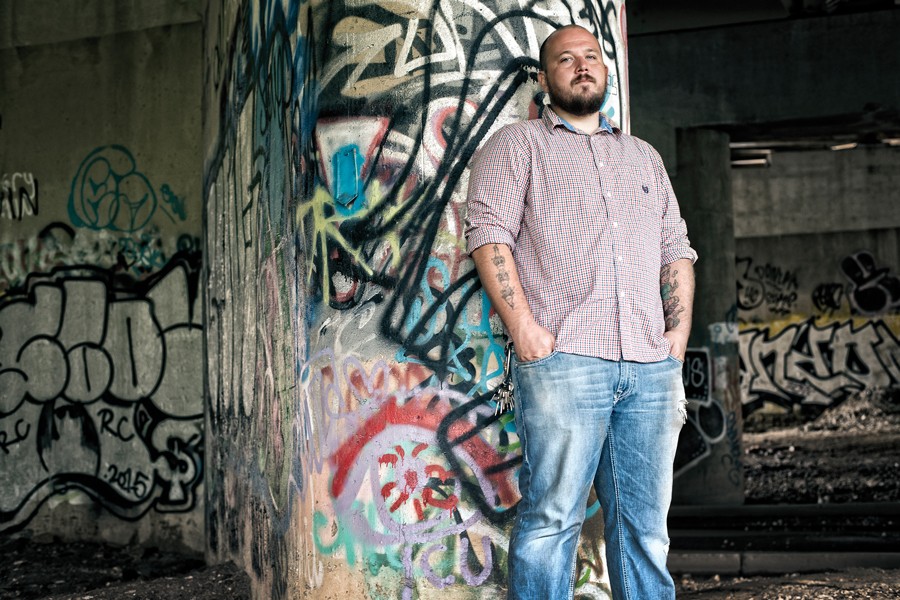 Richard Best had to find Buddha. If he wanted to see the place his artist friend Stefan Ways said was a cool spot for street art—that umbrella term for any sort of public urban art, including stencils, spray-painted murals, and posters—he had to follow Ways' winding directions. He had to walk around the Fox Building on the Maryland Institute College of Art's campus in midtown Baltimore to the Buddha sculpture behind it. Turn right. Duck under the surveillance camera. Hop down a wall to the railroad tracks. Cross them, pass through a tunnel. Turn right again.

An occasional wheatpaste poster artist himself, Best was impressed once he got there. "I was really blown away that there was this space that a community of artists had found value in that no one else cares about," he says. Street artists had covered the concrete pillars and walls that support the Jones Falls Expressway passing overhead with spray-painted murals. Aside from the art, the space was a patch of dirt, grass, a few trees, and urban debris, but Best, Bus '14 (MBA), saw something more. "It was completely abandoned, but it could be amazing. It should be a public space, a new kind of park—an art park."

At the time, Best was in his first semester of the inaugural Design Leadership dual-degree program administered by the Carey Business School and MICA. A Georgia native who moved to Baltimore as a defense contractor, Best had allowed his street art to idle in the background of his professional life. The Carey/MICA MBA/MA offered a balance of business and art that Best wanted to explore as an entrepreneur. He saw potential in this 3.5-acre parcel of land located under the highway and made the park his MBA capstone project. While he was in school he created Section1, a nonprofit organization whose mission is to turn underutilized spaces into creative cultural hubs.

This particular park, which Best envisions as a space for street art, skateboarding, and live music (three of his abiding interests) is Section 1's debut project. Best had been attracted to Design Leadership's focus on human-centered design, where a project is shaped by input from the people who will eventually use it. "I think that's the future of business, looking holistically at what's going to create value for the groups that use it," he says. "How a muralist on a lift and a skateboarder interact is going to be interesting, as are how skateboardable surfaces and a music stage go together. We want to go to these creative com­munities and say, 'Let's develop a park that's going to be designed to all of our best interests.'"

Best's Jones Falls underpass project is similar in spirit to recent celebrated renewal efforts such as the High Line, a 1.45-mile elevated train track in lower Manhattan converted into an urban park; Wynwood Walls, the Miami ware­house district that was transformed into a street art showcase; and 5 Pointz, the now-demolished Queens building that became a world-renowned mural mecca. Best talked up such projects throughout 2014 as he contacted city offices and the organizations whose properties adjoin the park's site—Amtrak, the Maryland Transit Administration, MICA, and the University of Baltimore. All were excited about the park's prospects. Best assembled a Section1 advisory team, which included local developers, to help him out. Now all he had to do was find out who owned the land, secure a long-term lease, and start more directed fundraising. (Currently, Section1 has raised money through a few fundraising events, private donations and grants, and selling art bonds, where street artists donated work to be sold and the proceeds go to the organization.)

City records initially indicated that the MTA owned the land, as it abuts the light rail tracks. But the MTA didn't have paperwork documenting its ownership of the entire plot. Section1 hired a survey team to figure out that the land is owned by four different organizations: the city of Baltimore, the University of Baltimore, the MTA, and Northern Central Railway, a company that operated from 1858 to 1976. And finding out who the resident agent is for a company that folded four decades back has proved to be a bit complicated. "That's been the big challenge in obtaining the space," Best says, noting that this entire process took about a year and that they're still in talks about obtaining the land.

"Cities have walking parks and bike parks, but they don't have art parks—so where do street artists go?" Best says. "There is nowhere. So when an artist wants to paint something, what do they do? They go paint a train, they go [paint] a building. We want to make art parks for them." 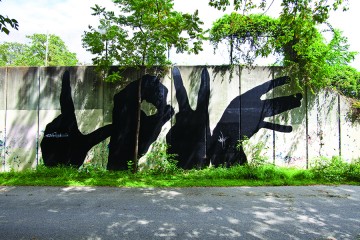