For the guys behind the Baltimore Love Project, it's a labor of love 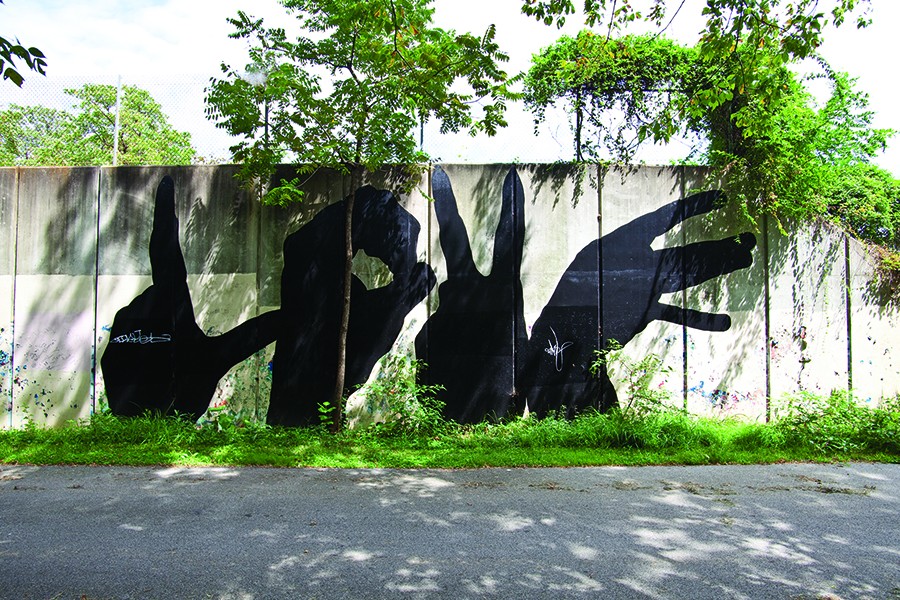 Scott Burkholder, Engr '02, and Michael Owen were friends of friends back in 2004 when Burkholder recruited Owen to help him paint houses for his business. "He was just a guy on a job site with me," Burkholder says. "We'd spend eight to 10 hours a day painting people's living rooms, and we just started to value the relationship and the perspectives that we had." Paintbrushes in hand, they would stand on tarp-covered floors and talk about philosophy, personal expression, and love. "We'd talk about things like the need for creativity and art," Owen adds. "You spend hours painting a flat wall with the same person next to you, and there's a lot of conversation that happens."

Those conversations, born out of boredom, led the chemical engineering major to embark on a five-year journey to connect Baltimore's diverse neighborhoods with a message of love—in very big letters.

In 2008, Owen approached Burkholder and showed him a sketch in his notebook of hands spelling out the word LOVE. Owen, who was interested in murals as an artistic medium, said he wanted to put the image in public spaces throughout the city. "The nature of the image, I just didn't feel comfortable putting it in one neighborhood," says Owen, the creator and lead artist. "I thought it was important to spread out the message democratically, in a way that wasn't tied to money or politics or personal interests, but rather connecting neighborhoods."

Owen was the creative guy. He needed someone to track dollars and cents in spreadsheets and plan meetings with key community leaders while still maintaining the artistic integrity of the project. "I realized that I have a skillset that sometimes artists don't have—that logical, practical mindset that can be used in business," Burkholder says. He became the executive director of the Baltimore Love Project.

The project was Burkholder's first foray into arts management, and he admits things didn't exactly go according to plan. The duo estimated that each mural would cost about $5,500, including paint, rented equipment such as a lift, labor, and marketing expenses. To reach their goal of painting 20 walls throughout the city, they thought they would need to raise roughly $120,000. And the donations did come flowing in from corporate sponsors, patrons, crowdfunding websites, and merchandise sales. But Burkholder says the budget should have been close to $300,000 if they had charged for the time they spent making the project a reality.

Today, it's hard to complete a daily commute through Baltimore without seeing one of the Love Project's murals. The team reached its goal of 20 murals in August 2013. Burkholder and Owen say the murals have had as varied an impact on people as the word "love" itself. "It's such a powerful word and so relatable to so many people, but there's no 'it means this,'" Burkholder says. "I want people to walk away knowing that whatever is moved within them is appropriate."

"This is not just the project I'm best known for, it's also the most heavy subject I've tried to deal with as an artist," Owen explains. "It's the most powerful thing. It's just crazy. Love's crazy."

Street art has become more popular in recent years, Owen says, and with it, interest in installing the murals outside of Baltimore has grown. He recently completed a LOVE mural in Detroit and has secured a contract to paint one in Madison, Wisconsin. Rafael Alvarez, former Baltimore Sun reporter and writer for The Wire, is working on a book about the venture.

Burkholder is stepping down from his role as executive director, and he recently became an administrative manager for the director of the Baltimore Museum of Art. He says the project has forever changed him. "As we talk about what love means and how I ended up promoting art, to me they're one and the same. It's about being empathetic and allowing other people's perspectives and values and views to seep into your life and impact you. That's something I will cherish about the opportunity to work on the project. It will impact me for the rest of my life."