Douglas Hough came to Johns Hopkins a dozen years ago to teach economics in the Business of Medicine program. He was a prophet of Adam Smith and Smith's metaphorical "invisible hand" at the heart of mainstream economics. Classrooms full of seasoned health care providers soon taught him to be a Smith apostate. "The invisible hand wasn't working for them," Hough says of his early students. "They tolerated the theories but really weren't buying the conclusions." The problem? Standard economics posits that self-interest drives people to act rationally in the marketplace. But when that marketplace is a hospital or doctor's office? Students spoke of patients demanding useless tests, ignoring treatment regimens, acting irrationally amid their aches and pains.

In response, Hough began opening his curriculum to the barely 30-year-old field of behavioral economics. Behavioral economics draws on the perspectives, hypotheses, and studies of behavioral psychologists to explain marketplace behaviors. No, people are not always rational, behavioral economists say, but their irrationality at least happens in predictable ways. Hough's students stopped squirming in their seats—"They were going, 'Yeah, yeah, this makes more sense,'" Hough says—and the professor was well on his way to chucking out more than 200 years of economic theory.

However you look at it, the U.S. national health care system is sick—a beast consuming 18 percent of gross domestic product while leaving millions without health insurance. "In health care, imperfect people are making imperfect decisions, and behavioral economics does a better job than mainstream economics in explaining and predicting this reality," Hough says. It's a case he sets out to make in his new book, Irrationality in Health Care: What Behavioral Economics Reveals About What We Do and Why (Stanford University Press, 2013), which is built around the economic behaviorist's take on 23 health care anomalies. Why do patients insist on getting a prescription or having a procedure performed when they visit a doctor? Why do tens of thousands of patients die each year from hospital-acquired infections when a simple five-step checklist used by physicians and nurses could reduce that number by two-thirds? Why would requiring everyone to buy health insurance make everyone—including those who don't want to buy health insurance—better off?

For answers, Hough eschews the rigid world of mathematics at the heart of standard economics for the multifaceted world of behavioral psychology. So, patients who demand pills or tests when symptoms send them to the doctor do so because of an "action bias," wherein people are predisposed to the idea that doing something is better than doing nothing, even though watchful waiting might be the most rational course. (This is how patients with virus-based common colds end up with prescriptions for antibiotics that do nothing against viruses.) And doctors' resistance to checklists has a tangle of psychological roots, chief among them the perception that checklists usurp their authority, and so they spurn them because of a psychological concept called "loss aversion."

Hough, who now holds joint appointments in the Bloomberg School of Public Health and Carey Business School, concedes there is much work yet to do testing behavioral economics' applicability to medicine. His book concludes with a proposed research agenda. "What's clear is that standard economics is not working in health care and maybe the solution is to stop beating on the old paradigm," says Hough. "What behavioral economics can do is demonstrate that the invisible hand has very stubby fingers." 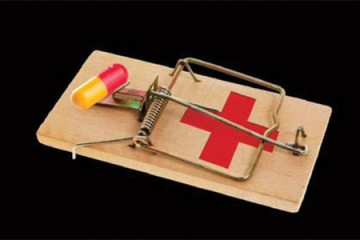 The economy of health