The read on culture 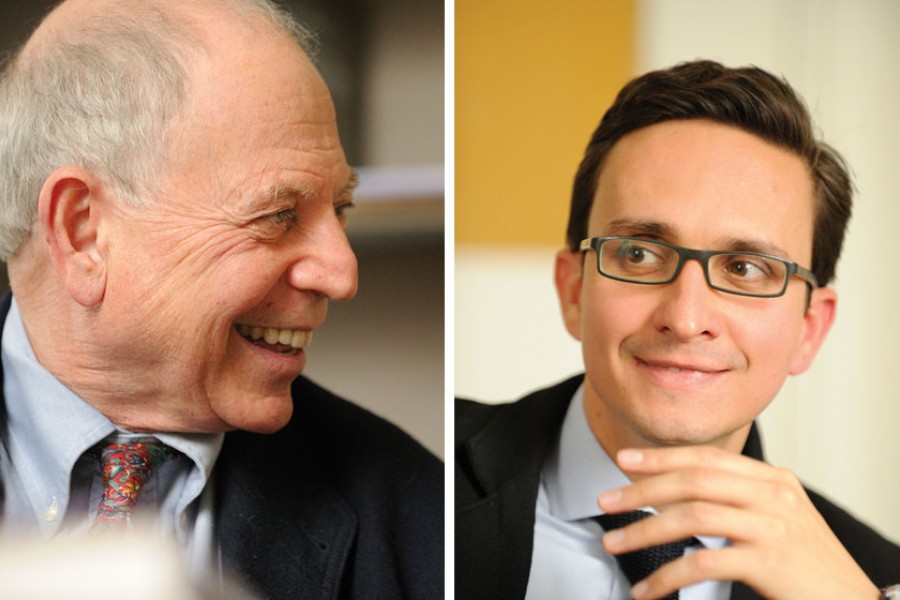 Image caption: Richard Kagan is a professor in the Department of History and has a joint appointment in the Department of German and Romance Languages and Literatures in the Krieger School of Arts and Sciences. He specializes in early modern European history, with an emphasis on Spain and the Iberian expansion. Manuel Colás-Gil teaches an introductory course on Spanish Golden Age literature at the Carlos III University of Madrid. This spring, he also taught a course on Don Quixote. Since 2005, he has worked for the Hopkins Madrid study abroad program and has served as its resident director since 2010.

For Manuel Col&aacute;s-Gil, A&S '09 (PhD), the possibility of working with professor Richard Kagan, who has taught early modern European history since 1972, was a bonus in his decision to pursue his doctorate in Romance languages at Johns Hopkins. Although Col&aacute;s-Gil gravitates toward literature and Kagan is a historian, the two are fascinated by the same period: the Spanish Golden Age from the late 15th century to the mid-17th century, when literature and the arts flourished across the country. By the time he graduated, Col&aacute;s-Gil, who focused on 16th- and 17th-century Spanish literature, had completed several of Kagan's Spanish history seminars on subjects ranging from religion and the Inquisition to architecture and cities. In January 2011, Kagan and Col&aacute;s-Gil co-taught a seminar on Spanish history and culture as part of a three-week study abroad intersession in Madrid. On a recent trip to Baltimore, Col&aacute;s-Gil, now resident director of Johns Hopkins' study abroad program in Madrid, visited Kagan in his book-strewn office, where the two talked about the role literature plays in uncovering a culture's past.

Richard The Golden Age of Spain and its society are what I find interesting. The law, the history, the fiction and literature—they are all subsets. They're a way to learn more about this particular time and place and its culture.

Manuel Spain is well-known for parties and running the bulls, and sangria. But if you talk about all the early modern history, you really have to talk about paintings, architecture, sculptures, and urban history, including how the cities developed.

R Right. We have history, we have architectural history, we have religious history and literature. These are different windows into that time. We have some great works of literature like Don Quixote. And then we have documents that are stored in archives and libraries around Spain and other parts of the world. But they just provide us with glimpses. One of the tasks of the historian, or the literary historian, is to reconstruct this world, to get a better sense of it, and to see how its people use history to define their own sense of self.

M We are actually covering a period of Spanish history in which, even though most of the population couldn't read, Spaniards were obsessed with the written word. . . . Not only literature, but other kinds of work and discourses. Still, there was a lot of fiction, and there was also a huge debate about the legitimacy of fiction. I just study how history is represented in prose. This is fiction. It's false. It never existed. It never happened. But it's very interesting how the culture of early modern Spain affected how the authors of that time represented the society in literature.

M Yes, it was published in 1614. But at that time, there wasn't copyright. When a work of fiction became extremely successful, other authors just wrote a continuation or a second part. Miguel de Cervantes published his Don Quixote in two books in 1605 and 1615. In the second book, Cervantes condemns the false continuation and kills his hero. Don Quixote dies at the end so there can be no other continuation of his story.

R But we can learn from that false version, too. In it, the town priest recommends that Don Quixote read Lives of Saints because it was full of stories about virtues and exemplary deeds.

M At that time, Lives of Saints was the kind of story people should be reading, according to the church. Because it was true. Don Quixote had read libros de romances, which are chivalric tales or adventures, but he read them irresponsibly and thought that those stories were true. That's when he decided to become a knight and imitate the lives of those fictional heroes. His actions show why these romances of chivalry were condemned and prohibited by moralists and the church—they thought the books contained false stories that could affect the reader's conduct. So, in Avellaneda's book, the town priest recommends that Don Quixote read Lives of Saints in order for him to recover his sanity. Cervantes said people could read whatever they want, though. They should just make sure that after they close the book, they go back to their social, professional, and family responsibilities. You did not bring art into life.

R From a historian's point of view, this is another way to understand what a culture thinks about itself. Spain is one of these early modern medieval societies in which religion occupied the entire social sphere. People defined themselves in religious terms, which is so different from many Americans. Post-Enlightenment Americans mostly keep society and religion apart. But we don't want to judge an era by our own standards. We want to judge it by the standards of that time. One of the most interesting and perhaps most accessible ways of understanding a time period is through literature. In fiction there are stock types, there are figures, there are stories. These books offer a wider lens on society. If you don't know the literature of a particular era, I don't think you can be a historian of that era.

M But historians have to be very careful when they read fiction. It's not like reading a legal document. These books are a product of someone's imagination. A fantasy.

R That's an important point. Because 100 years ago, historians would say that fiction is a faithful reflection of society. Now we know that it's a projection. Nevertheless, it's the way that some people want that society to be represented, and that can tell you a lot about the values of the time. You can't do history without literature.

M And you cannot do literature without history.