Travel schedule: In the last 24 months, she has traveled to Cambodia, Peru, Nicaragua, the Philippines, Singapore, Thailand, and Ecuador.

Your project at the Applied Physics Laboratory is called SAGES. What exactly is that? 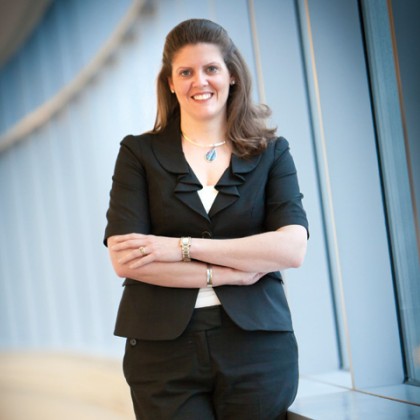 Image caption:Sheri Lewis is the Global Disease Surveillance program manager in the Applied Physics Laboratorys Homeland Protection Business Area, where she works with a team of analysts, epidemiologists, physicians, and computer scientists who are leaders in the field of electronic disease surveillance.

The Suite for Automated Global Electronic bioSurveillance is an assortment of software tools that facilitate rapid collection and analysis of health data. We use tools we develop and, when available, existing platforms to monitor the outbreak, spread, and containment of emerging infectious diseases. Electronic disease surveillance (EDS) is relatively new, even in the U.S. As recently as 12 years ago data was not collected electronically, but with pen and paper. The goal with EDS is to identify disease outbreaks as early as possible, around the world.

What is new about the project?

The benefit of our project is that we can help identify a local outbreak immediately. Many epidemics are expected. Dengue fever is very commonplace—countries know they're going to have an outbreak every year. We can train individuals to use their cell phones to collect data if someone is seeing cases in an isolated village, for example. Governments can set up a voice-response phone tree to enter data about the age, gender, and number of cases. We use text-messaging systems, too, in countries where that is easier or less costly.

Why is this sort of public health work being done at APL?

APL has had a program known as ESSENCE (Electronic Surveillance System for the Early Notification of Community-based Epidemics) since the late 1990s. SAGES leverages the success of the existing system and adds components for analysis and visualization, communication, and modeling/simulation/evaluation. We're working with the Global Emerging Infections Surveillance and Response System, which is part of the Armed Forces Health Surveillance Center.

So all of your travel has to do with this global disease surveillance work?

Yes. But we are not conducting surveillance of other countries—we are helping them learn to do that on their own. Much of the work we do is teaching countries who ask for help from the United States how to collect their own data. The term surveillance is not as frightening a word in countries that don't have the same sense of personal privacy as here. But at the same time, in countries with high HIV and AIDS numbers, privacy remains a priority. We focus on collection of data and analytics to predict—and contain—the spread of emerging disease.

I'm assuming they interpret data as well as collect it . . .

Local governments interpret the data once they collect it. Interpretation has to be done carefully, though; for example, Twitter has to be monitored very carefully and specifically to ensure you get good data. In our own research on social media, for example, a researcher who was reviewing tweets for the word fever was inundated with the Twitter data for Bieber fever.

Ha! So what are you most frightened of?

My biggest worry is influenza. It's very easy to transmit. Every year there's genetic drift and the virus can change. H1N1 was scary—we were not nearly as prepared as we could have been. Diseases like SARS are a concern, too—any novel respiratory pathogen that could be on one side of the globe today and on our doorstep tomorrow.

Ah, like that film Contagion that came out last year. Did you see it?

I did! I watched all the way to the credits and saw that they had some of the best people in the field as technical advisers. It was good from an epidemiological perspective—the film showed well how the Gwyneth Paltrow character became the index case for a deadly outbreak, and how the epi investigators work as disease detectives.

We only deal with countries that ask for our assistance. We aren't everywhere. We aren't in the Middle East, for example. And we're not in Europe. We're mostly in Central and South America, Southeast Asia, and parts of Africa. We don't go to places that are too dangerous, though we're working with the World Health Organization in the refugee camps in Somalia.

What's the No. 1 thing people can do to keep from getting sick?

Wash your hands with soap and water and stay home if you're sick.

Traveling so much, do you ever get sick?

Never! So far, I've never even gotten sick from eating local food. I love authentic cooking, which is strange because I was such a picky eater growing up. I love Peruvian dishes, Thai food, Cambodian and Vietnamese food . . .

What is your least favorite food?