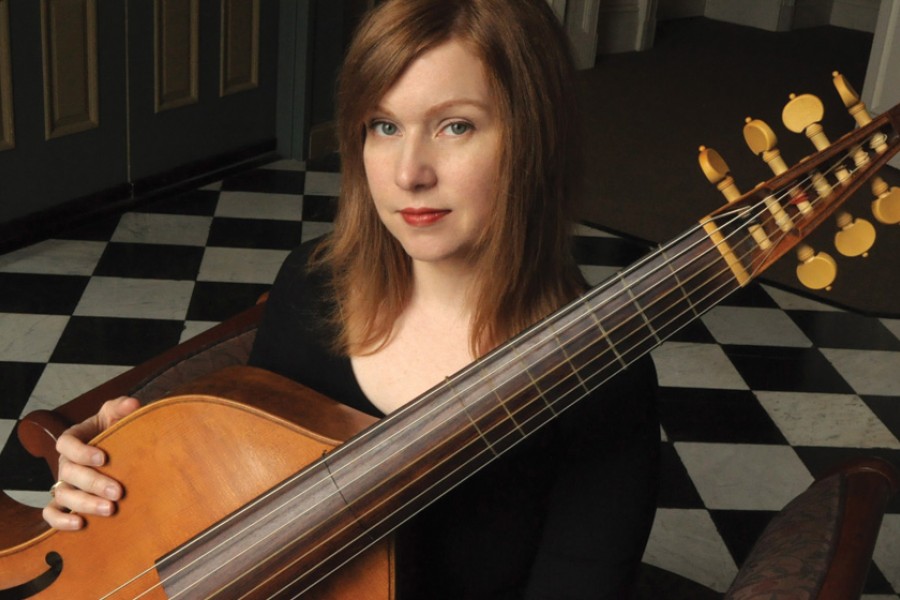 Spotting Amy Domingues, Peab '12 (MM), in a coffee shop isn't difficult. She's the stylish, auburn-haired woman lugging around an instrument case the size of a small refrigerator. It contains her viola da gamba, a fretted, seven-stringed instrument that looks a bit like the cello but has a much richer, velvety resonance. She was exposed to it in the 1990s through the recordings of famed viol player Jordi Savall and Alain Corneau's 1991 movie, Tous les Matins du Monde, starring G&eacute;rard Depardieu as composer and viol player Marin Marais. It wasn't only the instrument that attracted her but the creative space afforded by the viol's early music repertoire. Early music—the umbrella term for pre-baroque, pre-1600s Western music—appeals to her desire for an authorial voice. "It's different from mainstream classical music in that there is room for improvisation, because we don't know exactly how people played this music," she says.

Domingues says the viol was most popular in the 16th and 17th centuries, particularly in England, France, and Germany. As the cello became favored over the viol in orchestral music, people stopped playing and writing for it, which makes preparing an early music piece an interpretive process. "It's like a musical history detective game," Domingues says. "You have to constantly be researching how people would have played it. It's less cut and dried, in terms of what the musician's role is. A lot of it is not specifically notated on the page."

Domingues mentions that her husband, Stefan Bauschmid, a rock drummer who is not classically trained, has been enjoying early music more than baroque pieces. "The rhythms are a little more analogous to rhythms that we come across now in pop and rock music. Some have really complex stuff that's almost like math rock." She laughs over comparing early music with a genre of rhythmically complex guitar rock. But she has experience in both worlds. She grew up in an all-classical music household, taking up the piano at age 5 and the cello at 9, before earning a degree in cello performance from James Madison University. Though she hadn't encountered popular music until she was 11, once she became an undergraduate in Harrisonburg, Virginia, in the early 1990s she caught the rock bug hard. She was exposed to the underground music streaming out of nearby Washington, D.C., and started playing cello and bass in punk-inspired bands.

Then Jenny Toomey tapped her to join indie rock darling Tsunami for a national tour. "Cello is a really excellent instrument to incorporate into the rock mix because of the contrast of the sort of aggressive and the melodic components," says Toomey, who is now the Ford Foundation's program officer for media rights and access. "Amy seemed really balanced and smart and a great player. She plays with a lot of emotion, she doesn't phone it in, and it's clever." Domingues soon started plying her cello's melodic nuance off rock's jagged edges for a number of bands, becoming Washington's go-to cellist for hire and appearing on more than 50 recordings, from post-punk legend Fugazi to former H&uuml;sker D&uuml; leader Bob Mould. With Toomey's encouragement she started writing for herself, first on Wurlitzer and then on cello, forming the band Garland of Hours as the vehicle for her own songs in 2000.

Her music often combines a lyrical, layered melodic sense with rock's dynamic tempos to create an engaging hybrid, equal parts chamber music spaciousness and catchy pop. She put out Lucidia, her third album, earlier this year, and it includes a 16th-century viol piece.

"When I initially came to Peabody I was really trying not to tell anyone about my secret rock-and-roll past," she says. "I wanted to be taken seriously. And I didn't want people to be, like, 'Oh, she's this rock musician.' I wanted these things to be separate. But in some ways it's becoming obvious that each can inform the other."

Last year she joined Sonnambula, a New York-based early music consort that is, like a number of contemporary classical ensembles, taking the music out of the symphony hall and bringing it to churches and art spaces. It's hard work—she typically heads up to New York before a concert for a string of four or five 12-hour rehearsal days—but the music more than rewards the effort. "It's really tremendously complex music, but it's so rewarding to play," she says. "It's fun to get to that point where you're working on music and you know it well enough that you can take some risks."