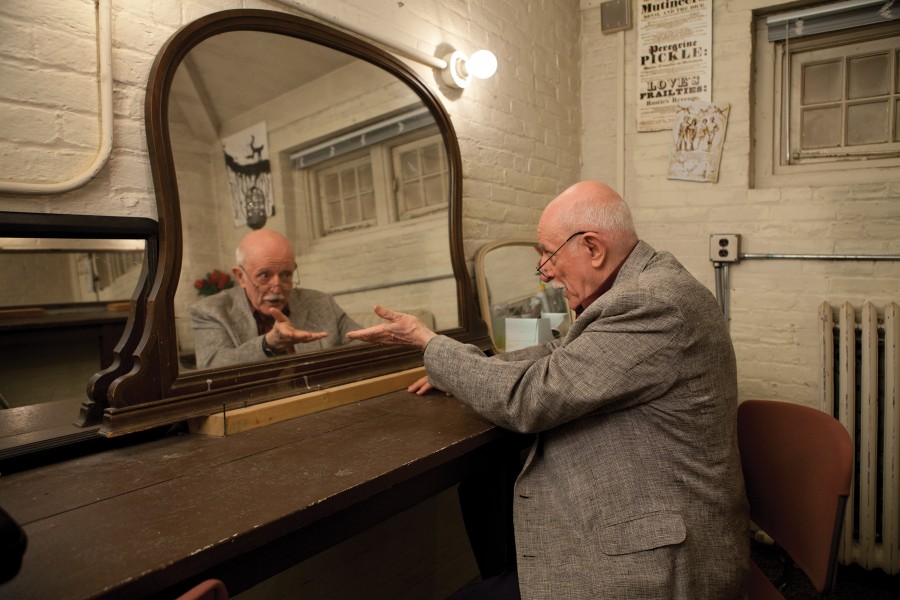 Just another day in the Land of Pleasant Living.

It was ambitious to schedule a double photo shoot—one of them outside—for mid-April. We had a terrific photographer named Christian Witkin coming down from New York for back-to-back sessions with theater professor John Astin, A&S '52 ("Staging a Revival"), and undergrad Liza Brecher, A&S '13 ("Parental Guidance"). The timing had to be nearly perfect, so I attended the shoot to make sure things went smoothly. We got started a little late when Astin turned out to be charming and loquacious and full of wonderful stories. And when we went outside to photograph Brecher, the day clouded over and a small sprinkling of rain was followed by a full-on hailstorm. Not exactly perfect, but it's springtime in Baltimore—what can you do?

My favorite part of the day was when, between shoots, Astin introduced himself to Brecher. She mentioned that her dad, Gerald Brecher, A&S '67, participated in theater when he was a student. Astin graduated too early for them to have crossed paths, but he thought for a minute and said, "Any relation to Irving Brecher?" Irving Brecher was a screenwriter who, among other things, wrote for the Marx brothers. Turns out he was a first cousin of her grandfather, Walter Brecher, A&S '34. Irving himself was not a Johns Hopkins graduate, but the moment still felt very Smalltimore.

It's just kind of nice that at a university that gathers people from all over the country and around the world, you can still have small-town moments like that.