In March, the Nitze School of Advanced International Studies announced that Vali R. Nasr had been selected as the eighth dean of the international affairs school in Washington, D.C. Most recently a senior fellow at the Brookings Institution and a professor at Tufts University in Boston, Nasr is a highly regarded scholar, foreign policy adviser, and commentator on international relations, especially in regard to the Middle East. From 2009 to 2011, he served as an adviser to the late Richard Holbrooke when Holbrooke was President Obama's special representative for Afghanistan and Pakistan. His most recent academic position has been associate director of the Fares Center for Eastern Mediterranean Studies at Tufts. 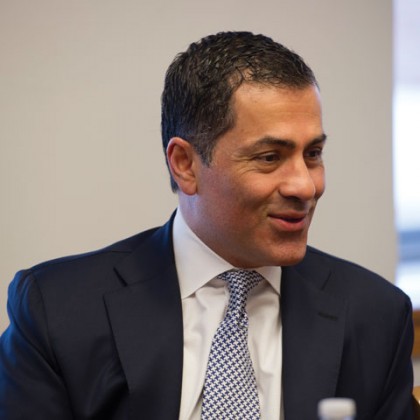 Born in Tehran, Iran, the 51-year-old Nasr received a doctorate in political science in 1991 from the Massachusetts Institute of Technology. A prolific writer, he is a columnist for Bloomberg View and has contributed to the New York Times, the Washington Post, Foreign Affairs, and Foreign Policy. He has also authored several books, including Forces of Fortune: The Rise of the New Muslim Middle Class and What It Will Mean for Our World (Free Press, 2009) .

Nasr succeeds Jessica P. Einhorn, who is retiring after a decade as dean. He will assume his new post on July 1. Announcing the appointment, university President Ron Daniels said, "I have been as impressed with Vali's warmth and humility as with his intellect, vision, and accomplishments. He has an excellent understanding of the challenges facing graduate schools of international studies, including SAIS, and an appreciation for the opportunities ahead."

In a statement released after the announcement of his appointment, Nasr said, "The nature and focus of education in international affairs are changing, as global challenges require innovative approaches, greater attention to technology, and addressing new demands in the job market. SAIS has a very important leadership role to play in shaping the future of education in international affairs."