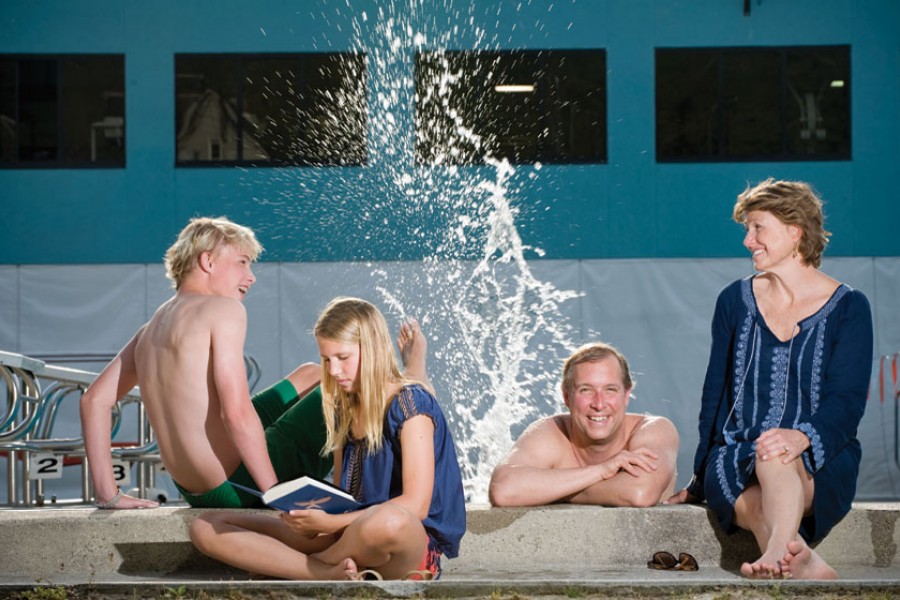 Image caption: Immediate funding to map a tumor like Jakes wasnt available, says Ted Smith. I wanted to speed up that process. Above: Jake (15), Kathleen (12), Ted, and Julie Smith enjoy a warm spring day at Meadowbrook Aquatic and Fitness Center.

During times of stress, Ted Smith, A&S '87, goes swimming. Smith was the assistant swim coach at Johns Hopkins for four years, and, before that, he coached swimmers at the University of Tennessee and Mercersburg Academy, among them four Olympic gold medalists. Although he never competed himself, he often swims for exercise at Meadowbrook Aquatic and Fitness Center in northern Baltimore. That's exactly what he was doing on May 14, 2010, when he got the devastating news that his wife, Julie, had stage 3 ovarian cancer.

Julie Smith had gone to Greater Baltimore Medical Center that morning for a preventive hysterectomy. She had a family history of breast cancer, and both she and her sister, Kathleen Drake, had tested positive for BRCA1, the genetic marker for hereditary breast and ovarian cancer. The sisters had both gone in for the two-and-a-half-hour procedure that day. After spending the morning pacing in the waiting room, Ted says, "I figured I'd go to Meadowbrook and swim, and I'd come back. No problem. I left the phone number of the pool, and I told [Meadowbrook] that my wife was in surgery. I'm pulling up my pants in the locker room, and the surgeon is on the phone. She has cancer."

The news hit the parents of two especially hard. Their eldest, Jake, had been diagnosed with a rare form of pancreatic cancer just six months earlier. Twelve-year-old Jake was the youngest person ever to have the disease. Because the vast majority of cases are diagnosed too late, pancreatic cancer is often deadly. Fortunately, Jake's doctors at Johns Hopkins caught the tumor early, and he immediately underwent surgery and had it successfully removed.

Following his son's recovery, as Smith watched his wife endure chemotherapy, he became immersed in some of the issues surrounding cancer research—genetic testing and tumor mapping, genetic flaws and drugs that respond to them. "I read about 800 pages on this stuff," says Smith. After hearing about gene studies going on at Johns Hopkins, he learned that some cancers can be traced to a gene mutation, and mapping the mutation could lead to a cure for other patients down the line. But, Smith says, "Jake's [form of cancer] is so rare, it was way down the list." Moved to help others with the disease, he asked how much it would cost to map Jake's tumor: $100,000. Smith decided to raise the money himself.

That's when he sat down with John Dierkes, A&S '77. They had met years ago through their work at investment bank Alex. Brown & Sons and had recently become reacquainted through Johns Hopkins alumni swimming events. Knowing that Dierkes had broad contacts in the cancer fundraising community, Smith hoped to identify potential donors and match them to his cause.

It was through Dierkes that Smith became involved in Swim Across America, a national organization donating to cancer research centers in major cities. Dierkes, a melanoma survivor and a former competitive swimmer (he was All-American captain of the Blue Jays and led them to their first NCAA championship in 1977), had been participating in Swim Across America events for several years. In 2010, Dierkes brought Swim Across America to Baltimore, reaching out to Baltimore native Michael Phelps, Meadowbrook (the facility where Phelps and several other Olympic swimmers have trained), and most of the Johns Hopkins swim team, who participated in the swim. That year, the Baltimore event raised over $465,000 for the Sidney Kimmel Comprehensive Cancer Center at Johns Hopkins, making it the most successful inaugural event in the organization's 25-year history.

In 2011, Swim Across America Baltimore raised more than $500,000. Smith raised $80,000 of that total. Within six weeks, the Swim Across America lab at Kimmel had mapped Jake's tumor. "Full disclosure," says Smith. "[Jake] did the swim. I did not." Originally planned as a one- or three-mile swim near Gibson Island on the Chesapeake Bay, the open-water swim had to be moved to Meadowbrook because of damage from Hurricane Irene. But so many people showed up to the pool, Smith says, he decided to sit out and give others a chance to participate. Jake, who is not a swimmer (he plays lacrosse), was a little daunted by the distance, but he completed the one-mile swim.

Jake, now 15, is already talking about getting a team together to participate in this year's swim, and Smith says they plan to be there as a family. Smith's wife and their daughter, Kathleen, would have been at last year's event to cheer Jake on, but they were raising money themselves at an ovarian cancer walk in Annapolis, Maryland, which fell on the same day. Even though Jake and Julie are both recovered from their illnesses, the Smiths are a family dedicated to finding a cure so that others can live. "I do have a fairly nice Rolodex of people to call," Smith says. "I am extraordinarily touched by what people would do."