Jerome Schnydman, A&S '67, and Stanley Fine, A&S '65, have a bro spot—two chairs planted in the sand on Bethany Beach, Delaware. Here these longtime friends watch the waves crash and talk for hours, until the sun goes down or their wives pry them away. 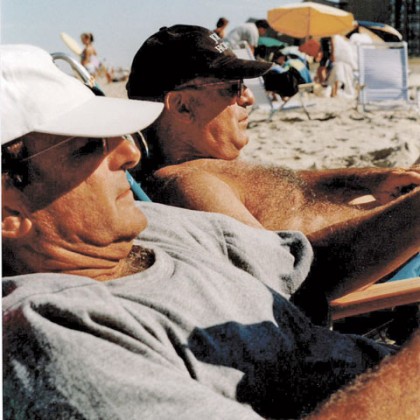 One favorite tale is the time the two played in the first game of Baltimore's box lacrosse league, televised live in 1962. Fine, six months older than Schnydman and then a freshman at Johns Hopkins, scored a game-high four goals in the winning effort for his club team. He couldn't wait to get a copy of the Baltimore Sun the next morning to relive his exploits. "The headline was 'Schnydman Steals the Show,'" says Fine, enthusiastically raising an octave. "The whole article was about Jerome winning face-offs and running around and through people. I got one mention at the end of the story. It said something like, 'and Schnydman surrendered scoring honors to Stan Fine,'" he says.

Fine gets to call Schnydman "Jerome," known as Jerry to most. He belongs to a core group who knew Schnydman before he started his distinguished career at Johns Hopkins, which officially ends on June 30, his retirement day. The two met at Baltimore City College and forged a bond on the lacrosse field. At Johns Hopkins, they pledged Phi Sigma Delta together and formed the backbone of a tenacious midfield for the lacrosse team. Following graduation, they stayed in Baltimore and kept in touch. Schnydman began an eight-year career in the insurance and pension business, returning to Johns Hopkins in 1975 to join the Office of Undergraduate Admissions. Fine went to law school. Today, Fine specializes in real estate development law at the local firm of Rosenberg, Martin, Greenberg LLP. Both say their bond only grew following graduation. "If I ever needed anything, I would call Stanley like you call a brother or a father," Schnydman says. "And I'm sure he would do the same thing for me."

The two say they rarely disagree and never argue. There are differences, however. "I got the big mouth," Schnydman says. "Stanley is more laid back. I'm wilder. Stanley is the smarter one. But we're both doers. We want it done five minutes ago."

In the early 1970s, the two organized a Homecoming reunion for their fraternity brothers, an annual tradition that continues to this day. They also co-championed many a project for Johns Hopkins, several ideas born on the beach in Delaware.

And then there's Blue Jays lacrosse. For years, they attended home games together, sitting in the row directly behind the band. That tradition ended when Schnydman assumed his post as secretary of the board of trustees and executive assistant to the president in 1998, and began entertaining visitors and guests in the president's box.

But all that will change next lacrosse season, after Schnydman retires. "Herb Better [A&S '65] and I are saving Jerome a spot in the stands," Fine says. And, as always, they'll both save each other's spot on the beach.