Leslie Norins, A&S '58, and his wife, Ann "Rainey" Norins, named Johns Hopkins University as a beneficiary of a $10 million bequest to fund an endowed student and faculty exchange program for the Krieger School of Arts and Sciences.

Raymond "Ray" Mabus Jr., A&S '71 (MA), secretary of the Navy, discussed his military and political careers as a guest on C-SPAN's Q&A in February.

Jerry Doctrow, A&S '72, a stock market analyst for Legg Mason and Stifel Nicholas for 15 years, retired in February. He plans to continue working part time as an adviser for Stifel Nicholas.

Edward Prochownik, A&S '72, director of oncology research at Children's Hospital of Pittsburgh and professor of molecular genetics and biochemistry at the University of Pittsburgh School of Medicine, was awarded a grant in January from the National Cancer Coalition to purchase equipment for his research.

Richard "Rick" Spinrad, A&S '75, is the vice president for research at Oregon State University after working for four different federal agencies and one lobby in Washington, D.C., for 23 years. 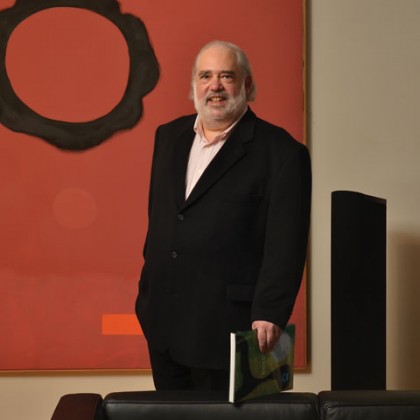 Image caption:The Sound Guy "A really good audio system suspends disbelief," says Sandy Gross, A&S '72. "When you're sitting in your living room and you put on John Coltrane or Jimi Hendrix, it's hard to believe that they aren't there performing for you." Gross discovered the power of a superior audio system while a student at Johns Hopkins in 1971, listening to two speakers the size of small refrigerators in his bedroom. A year later, eager to create similar high-quality sound at an affordable price, he joined fellow Johns Hopkins graduates Matt Polk, A&S '71, and George Klopfer, A&S '71, in founding Polk Audio (named after Polk because his was the easiest name to pronounce). Initially operating out of a Civil War-era home off York Road in Govans, the company became successful for designing speakers that delivered lifelike sound comparable to other brands that cost thousands more. Gross would eventually found two more speaker companies: Definitive Technology and, most recently, GoldenEar Technology, whose speakers have been praised by critics for their audiophile-oriented design. "Speaker design is what we've done all our lives," Gross said of GoldenEar's launch in 2010. "We love it." JENNIFER WALKER

Donald E. Buchanan, A&S '76, Med '80, HS '81, '83, a fellow of the American Academy of Pediatrics, was named medical director and senior physician of the state of Nevada's Early Intervention Services clinic in Las Vegas.

Jonathan Krant, A&S '76, SPH '83, is enjoying his second career as head of clinical research at Zalicus Inc., a biotechnology firm in Cambridge, Massachusetts, after spending 20 years in academic rheumatology.

Freda Lewis-Hall, A&S '76, chief medical officer of Pfizer Inc., was elected to the Save the Children Board of Trustees and will serve a one-year term.

Knut Danielsen, A&S '78, has been director of finance for a Manhattan-based pre-IPO company since 2009. He lives in Greenwich, Connecticut, and recently married an old friend from high school, the former Laura ter Kuerst.

James W. Wagner, Med '78 (MS), Engr '85 (PhD), president of Emory University in Atlanta, received President Obama's intent to reappoint him as the vice chair for the Presidential Commission for the Study of Bioethical Issues.

Marilyn Wyatt, A&S '78 (MA), '82 (PhD), wife of the U.S. ambassador to Pakistan, spoke at the third Karachi Literature Festival, which was held in Pakistan in February.

Judy L. Smith, Engr '79, '85 (MS), vice president of business development for ITT Exelis' information systems division, was appointed to the board of directors of Women in Aerospace. The two-year appointment took effect in January.

Deborah Wetzel, SAIS Bol '85 (Dipl), SAIS '86, who has more than 25 years of experience in development work around the world, was named World Bank director for Brazil, effective April 2.

Amjad Ghori, SAIS '86, is the co-founder of the Aziza Ghori Charitable Foundation, which provides educational opportunities and safe homes for underprivileged children around the world. Aziza's Place, a home and learning center for impoverished Cambodian children, is one of the most active projects of the foundation.

Corinne Sandone, Med '86 (MA), an associate professor in the Department of Art as Applied to Medicine at the Johns Hopkins School of Medicine, was one of the judges for the 2011 International Science and Engineering Visualization Challenge. The challenge, which turns scientific exploration into art, was presented by Science magazine and the National Science Foundation.

Jerilyn Allen, SPH '88 (ScD), will be one of 14 nurse researchers inducted into the 2012 International Nurse Researcher Hall of Fame later this year. The Hall of Fame recognizes Sigma Theta Tau International members whose research has impacted the nursing profession and patients, and who have received significant national or international recognition for their work. The award presentation will take place in Australia this August.

Beatrice McKenzie, SAIS '88, is a tenured professor in the Department of History at Beloit College in Wisconsin.

Richard Norland, SAIS '92 (MIPP), the international affairs adviser and deputy commandant at the National War College, received President Obama's intent to appoint him as the U.S. ambassador to Georgia in February. 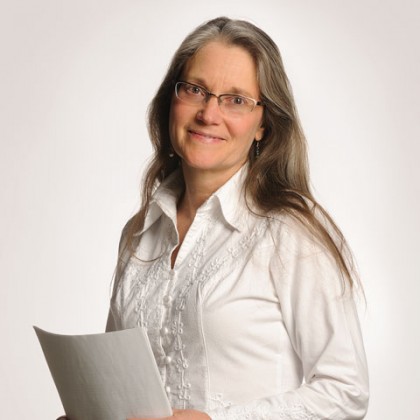 Image caption:An Arresting Environmentalist Cindy L. Parker, SPH '00, has a level of expertise that would ordinarily be welcome at the White House. When the assistant professor of environmental health sciences at the Bloomberg School of Public Health went there last August, however, she ended up in jail. Parker and fellow activists conducted a sit-in in front of 1600 Pennsylvania Avenue as part of an effort to persuade the Obama administration to block the proposed Keystone XL oil pipeline from the tar sands of Alberta, Canada, to refineries near the Gulf of Mexico. National Park Service police quickly arrested them, but the protesters' concerns—about threats from the pipeline to aquifers and environmentally sensitive areas in the Great Plains, and the imperative to find other ways to meet the world's energy needs—received a wide airing. In January, President Obama rejected TransCanada's initial construction proposal for the pipeline, citing the need for a thorough environmental review of the project. JAMES HUNT

Erdem Basci, A&S '93 (MA), is the governor of the Central Bank of the Republic of Turkey.

Brian Ganz, Peab '93 (AD), completed the second performance of his decade-long quest to perform all of Chopin's approximately 250 piano pieces in front of a live audience. The performance was held on February 11 at the Music Center at Strathmore in North Bethesda, Maryland.

Nancy Kete, Engr '93 (PhD), the newly appointed managing director of The Rockefeller Foundation, will concentrate on the foundation's global work on resilience.

David Tuveson, Med '94 (MD/PhD), was appointed director of research for The Lustgarten Foundation, a private foundation that focuses on pancreatic cancer research, on February 7.

Ron Capps, A&S '95 (MLA), who spent 25 years in the armed forces, is founder of and an instructor with the Veterans Writing Project, a nonprofit organization that helps people involved with the military tell their stories in order to promote healing.

Anita Tarar, A&S '95, was promoted to partner at the Dallas office of Fulbright & Jaworski LLP in January.

Paul Wyse, Peab '95 (MM), a concert pianist, had two of his portrait paintings acquired by the Smithsonian's National Gallery in Washington, D.C., in 2011. One of Wyse's paintings, a portrait of Billy Joel, was unveiled at Steinway Hall in New York last December.

Marie Nolan, Ed '97 (MSEd), will be one of 14 nurse researchers inducted into the 2012 International Nurse Researcher Hall of Fame later this year. The Hall of Fame recognizes Sigma Theta Tau International members whose research has impacted the nursing profession and patients, and who have received significant national or international recognition for their work. The award presentation will take place in Australia this August.

Joshua M. Friedman, A&S '98, formerly with NPR and the Johns Hopkins Berman Institute of Bioethics, joined the ASU Foundation for a New American University as vice president for strategic philanthropy on February 1.

Kyle Pickett, Peab '98 (DMA), is conductor and music director for the Juneau Symphony. The symphony, which is the largest in southeast Alaska, has grown significantly since Pickett assumed his position in 2000.

Kevin Callahan, Engr '99, and his wife, Maggie, live in Austin, Texas, and welcomed their first child last year. Callahan is co-founder of MapMyFitness, which operates a suite of social wellness-oriented websites and associated mobile applications. Additionally, Callahan was recently elected to the board of directors of Running USA.

Lavonzell Nicholson, Bus '03 (Cert), is the founder of PlayNOLA, which organizes sports leagues and networking events for young professionals in New Orleans.

Susan M. Anderson, A&S '04 (MLA), who has enjoyed a long career in orchestra management, was recently named director of operations and artistic administration for the Santa Barbara Symphony.

Bharati Chaturvedi, SAIS '07 (MIPP), founder of Chintan, an Indian environmental research and action group, accepted the first ever Secretary's Innovation Award for Women's and Girls' Empowerment from U.S. Secretary of State Hillary Clinton in March. There were two additional winners of this award.

Corinne Winters, Peab '07 (MM), a soprano from Frederick, Maryland, was one of six winners of the prestigious 41st George London Foundation Voice Competition. 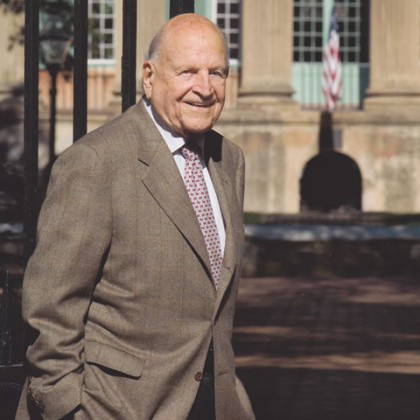 Image caption:Leading the Southern Way As he approaches his 100th birthday, Theodore "Ted" Stern, A&S '34, continues to serve and inspire his adopted hometown of Charleston, South Carolina. A native New Yorker born on Christmas Day 1912, he landed in the city in 1965 after being named commanding officer of the Charleston Naval Supply Center. Upon retiring three years later, Stern was asked to take on the presidency of the College of Charleston, then struggling to survive with fewer than 500 students. He led the integration and modernization of the school; its enrollment grew to more than 5,000 students by the time he stepped down in 1978. By then, he had also lent his considerable energy to the effort to launch the noted arts festival Spoleto USA. Called "the most profound leader of his era" by 10-term mayor Joseph P. Riley Jr., Stern continues to keep daily office hours at the college, offering insight to all comers. JAMES HUNT

Meghan K. Davis, Peab '08, will represent Philadelphia in the "Mary from Dungloe" annual musical contest to be held in Ireland this summer.

Benjamin Peck, Peab '08, '09, a bassoonist, was the National Symphony Orchestra and Washington National Opera development intern from January to May.

Gordon Mack, Engr '10, a video editor, is one of nine winners of the MLB Fan Cave contest. The winners are paid to dwell in the "Fan Cave" on the corner of Fourth and Broadway in Manhattan where they watch all regular season Major League Baseball games and chronicle their experiences through social media.

Lynn Molnar, Bus '10, founded Thankful Paws, an organization that helps people in financial need keep and feed their pets. They have partnered with Meals on Wheels to distribute pet food in Baltimore and surrounding areas. Visit their website at thankfulpaws.org.

Gabriel "Gabe" Plumer, A&S '10, only 23, is the newly appointed mayor of Alexandria Township, New Jersey, and one of the state's youngest municipal leaders.

So Much Talent, So Little Space

Johns Hopkins alumni have a way with words. And the talent to turn those words into books—lots of them. We don't have room in four magazine issues a year to feature them all, which is why we're now putting all alumni book publication news online in our new Alumni Authors Bookshelf.

See titles or find out how to submit your own book to the series at alumni.jhu.edu/bookshelf.