It's an imperial city that never lost its grandeur. A city of parks and woods that was "green" long before anyone used the term, Vienna is home to the Austria chapter of the Johns Hopkins Alumni Association. It was Vienna's own Sigmund Freud who once observed that "civilization began the first time an angry person cast a word instead of a rock." As residents of what may be the world's most civilized city, the Viennese have plenty of words to cast by way of welcome to the 5 million or so tourists who visit each year. Here are a few that intrepid Blue Jay travelers may find especially helpful should they find themselves footloose in the waltz capital of the world. 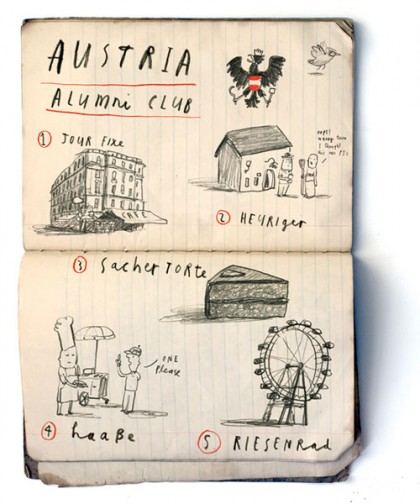 1. jour fixe Meaning "fixed day," these lively discussions are held the last Wednesday of every month at Caf&eacute; Landtmann, located on Ringstrasse, the boulevard that encircles the center of town. Guided by longtime Austria chapter leader Karl Krammer, SAIS Bol '79 (Cert), '80 (MA), these meetings have hosted a stellar lineup of guest speakers including journalists, high-ranking civil servants, and academics.

2. heuriger One of these city wine taverns, such as Heuriger Werner Welser in the wine-growing hills, hosts an informal chapter get-together each summer. Vienna is the world's only big city with a significant wine industry, with over 700 hectares (1,730 acres) of vineyards under cultivation, most of it on the city's hilly northern and western edges.

3. Sachertorte This rich Viennese dessert concocted of chocolate sponge cake, apricot jam, and dark chocolate frosting can be found at the Hotel Sacher, which holds claim to the original 19th-century recipe.

4. haa&szlig;e Derived from the word hei&szlig; (meaning "hot"), this Viennese expression refers to the hot sausages served at small sidewalk kiosks. As these places are open until 4 a.m., you can enjoy a Burenwurst or a K&auml;sekrainer with mustard, a slice of dark bread, and a beer at almost any time—day or night.

5. Riesenrad The city's famous 212-foot Ferris wheel is in the Prater amusement park, which was a focal point of the classic Orson Welles film The Third Man.