Sunshine with a twist 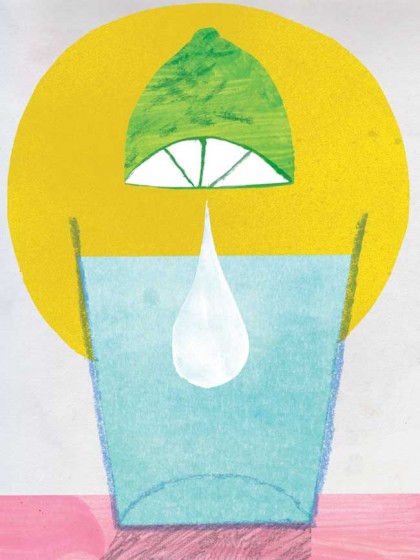 In 2009, Harding was in a School of Medicine class taught by professor of biophysics Jon Lorsch when Lorsch mentioned that lime juice splashed on the hands can result in patches of sunburn. This is because sunlight activates biomolecules in the lime juice called psoralens, which damage skin cells. Harding knew that one method of household water treatment recommended by UNICEF is solar disinfection— putting water into a 1- or 2-liter plastic bottle and leaving it in the sun for at least six hours. Harding's mind connected these pieces of knowledge: "The first thing I thought about was using lime juice to disinfect water by turning the psoralens against microbes." To test the idea, he filled plastic bottles with tap water, contaminated each water sample with one of three harmful bacteria (including Escherichia coli), then added juice squeezed from Persian limes, the variety most often found in grocery stores. The last step was to expose the bottles to sunlight—not only in a lab but on the deck of the Denton A. Cooley Center swimming pool.

Harding collaborated with Kellogg J. Schwab, director of the Johns Hopkins University Global Water Program in the Bloomberg School of Public Health, on a study recently published in the American Journal of Tropical Medicine and Hygiene. They used 30 milliliters of lime juice per 2 liters of water, roughly equivalent to 1 ounce of juice per half-gallon of water. The water samples contained E. coli, MS2 bacteriophage (a surrogate virus commonly used in research because it is similar to some common pathogenic viruses), or murine norovirus (another surrogate, this time for human norovirus, a highly contagious cause of gastroenteritis that cannot be cultured in the lab). The combination of lime juice and exposure to UVA for 30 to 150 minutes led to about a million-fold reduction of E. coli. The study also found significant reduction in the MS2 bacteriophage tests. The technique did little to reduce norovirus, which had already proved resistant to simple sun exposure.

Most of sub-Saharan Africa and much of Latin America and Southeast Asia experience sufficient sunlight for lime juice-enhanced solar disinfection. Fortunately, many of those regions also produce limes and lemons (which, the researchers say, should be investigated as a substitute in places where limes are harder to obtain). Plus, limes are cheap, and lime juice seems to boost the effect of solar disinfection enough to lessen the need for long sun exposure. And there's one more favorable factor: Many cultures already use citrus juice in food preparation for its disinfective properties. They are accustomed to the flavor.

On a cloudy day, solar disinfection (frequently called SODIS in public health literature) can take up to 48 hours to work, one reason it is not more widely used. Harding's method could greatly speed up the process, plus it involves almost no technology. "All you need is a plastic bottle, which you can get almost anywhere on earth, and sunlight, which is readily available in places where clean drinking water is not available," Harding says. "If we can find a way to speed up SODIS so it can be done in the morning and then you can use the water to cook lunch that afternoon, it will have a lot more popularity."