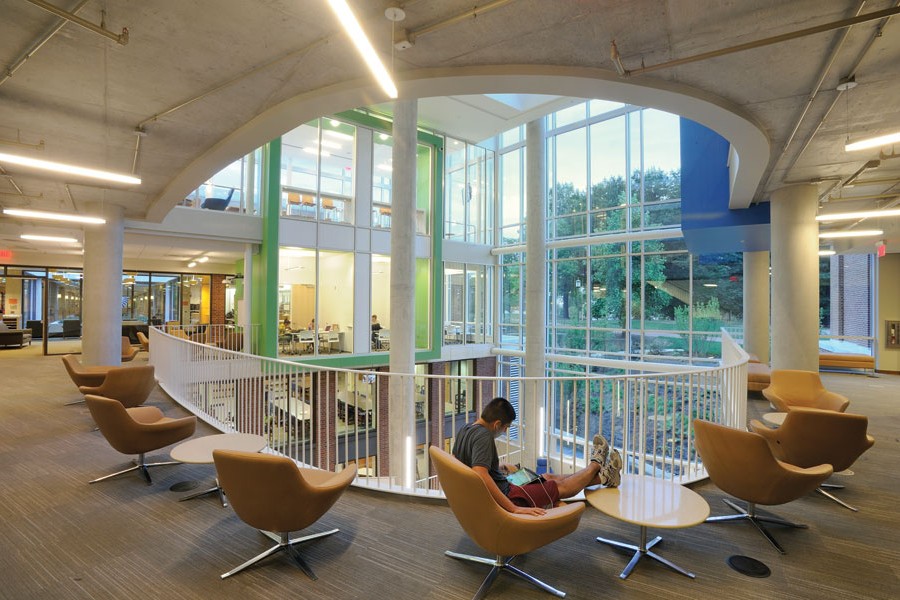 Studious undergraduates, and what other kind are there at Johns Hopkins, found 500 new places to read, write, and peck at a laptop when they returned to campus this month. In mid-August, the Brody Learning Commons opened for business—quiet academic business—on the Homewood campus. The $30 million addition to the Milton S. Eisenhower Library adds four floors and 42,000 square feet of badly needed space for solitary or group study, with a good measure of high technology, an extraordinary amount of natural light, and a caf&eacute; to dispense the caffeine that fuels Hopkins kids.

The new facility, named after former Johns Hopkins President William Brody and his wife, Wendy, meets a demand for study space that up to now has far outstripped supply. Despite Internet access that brought a universe of research material to any dorm room on campus, the MSEL and Gilman Hall's Albert D. Hutzler Reading Room were routinely packed with students, especially later in the semester as exams approached. When the Charles Commons residence hall opened in 2006, campus librarians noticed even more demand as students streamed across the street and up the Beach to study in the library. They also noticed a change in study habits. "Social activity is part of the library now in ways it wasn't 15 years ago," says Brian J. Shields, communications and marketing manager for the Sheridan Libraries. Students needed space for collaborative group study, and there simply wasn't any in the existing library.

The official groundbreaking for the Brody Learning Commons, just south of the MSEL building, took place in June 2010. When Shields gave an informal tour last month, work crews were installing the last cosmetic touches, and librarians were in a seminar room learning about the new facility. Store tags still dangled from chairs, and taped-up signs stood in for the formal signage that will designate the various rooms and spaces.

It would be accurate to describe the new building as a clean, well-lighted place. It also would be accurate to describe it as flat-out gorgeous on a bright morning. Sunlight pours through expansive windows and skylights. In the open common spaces, chairs and small tables can be moved around to suit students' needs. There are 15 group study rooms, several classrooms wired to the max for digital technology, and a large quiet reading room that houses an installation by artist and curator Mark Dion that he has called "an archaeology of the material culture of knowledge." It gathers in display cabinets and drawers more than 500 objects from every corner of Johns Hopkins, including old microscopes, manual typewriters, lab equipment, medical models, skulls, even antique wooden lacrosse sticks. Besides increasing study space by a third, the library addition will house the Department of Special Collections and a new conservation laboratory for the Department of Conservation and Preservation. There are numerous interesting details. In study rooms, the walls have been painted with special paint that will allow students to write on them as whiteboards. Student lockers are equipped with outlets for charging cellphones. Marble used in construction of the new building was salvaged from the earlier renovation of Shriver Hall.

It's enough to make you want to be an undergraduate again. Almost.