A brilliant, endearing presence on the Homewood campus for more than 60 years, Richard Macksey, A&S '53, '53 (MA), '57 (PhD), approaches knowledge the way a foodie looks at nature: There's potentially something tasty everywhere, and seemingly disparate things can complement each other. In 2005, Macksey wrote the preface to the second edition of The Johns Hopkins Guide to Literary Theory and Criticism, a more than 1,000-page reference doorstop first published by Johns Hopkins University Press in 1994. He begins this historical overview of literary criticism with a brief tale of 18th-century British historian Edward Gibbon, "fresh from his Calvinist cure in Lausanne." Conversations with Macksey refreshingly wander as memories and ideas open narrative trapdoors, fitting for a man who chose Proust for his dissertation. These digressions can venture into intellectual life's lesser-known nooks, such as indelible eccentrics who were unable to fit into the academy's square pegs. 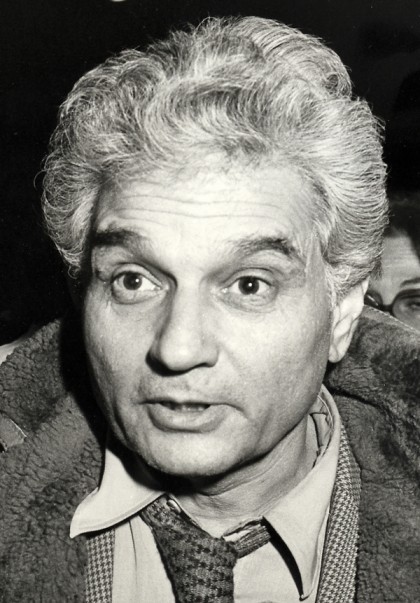 "We had Charles Sanders Peirce, who was the most brilliant of all eccentrics and one of the most difficult," Macksey says. Peirce was an intellectual Swiss Army knife. Mathematics, logic, philosophy, science, semiotics—whatever the discipline, he could slice through it with his nimble, creative mind. His Johns Hopkins career was far too brief, 1879 to 1884, but the shadow he cast was long enough for Macksey to invoke Peirce's chutzpah for "adapting the methods of one science to the investigation of another" during the opening remarks to The Languages of Criticism and the Sciences of Man symposium held at the Milton S. Eisenhower Library from October 18 to 21, 1966. It assembled a cadre of French intellectuals whose multifaceted investigations of the social sciences had made structuralism, the very loose umbrella for a wide array of thought, existentialism's successor. By the end of the conference, though, a Peirce sentence from his 1891 Architecture of Theories provided a more fitting epitaph: "May some future student go over this ground again, and have the leisure to give his results to the world."

The conference helped position Johns Hopkins as a gateway for contemporary French thought into North America, and the event itself was populated with flamboyant personalities: interlocutors fortified by a few too many French 75s prior to question-and-answer sessions; a native French speaker mispronouncing "meet" as "mate," which made his desire to meet with the students sound a tad odd; and a last-minute presenter who, Macksey admits, "was an intellectual terrorist. He had better manners than many French academics, but there was an element of disruption, obviously."

Given that the 18-minute TED talk is the current de facto forum for sharing big ideas, it might be difficult to understand how a university-sponsored gathering of more than 100 thinkers from around the country and eight other nations could cause the seismic ripples that it did. With a Ford Foundation grant and the support of the Humanities Center's founding director, Charles Singleton, a trio of young Johns Hopkins faculty members wanted to bring to the university as many leading structuralists as possible. Guests would present their papers, to be followed by question-and-answer time in which invited interlocutors could respond with an intervention—an extemporaneous mini-lecture reply that might lead into a question.

It was organized by Ren&eacute; Girard, then chairman of Johns Hopkins' Romance Languages Department and now a Stanford University professor emeritus; Eugenio Donato, A&S '65 (PhD), a former graduate student who taught at Johns Hopkins for a few years before moving on to the University at Buffalo and the University of California, Irvine; and Macksey. The speakers included Roland Barthes, Lucien Goldmann, Jean Hyppolite, Jacques Lacan, Charles Moraz&eacute;; former Johns Hopkins faculty Georges Poulet, Guy Rosolato, Nicolas Ruwet, Tzvetan Todorov, Jean-Pierre Vernant; and Johns Hopkins faculty Neville Dyson- Hudson, Donato, Girard, and Macksey. The event was standing room only— "people were falling out of the windows," Macksey jokes—and a closed-circuit broadcast was eventually set up in the MSEL's staff lounge.

Belgian anthropologist Luc de Heusch was invited to attend but couldn't, and the organizers needed to find a replacement at short notice. Invitee Hyppolite suggested a 36-year-old former student. His name was Jacques Derrida. "I'm not sure how clear we were about where this guy was going," Macksey says. "Hyppolite just said, 'I think he would be somebody who would come.' So we got in touch with him, and Jacques, on fairly short notice, said yes, he would come. I hadn't realized that he was going to be the Samson to tear down the temple of structuralism."

With "Structure, Sign, and Play in the Discourse of the Human Sciences," Derrida impishly but effectively identified flaws in the organizational thrust of Claude L&eacute;vi-Strauss' work in kinship and mythologies, work that formed a critical base for structuralist theory. It struck at the heart of the work of some of the assembled guests, and Derrida's responses to interventions were deft deflections. For example, his former teacher Hyppolite introduced algebraic examples to discuss Derrida's arguments, and then asked him if that was what he was going for. Derrida responded, "I was wondering myself where I am going. So I would answer you by saying, first, that I am trying, precisely, to put myself at a point so that I do not know any longer where I am going."

Derrida spoke on the conference's last night, but he would return to campus—and the American lecture circuit—over the ensuing years, as Johns Hopkins in the late 1960s and early 1970s became an incubator of poststructuralist thought and thinkers. The conference was a pivotal point in Derrida's career. In its obituary following Derrida's 2004 death at the age of 74, the New York Times noted that his Johns Hopkins appearance "shocked his American audience." "Did we know what had happened?" Macksey asks. "No, but there was a sense."

J. Hillis Miller, a University of California, Irvine, professor emeritus of English, was a member of Johns Hopkins' English Department at the time and missed Derrida's lecture because he had to teach a class. But he caught up with his friend and former colleague Poulet immediately afterward. "And he said, 'I have just heard the most important lecture of the conference—it's against everything that I do but it was the most important lecture,'" Miller recalls. "It was quite an extraordinary piece of prophetic insight. . . . I don't think the historical importance of that conference has been exaggerated."

Macksey has revisited this conference a number of times, including penning a new preface for the 2005 reissue of the book that collected the presented papers, The Structuralist Controversy. In it he quotes from a Derrida presentation at an American university some two decades after the symposium, in which Derrida acknowledges, "What is now called 'theory' in this country may have an essential link with what is said to have happened there in 1966."

The ghosts of ideas and people move in and out of time and mind, liable to appear in quotidian moments. Shortly after first sitting down to begin this conversation, Macksey asked his guest for a match. A shuffling through the stacks of papers and books that cover the table in his library soon followed. His guest found a match?book and held it up. "No, they're empty," Macksey says, before noticing the script logo of a Swiss tobacco manufacturer on the cover. "They're Davidoff. I haven't had Davidoff since Jacques Derrida was here."