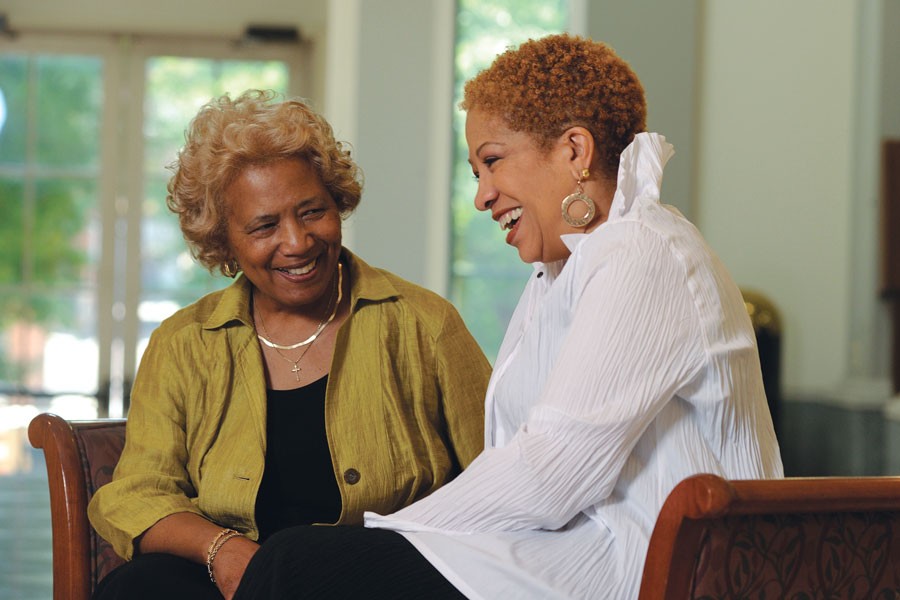 Image caption: Mellasenah Morris (left) and Janet Jordan met at Peabody in 1964 and have been close friends ever since.

The year was 1964. Morris and her soon-to-be roommate, Janet Jordan, Peab '68, were among the first African-American students to attend the school. Now, 48 years later, Morris is dean of Peabody Conservatory of Music and deputy director of the Peabody Institute. Jordan has enjoyed an international performing career, and the two are still close friends.

As students, Morris studied piano performance while Jordan pursued a degree in music education. The two didn't attend many classes together, but they became roommates during their second semester, says Jordan, and "that's when we really bonded." Their Park Avenue boarding house held 30 music and art students (all women), a grand piano in the parlor (where Jordan would sing and Morris would accompany her), and a creepy basement (where Morris refused to do her laundry without the company of a friend).

"I turned 16 years old when I arrived at Peabody," recalls Jordan, who now lives in New York. "We were young, and we were in a new city. We went through this adventure together, and Mellasenah was a safe haven for me."

Throughout college, weddings, pregnancies, and career moves, the friendship endured. After Peabody, Jordan's career "took a zigzag road," she says, first to the Manhattan School of Music for a master's degree, then a short stint working as an assistant librarian in the Music Division of the New York Public Library. Soon enough, Jordan got her first break and joined the European tour of Porgy and Bess.

"It was always fun to get postcards from Janet from Japan or Scandinavia. Janet was always having a fabulous tour somewhere," recalls Morris. Jordan's singing career took her across America, Europe, and Asia, to Broadway and Carnegie Hall and beyond. "It was so wonderful to see her with Yul Brynner in The King and I. We had tickets to the National Theatre and saw that performance in D.C.," says Morris. "That was fabulous!"

Meanwhile, Morris' career took an academic track—from her position as assistant dean for academic affairs at Peabody to professorships and deanships at Alabama State University, James Madison University, Ohio State University, and back to Peabody again —continuing her performing career all the while.

"Even with all of her academic achievement and all of her success, she remains the same sweet person," says Jordan. "Because we shared so much over the years, I see myself reflected back when I look at her. Mellasenah is one of those special people you meet in life—if you're lucky."

Each summer, the two have a Baltimore reunion. "We shop. We dine. We sit and talk and go through old memories," says Morris. "She's like the sister I didn't have."