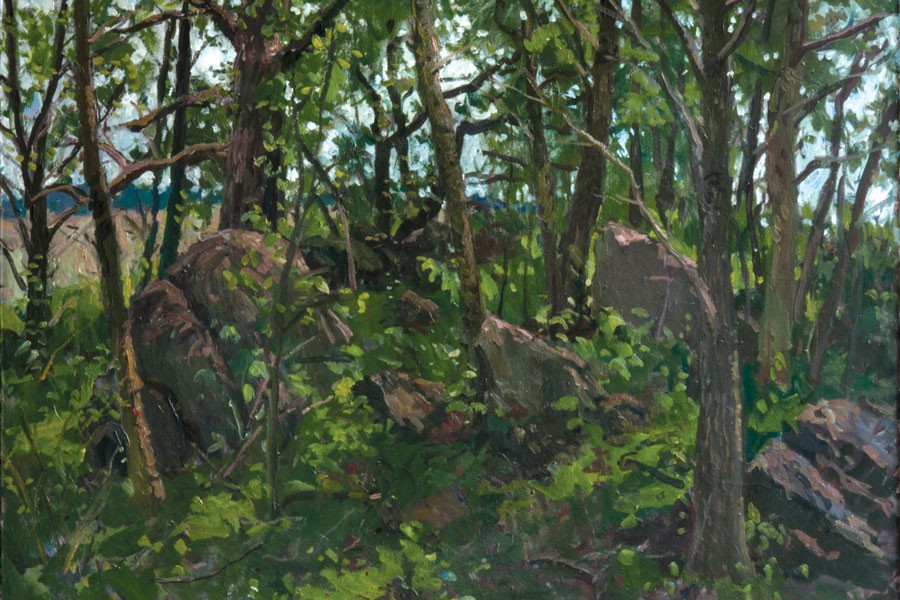 Image caption: Eugene Leake's May Rocks and Trees "had been savaged."

Michael Sullivan knew what he had right away. He was standing with a group of contractors in a corridor of the AMR I freshman residence hall on the Homewood campus last May, at the beginning of a major renovation of the dorm, when he spotted an oil painting leaning against the wall. A demolition crew working on the dorm had found it in a janitor's closet and moved it to the hallway. The painting was a mess, but Sullivan, director of finance and administration for Homewood Student Affairs, recognized it immediately as a landscape by the late Eugene Leake, former president of the Maryland Institute College of Art and founder of the Homewood Art Workshops.

Sullivan called Craig Hankin, current director of the Art Workshops and the author of Maryland Landscapes of Eugene Leake. Says Hankin of the painting, May Rocks and Trees, from 1984, "It had been savaged, basically. The canvas had been torn in a couple of places. Someone had driven nails through the backs of the stretchers"—the framework on which the canvas had been stretched taut—"and the nails had punctured the canvas as well. Solvents and things had been spilled on it and it was really badly stained. I was a combination of horror-stricken and grief-stricken."

The university turned the painting over to Mary Sebera, a conservator at the Baltimore Museum of Art. Sebera noted that despite the damage, overall the painting was stable. She removed the nails, patched the holes, cleaned the surface of the painting, and resecured it to the stretcher. When he first saw Sebera's restoration, Hankin says, "My jaw dropped. To look at it today, you would never imagine that the painting had been so badly abused. It's absolutely stunning."

The painting now hangs in the Ross Jones Building of the Mattin Center.