In macroeconomics, when a crisis hits people flee to where they feel safest. So when the economy in the United States collapsed in 2008, many investors traded stocks for bonds, eventually parking their assets in the safest spot: U.S. Treasury bonds. Supported by the large and diversified U.S. economy, Treasurys are the closest thing to a risk-free investment—you won't make a lot of money, but you won't lose your shirt either. 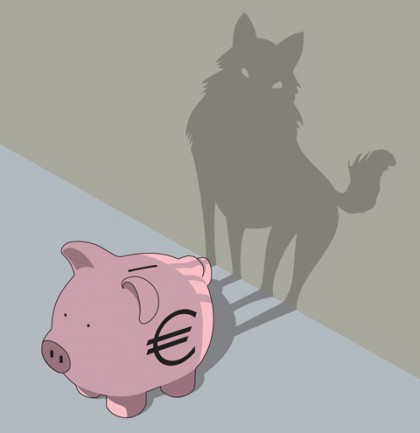 In Europe, investors tried to do the same thing—only there was a glitch. Because each European country issues its own treasury bonds, investors not only fled to safety across asset classes (stocks to bonds to treasury bonds), but also across national borders, dumping bonds from the perceived riskier countries in southern Europe such as Greece, Portugal, and Spain, and buying up everything they could from the northern countries of Germany, France, and the Netherlands. That created problems on both sides of the borders, says Erik Jones, director of European Studies at the Nitze School of Advanced International Studies and director of the Bologna Institute for Policy Research in Italy. Because there are not nearly enough government bonds in the "safe" countries of Europe, investors have flooded the market, creating the perverse situation where countries like Germany are charging negative interest rates.

"People are essentially paying Germany to keep their money safe," says Jones. "That's not sustainable for the long haul." Meanwhile, in poorer countries, banks are seeing the value of their government holdings plummet, forcing national governments to bail them out, creating a "doom loop" between bank balance sheets and government finances that further destabilizes the peripheral economies. Voil&agrave;, the eurozone crisis we know today.

This doom loop has already pushed Greece, Ireland, and Portugal out of the market and is threatening Spain and Italy as well, says Jones. "It's really a disastrous situation, and the only way we can solve it is to stop people from being afraid, or to give them a new reflex to channel their fear in a more constructive way."

The new way Jones and others have proposed to fix the problem is to create a risk-free investment of last resort similar to U.S. Treasurys. These eurobonds could be issued by every country that has adopted the euro as its currency—the so-called eurozone—but would come out of one centralized authority and carry a single credit rating, thereby stopping the geographic flight of money across borders and breaking the doom loop. Jones has become one of the chief proponents of eurobonds, holding workshops and seminars on the topic at SAIS and proselytizing for their adoption in speeches at conferences across the continent and in a prolific article-writing campaign in European newspapers and financial blogs.

He has run into stiff resistance from some in northern Europe who argue that setting up a common bond instrument would put richer countries on the hook for poorer countries' debts, giving the poorer nations incentive to borrow more and further exacerbate the crisis. In fact, says Jones, the system as it's been proposed would do the opposite. Each country would be given a limit on how many eurobonds it could issue, perhaps 60 percent of GDP. As a hypothetical example: Germany might be allowed to borrow up to $2 trillion through participation in a new eurobond issue, but Greece, with its lagging economy, would be restricted to a maximum of $180 billion. For Greece to borrow more than that, it would need to issue national bonds rather than eurobonds, and the interest rates demanded in the markets for national bonds would be much higher. Thus, eurobonds would create an incentive for countries to borrow less money, not more. In addition, to qualify for borrowing through eurobonds, countries would need to open up their books and meet certain financial requirements, making their economies more transparent and accountable.

Only by confronting fear can the eurozone get out of its crisis, Jones says. "Every economy needs a risk-free asset where people can put their money when they are afraid. The alternative is to wish away fear, and you show me the politician who can do that."