At the dedication of the new Johns Hopkins Charlotte R. Bloomberg Children's Center, philanthropist and New York City Mayor Michael Bloomberg, Engr '64, made this observation: "I don't often give speeches in front of a pair of colorful rhinos," he joked of the 20-foot-high sculptures hovering over his left shoulder, "but that's my point. It's these signature defining touches . . . [that] have all contributed to a unique and uplifting environment of support and healing." 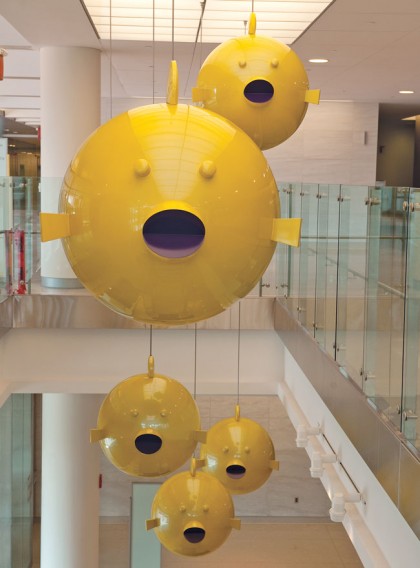 Creating a nurturing environment through the use of art, architecture, and design is central to Bloomberg's ongoing philanthropic capital construction commitments, including the Children's Center, which was named in honor of his late mother and supported through Bloomberg's $120 million gift.

"We think about the importance of art being part of the gift so it's not just stone and mortar, but the creation of a cultural soul that's part of the building," says Nancy Rosen, who has worked as a curator and creative consultant on numerous Bloomberg projects. The results of their collaborations can be seen around New York City (Rosen formerly served as Bloomberg's representative on the city's Public Design Commission and helped choose the World Trade Center memorial design) and on Johns Hopkins' Homewood campus in the Gilman Hall renovation.

Bloomberg wanted the art within the Charlotte R. Bloomberg Children's Center and the adjoining Sheikh Zayed Tower to be both beautiful and purposeful. At the Children's Center, that meant creating a welcoming first impression for families and youngsters, from the moment they glimpse the 1.6 million-square-foot building until they make their way to a private room. The gently curved outer glass facade, awash in soothing colors inspired by Monet's water lily paintings; the elevated walkways from the garages illuminated in gently changing light patterns caused by etched glass walls; the numerous hanging animal sculptures inside the expansive, atriumlike main floors—each design aims to create a soothing environment for the hospital's young patients.

Beyond creating an environment that encouraged immediate healing, Bloomberg wanted to use art to promote long-term health in engaging, kid-friendly ways. "There's a lot of data—and the mayor is very data driven—proving the correlations between reading, literacy, and being a healthier adult," says Rosen. "So, celebrating reading and being read to fitted into the whole idea of, How do we do something that's more than just decoratively pleasing but that also has some meat on it and offers deeper layers to explore?" To that end, Rosen engaged dozens of artists to base works on classic children's books, including Hans Christian Andersen's Little Mermaid, Beatrix Potter's Peter Rabbit, and Dr. Seuss' 500 Hats of Bartholomew Cubbins. What emerged was a potpourri of kaleidoscopic linocuts, silkscreens, acrylics, and dozens of other works that are homages to the wonders of children's literature. These works pop out at different places all over the hospital, such as the recessed glass enclosures that are a bit like literary fish tanks, sunk into the walls near the elevators on each floor. There, at kids' eye level, are the come-to-life stuffed puppets of artist Jennifer Strunge, including smiling sunflowers whose petals cradle a beautifully illustrated book.

In all, the talents of some 70 artists grace the new Children's Center, and their work is already sparking conversations about how art can be used in other therapeutic forms. Johns Hopkins Child Life Director Patrice Brylske, who worked with Rosen on how children could best interact with the art, says she's now received grants to bring dancers, poets, and actors to her young patients, creating new and stimulating ways for children to play and grow while they're in the hospital.

With justifiable pride, Mayor Bloomberg in his dedication speech noted that, "inside and out, the new Johns Hopkins Hospital building is a place that's intended to comfort and inspire through the innovative use of art and design." The mayor also articulated his hope that the facility serve as a blueprint for other hospitals interested in adopting a similar approach.