James West is the co-inventor of the electret microphone used in telephones, sound recording devices, hearing aids, and other products. A research professor of electrical and computer engineering and of mechanical engineering in Johns Hopkins' Whiting School of Engineering, he is a recipient of the U.S. National Medal of Technology and Innovation and of the Benjamin Franklin Medical Award in Electrical Engineering, and is a member of the National Inventors Hall of Fame. 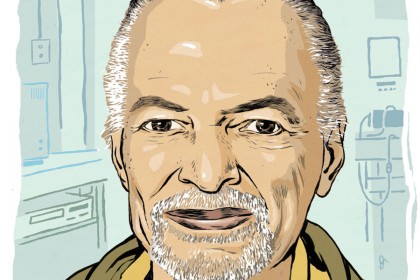 When I grew up many years ago in the small town of Farmville, Virginia, the only professions that were available to black people were lawyer, preacher, teacher, and doctor. My parents had figured out that I was going to be their son the doctor.

But while I found the biological sciences interesting, the physical sciences were far more to my liking. I have always been intrigued by how things work. As a child I was always taking things apart and putting them back together. I was happiest when there was a box with screws in it in front of me. I still am intrigued by the unknown.

I would say that I learned the most over the years from my mistakes. This is a real revelation in certain respects. Most of us want to avoid failure. We go out of our way to disguise failure. The real value in failure is what you learn from it. This is especially true in science. You learn in the moments when nature or a device is not behaving the way you think it should behave or the way a textbook told you it should behave. It took awhile for me to get to the point where I would accept that and find those moments to be interesting instead of frustrating.

It was one mistake after another that led us to the invention of the electret microphone at Bell Labs in the early 1960s. Bell Labs was a rather special place then, in the sense that you were more likely there than in other places to be assigned to a problem you knew little about. That happened to me, as a summer intern, when I was assigned to help a group of psychoacousticians who were interested in the interaural time delay. That is, they wanted to know, What is the delay between one pulse and a second pulse that will allow you to hear two sounds as opposed to one? It turns out to be 15 milliseconds.

They were using condenser microphones as headphones. The reason they were using condenser microphones is because they wanted a sharp pulse. The problem is that very few people could hear the microphone because the magnitude of the pulse was too low. I went to the library, and I found a publication that described a solid dielectric headphone that needed about 500 volts of bias on the device in order to make it linear and deliver a pulse of the magnitude they needed. I went to the machine shop and built headphones as shown in the paper. It worked. Everybody was happy.

But a few months later I got a call from the psychoacousticians. They said the devices were losing sensitivity. So I went back to the same publication, and it described this loss of sensitivity as a strange phenomenon that no one really understood. But it said the problem could be solved by reversing the polarity of the 500 volts of bias in the devices. Well, that was not a solution to the particular problem I was working on because a reversed bias meant a change in the direction of the acoustic pulse.

So I wanted to better understand what was going on here. Imagine that I have a capacitor, a 500-volt battery, and an oscillator. I took the battery out. So now it's an oscillator and capacitor headphone connected together. And then I heard the fundamental frequency, and I thought, Oh, this is not supposed to be happening. I thought a little bit about it and decided to short-circuit the capacitor headphone for a little while. I plugged it back in and there it was again, the fundamental frequency.

This was the moment I discovered electrets. I had not heard of electrets before. I never knew they existed. I went to the literature and learned everything I could about dielectric materials that could be polarized and generate an electric field in a way that makes it the electrostatic equivalent of a magnet. At that time, electrets were regarded as wonderful devices for teaching students about electrostatics but of very little practical use. This was mainly because the lifetime of electrets in the materials used in those years—mostly carnauba wax and beeswax—was about six months.

Some papers had floated the idea that modern plastics might present a way around this limitation, and that is what I began to explore with my good friend and colleague Gerhard Sessler. A beautiful thing about Bell Labs is that your door was never closed. If someone from a different discipline wanted to either gather knowledge or begin a collaboration, you were encouraged to accommodate their needs. Hopkins is very much like that, too, and it's a rare university in that such collaborative efforts are so encouraged.

We collaborated with a number of other people at Bell Labs, especially in chemistry and materials science, and we figured out that Teflon would be the best material for electrets. It has deep traps, and what we did was to figure out how to implant electrons in these traps and then close the trap so that the electron could not escape. This process was not easy to accomplish because many natural phenomena such as humidity and temperature affected the lifetime of the trapped charge.

That was another mistake we made. The true definition of an electret involves aligning the dipoles in a polar material, but that is not actually what we were doing. Instead, we were trapping these electrons. We should have thought of another name for it.

But it worked, and soon we were able to show extrapolated lifetimes for these electrets of over 100 years under a variety of climatic conditions. Now all of a sudden electrets were going to be extremely useful. Our director at the time was Manfred Schroeder. He thought Gerhard and I should start a company. He said, "Well, Jim, you should put the assembly line for manufacturing these microphones in your basement, and Gerhard, you can put the charging mechanism in your basement."

We were a bit confused; why would we ever want to leave Bell Labs? It had all the toys we ever wanted, and we got to spend every day there just thinking about new things.

Of course, had we taken his advice we would have made enough money to build and staff and operate our own labs. The microphones took off immediately. Now they are used in all manner of electronic devices. There is one right there in your audio recorder. The last time I looked it up, more than 2 billion electret microphones were being manufactured every year.

There are many other aspects of what I learned. Perhaps this was something I knew but didn't want to accept—but I learned that there are prejudiced people in the world. Early in my career, when I'd meet people, they'd look at me and I'd get this double take. I had a visitor once at Bell Labs, and instead of calling a secretary to escort the guy to my office, I went down [to get him] myself. We came back to the office and I told him to have a seat. He looked at me funny and said, "When is Dr. West coming?" I said, "He's already here."

My good friend Ilene Busch-Vishniac, who was the [Engineering] dean here [at Johns Hopkins] when I was first hired, did a postdoc with me at Bell Labs. We were at a meeting once, and we were arguing about the paper we had just seen presented. Some guy with a blue suit on walked up and asked her if I was bothering her.

Little things like that are learning experiences. They point to the need in this country to begin to understand that differences are OK—differences in religion, differences in race. I find it very interesting that what my father said to me is the same thing that I am saying to my grandsons: "Avoid policemen. They are not your friends." I was told that the minute I was able to get beyond the sight of my parents.

I can look at the world and I can see so many positive changes that have made life so much better, but on the other hand I can see that there are so many social issues that are basically at the same point. I am very saddened by that.

There is always something to learn. These days, I am trying to learn how to deal with venture capitalists. They seem to be quite interested in the work we are doing now on polarized nanofiber. We are trying to develop a device called a vector sensor for the Navy using the nanofiber. The work has been funded by the Office of Naval Research.

I think the venture money will be coming in, too. These polarized fibers have some interesting properties. Sensors would be flat, and they would be extremely small, made using polymer electrets set in nanofibers much thinner than a strand of human hair. We haven't put a vector sensor together yet; what we've done is prove that we can make the sensors that are necessary for the kind of array the Navy asked us to investigate.

Some interesting ideas are coming up around this technology. Think about the wing of an airplane or the key structural points on a bridge. Can we embed these fiber sensors into structures like that when they are being built and then be able to use the sensors to see more clearly when they are at risk for failing?

Another thing that has everyone interested is the way that these polarized nanofibers would generate some voltage from motion, so there are possibilities in energy harvesting and energy generation. Perhaps you could weave these fibers into a flag that is flapping in the wind, and that motion would generate the power needed for the light shining on the flag. Our bodies are in continuous motion. Can I weave these fibers into your jacket and let your movements generate voltage that charges your electronic device? Or can I put these in the water and harvest energy from the waves in the ocean?

This is not a new idea of mine. Other people have also thought of things along these lines. But what we're building is going to be dirt-cheap compared with some of the other ideas out there. The basic molecule is collagen, and this is very easy to produce. But we will see what happens. As in any new science, you don't quite know where it's all going to lead. That's another thing I've learned.

What I do every day very much depends on what I learn that day in terms of nature. That's really going to dictate what happens next. I try to talk about this with young kids. I tell them, "You think a famous athlete's life is exciting? You should try mine!" Athletes know what they are doing every day. I don't know—every day in my life is filled with new possibilities. That's the beauty in science.