Peabody student composes, stages opera about racism in the South

Peabody graduate student Frances Pollock grew up in Winston-Salem, North Carolina, the Tobacco South, and she was dumbstruck that she had never heard of George Junius Stinney Jr. before coming across a mention of him in winter 2014. On June 16, 1944, South Carolina had executed 14-year-old Stinney for the rape and murder of 11-year-old Betty June Binnicker and 7-year-old Mary Emma Thames in the segregated town of Alcolu. Police say Stinney confessed, in an interrogation conducted without his parents or legal counsel, though no written record of his confession was made. An all-white, all-male jury was selected, and Stinney was tried, convicted, and sentenced in a single day. Eighty-one days after his arrest, he was executed by electric chair. Because of his small size, a book was used as a booster seat when the electrodes were affixed to his body. In December 2014, Judge Carmen T. Mullen of the South Carolina Circuit Court vacated the judgment, exonerating the teen whose execution had earned but brief mentions in The Washington Post and The New York Times at the time. 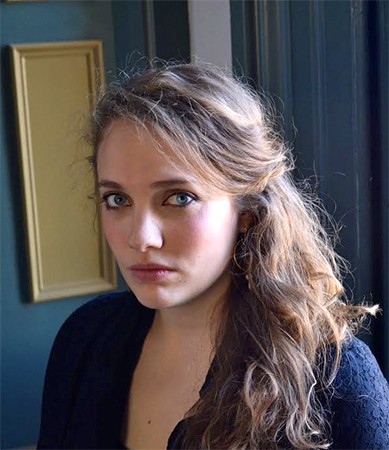 Pollock wanted to know more about him. And in searching and reading more and more about Alcolu and Stinney, Binnicker, Thames, and their parents, Pollock saw a world she recognized. "I know these people," she says. "This is a forgotten, very humanist, compelling story about people I totally understand. These are people dealing with their fear and prejudices that have come up through how they've grown up in this society. As someone who's grown up in a culture where division is still very palpable and real, I wanted to present this story in a way where people aren't just looked at as victims and villains."

Pollock, a second-year master of music in vocal performance student, last summer wrote Stinney as an opera exploring the devastation of systemic racism.

In high school she had become interested in the Innocence Project, the nonprofit legal organization that works with the wrongly convicted, after she heard Darryl Hunt speak. In 1989, the then 19-year-old Hunt had been sentenced to life imprisonment for the rape and murder of Deborah Sykes, a journalist in Winston-Salem. The Innocence Project used DNA evidence to free him and have the case dismissed.

Hunt became "a role model" in social justice issues, Pollock says. "The way that Winston-Salem works is very much like the town in Stinney—it's incredibly divided," she continues. "You grow up on one side of town or the other, and you don't meet a whole lot of people who don't look like you and don't think like you. That's still how that town functions and operates."

In Stinney, Pollock dramatizes how such institutional and cultural racism sculpts individuals and interpersonal relationships in small town America, and she knew she needed some help fine-tuning the project. Last May she sought advice from David Smooke, the chair of Peabody's Department of Music Theory and a contemporary composer with a passionate interest in social justice issues.

He politely told her that she was out of her depth. "She talked me through it, and I just looked at her and said, 'You can't do this,'" Smooke says. He wasn't quite sure yet of her compositional ability; he was also hesitant about the issues she wanted to tackle. "The issue of racial appropriation is something that I'm very aware of, and it seemed to be like she was walking on that line. And I just looked at her and said, 'No, you can't do this.' And she looked at me and said, 'No, I'm going to do this; either get on board or get out of the way.'"

What ensued were months of back and forth between the two. They went over her score note by note, chord by chord. Smooke asked her the reasons for certain scenes, and in a few cases helped her rethink a scene. "As we started talking, I realized she does know what she's doing," Smooke says. "What it ended up being is very much her original vision. This opera is about these horrific crimes, but really it's about people. It's about character. How does a family try to stay together as their child is being murdered by the state? It's about how does a community react when they've seen children killed? And so the music very much is about character and about these moments of intimacy."

Pollock wrote Stinney for a 10-piece chamber orchestra, which includes a string quartet, with instrumentation for jazz, blues, and country. She hears Stinney as an American story that needs American musical idioms, not Coplandesque symphonic interpretations. Snippets of gospel, blues, and country appear, each scene receiving the musical environment it needs.

This approach allows Pollock's musical ideas to reinforce her thematic ones. At a recent rehearsal, a group of singers went through the opening scene, in which Binnicker is attacked. Pollock wrote this scene as a single female character encountering a male chorus. The chorus's overlapping vocalizations at first create the ambient sounds of a rural morning—a background of bird song and insects—that, as the scene progresses, coalesce into a predatory hissing before swarming into a unison of violation.

More than a few times, the singers finish the scene and shudder, remarking on how creepy it is. As it should be: It's a disturbing reminder that the threat of sexual and racial violence floats in the very air we breathe, that the so-called villains who commit such unimaginable acts are people, neighbors, town folk. Stinney aims to take a sober look at that time when a small segregated town responded to the murder of two children by killing another and tried to call it justice.

If that's a difficult idea to think about and enact, that's because 1944 wasn't too long ago, and the conditions that foment such divisions persist today. With the help of a 2014–15 Diversity Innovation Grant from the Johns Hopkins Diversity Leadership Council, Pollock was able to cast Stinney with Peabody students and alums and members of the Baltimore gospel community. When she first started writing the opera, she imagined it might end up being something for which she gathered together some classmates to do a weekend afternoon read-through.

Now it's about to debut as a fully staged production. At that rehearsal in March, Pollock knew how much work lay ahead: costumes, stage blocking, orchestrations, everything. Peers and friends volunteered their time to help with the production. The cast and musicians devoted nights and weekends for rehearsals. Everybody involved understands that the issues the opera wrestles with are too pressing not to approach with respect.

"Stinney is not something fun that I'm doing on top of trying to do my master's," Pollock says. "It's something that has to be said and has to be said now. And I think a lot of people in the [Peabody] community have been looking for an opportunity to be part of something like this, which is why I think everybody's been so generous. It's beyond humbling to see what kind of support this project has received—humbling for me as a composer, and humbling that people are so invested in a story like this."

Stinney will have two performances, May 15 and 16, at 2640 Space (2640 St. Paul St.). Tickets are free but reservations requested with optional donations, a portion of which goes to the Innocence Project. Details at http://stinneyopera.com.