Ask an Expert: What is the real cost of fast food?

We Americans crave fast food for both its decadent yumminess and its ultra-cheap convenience. Regardless of whether it is a lack of willpower, a tight budget, or a hectic schedule that propels us toward the drive-thru, each path is a fast lane toward obesity. 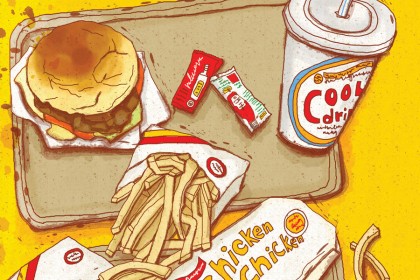 The extra calories fast food injects into our daily diets are directly contributing to the ever-climbing obesity rate in this country, even as more restaurants are serving healthier fare. The big chains are steadily offering healthier options, and yet we just keep ordering more unhappy meals—supersized, of course—with a side of grease and cheap plastic toys for our kids.

A provision in the Affordable Care Act will soon require all restaurants to post calories and nutrition facts on their menus, and many have started to do so ahead of the law, arming all of us to make better choices.

Will our children go for little oranges over fries? Will we opt for salads with grilled chicken and lite dressing on the side? Choosing healthier restaurant meals—or forgoing fast food entirely—could make a huge difference in both improving an individual family's health and helping to trim our national waistline, according to Sara Bleich, an associate professor in the Department of Health Policy and Management at the Johns Hopkins Bloomberg School of Public Health.

Your research shows that many national chain restaurants, including fast-food outlets, are voluntarily offering healthier food ahead of new federal requirements. What impact does this have on consumers' health?

It does not take a huge amount of additional calories each day to explain the rise in obesity. Among kids, the increase in obesity can be explained by an excess of about 165 daily calories. In our study, we found that newly introduced menu items had an average of 60 fewer calories than items that were on the menu in the prior year.

The drop in calories is primarily due to the introduction of new lower-calorie menu items in the categories of pizza and sandwiches. If we could remove 60 calories from the American diet, it could have a significant impact on reducing the number of excess daily calories and potentially on population obesity. On a given day, one-third of American adults and children eat at a fast food restaurant.

Is there an early adopter we can look at to see how cities or restaurants will perform in the big picture once this rule is in place?

Prior to the passage of federal menu labeling in the 2010 Affordable Care Act, dozens of cities and states around the country had passed menu-labeling legislation. The first was New York City, in 2008. A few studies have looked at the impact of local menu-labeling regulations on changes to menu items in restaurants. In unpublished results, the N.Y.C. Health Department estimated average calorie reductions of 10 percent in restaurants as a result of menu labeling. An analysis of the menu-labeling regulation in Seattle found that the calories in entrées in chain restaurants declined after menu labeling. Many more studies have looked at the impact of menu labeling on consumer behavior, and those results generally show little or no impact on consumer purchasing behavior. Therefore, I think that the bigger impacts of menu labeling may be seen through its effects on the chain restaurant industry's reformulation of menu items to have fewer calories.

Along with food, our drinks can pack on calories we may not be fully thinking about. What methods can you suggest from your research that would make calorie labeling on menus or soda bottles more effective when it comes to drink choice?

In our work, we have found that providing people with meaningful information about the calories in sugary beverages can reduce purchases. For example, if you tell adolescents that it will take five miles of walking to burn off a bottle of soda—which is equivalent to the 250 calories in the bottle—they purchase fewer calories, fewer sugary drinks, and smaller-volume sugary drinks.

Is it harder for city dwellers to be healthy when it comes to their options? Or is junky food just all around us, no matter where we live?

High-calorie and high-fat foods are everywhere, and where people have more choices, they tend to eat more. So, it is certainly the case that people in urban areas have more access to junk food. But they often also have more access to healthy foods. Regardless of where a person lives, it is hard to be healthy if they lack access to affordable and convenient healthy choices.

You grew up in Baltimore. Are children here particularly vulnerable when it comes to obesity and food-desert issues?

Many children in Baltimore live in neighborhoods where corner stores are a primary source of food, and these stores tend to stock unhealthy items. Those children are more vulnerable when it comes to obesity and unhealthy eating as our environment is a very strong predictor of our health and health-related behaviors.