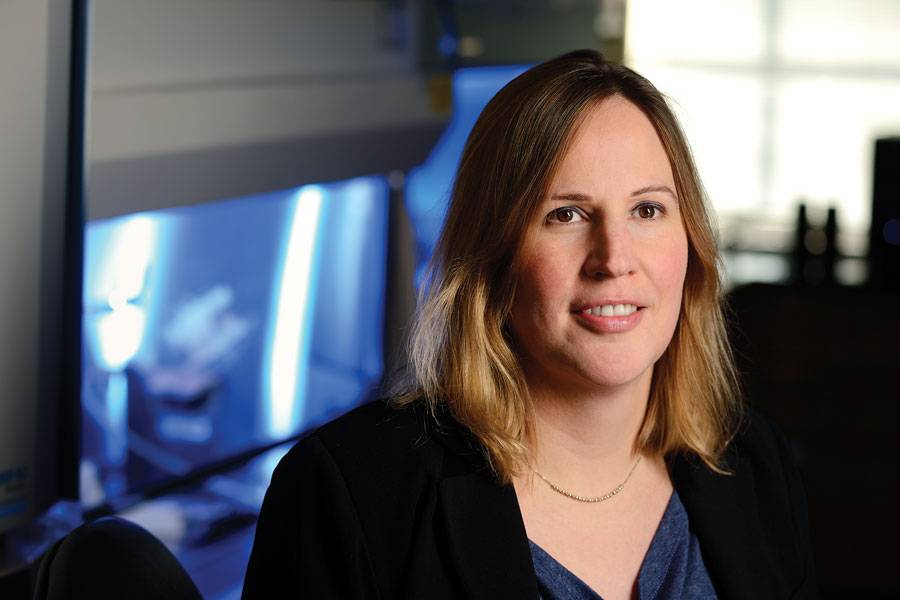 Image caption: Sharon Gerecht, inaugural recipient of the $250,000 President’s Frontier Award, is an associate professor in the Whiting School’s Department of Chemical and Biomolecular Engineering who works with stem cells.

Sharon Gerecht says that scientists always have different paths they would like to take with their research, but they usually have to stick to the road map for which they have funding. On Jan. 28, she was encouraged to break new ground in stem cell biology when Johns Hopkins University President Ronald J. Daniels and Provost Robert C. Lieberman presented her with the inaugural President's Frontier Award in the amount of $250,000.

"Now we have the opportunity to go in new directions, which is great," she says. "I am very happy, and I am humbled."

Gerecht was surprised when the president, provost, division leaders, and other colleagues arrived during her meeting with students at Homewood's Croft Hall to tell her she was chosen to receive the award.

"Sharon embodies the best traditions of Johns Hopkins research: vision, collaboration, and tireless pursuit of discovery," Daniels says. "This award reflects our commitment to her work and the advances she is poised to make in the field of stem cell research."

Gerecht, an associate professor in the Whiting School of Engineering's Department of Chemical and Biomolecular Engineering, has identified ways to control the fate of stem cells, which are the most fundamental building blocks of tissues and organs. She has coaxed them to form complex blood vessels—for the first time growing vessels in a synthetic material—that can feed the generation of new organs like the heart. She also has studied how to stifle their growth to starve cancer cells and inhibit metastasis.

Gerecht was awarded her PhD within the Technion–Israel Institute of Technology's Biotechnology Interdisciplinary Unit in 2004. She then worked as a postdoctoral fellow at MIT before joining the Whiting School faculty in 2007. She is an affiliated faculty member of the Johns Hopkins Institute for NanoBioTechnology and a project leader for the Johns Hopkins Physical Sciences–Oncology Center. Her work has appeared in more than 90 publications, and she holds 19 patents. She is also recognized for employing innovative thinking across disciplines as diverse as materials chemistry, engineering, and cell biology.

"One of the things that attracted me to Hopkins is the fact that people are very collaborative here," she says. "There is no problem to find someone that wants to work with you."

"There is no question that Sharon is a leader in her field with exciting new ideas," Lieberman says. "She is also a highly valued member of our faculty community who teaches, advises, and mentors students at all levels and is dedicated to empowering women and minorities in science and engineering. We are proud that she has made Johns Hopkins her academic home."

The Frontier Award was made possible by a generous donation from two alumni: trustee Louis J. Forster, who received degrees from Arts and Sciences in 1982 and SAIS in 1983, and Kathleen M. Pike, who received a diploma from SAIS Bologna in 1981 and holds undergraduate and master's degrees from Arts and Sciences, received in 1982 and 1983. It will recognize one person each year for five years with financial support for their research expenses. The inaugural year brought forward a highly competitive pool of 77 nominees demonstrating excellence in a wide array of academic pursuits across divisions.

In addition to the winner, Daniels is recognizing three outstanding finalists with a gift of $50,000 to support their research and advance their academic pursuits. They are:

• Scott Bailey, an associate professor in the Bloomberg School of Public Health;

• Samer Hattar, an associate professor in the Krieger School of Arts and Sciences; and

• Sean Sun, an associate professor in the Whiting School of Engineering.

The President's Frontier Award program launches a series of efforts by university leadership to support faculty as they pursue innovative and important research.

Two more faculty funding opportunities were recently announced. The Johns Hopkins Discovery Award program is focused on sparking new interactions among faculty from across the university, and the Johns Hopkins University Catalyst Awards are intended to help promising early career faculty establish their research programs. Both are supported by the offices of the President, the Provost, and the deans.

Speaking of the Frontier Award and the two new programs, Gerecht says they are "very needed" by the research community.

"There is not enough money to think out of the box and propose things that are risky," she says. "It's becoming very difficult to get this money. Hopefully this will fund out-of-the-box thinking or crazy ideas that might lead to breakthrough inventions and discoveries." 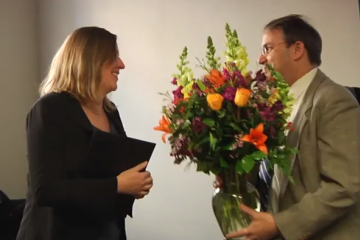