Jacquelyn Campbell is the Anna D. Wolf Professor in the Johns Hopkins School of Nursing's Department of Community-Public Health and one of the university's 17 inaugural Gilman Scholars. Campbell is also the national program director for the Robert Wood Johnson Foundation Nurse Faculty Scholars program and co-chair of the Institute of Medicine Forum on the Prevention of Global Violence. 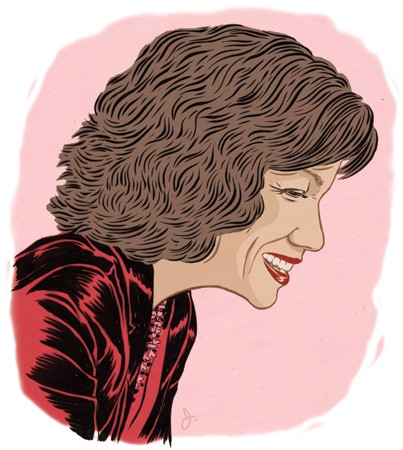 When it comes to what I've learned, the place to start is Dayton, Ohio. I was a school nurse at Roosevelt High School there between 1968 and 1972. I loved that job. It was an experience that really opened up for me the idea of how you did nursing in a community, collaborating every day with people from other disciplines—teachers, psychologists, and so on.

Coming into the job, I didn't know very much about the world these kids were living in. I didn't have any experience with life in the inner city. One thing I learned is how important it was to listen really, really closely to the kids so that I could learn about what their world was like.

One of the girls I adored at Roosevelt was named Annie. She ended up getting pregnant and having a baby before graduating. At that time, girls who got pregnant were kicked out of school. I thought that rule was incredibly stupid and unfair. Her parents were terribly angry with her. Annie ended up getting an apartment by herself at a young age. I also knew her boyfriend well, the father of her baby. His name was Tyrone, and Tyrone had a smile that would absolutely light up a room.

I worked on a project to try and change things for pregnant girls in that high school. It didn't get up and running until after I left, but they did start up a nursery so the girls could stay in school. Back then, having a nursery in a high school was a really new idea. I look back and see that as a very exciting accomplishment.

I had my own child. Then I had a second child. My husband was in this corporate environment where there wasn't much flexibility. I switched to working part-time jobs. But I kept in touch with some of the kids, including Annie. I went back to school to get a master's degree in community health nursing at Wright State.

One of our assignments was to go out in the community, identify a group of people, and do something to prevent the health problem that presented their highest risk of mortality. I called on some of the young women from Roosevelt. I told them I would bring cookies and we could all reconnect, and maybe they could help me with the assignment.

Then I looked at the mortality tables to see what was the biggest risk for young African-American women. It was homicide. I'm like, I'm a nurse—what does that have to do with me? This was long before anyone was thinking of violence from a public health perspective. But the program I was in was very progressive, very different. The faculty there said, "Go talk to these women and find out what they think are the things that put them at risk for homicide." Then they said, "By the way, you need to do a master's thesis soon, and this is a perfect topic."

In the middle of all this, we moved to Detroit. That's actually where I wrote up the thesis. I had done the research in a local police department in Dayton, reviewing the records of women who either were killed or who had killed someone themselves.

It turned out that whether it's getting killed or doing the killing, those cases are most often going to involve a husband, a boyfriend, an ex-husband, or an ex-boyfriend. There were other things I learned from the reports. One, there had usually been many calls to the police for domestic violence before the homicide. Two, many of the women had been to the emergency department beforehand. Apparently, the health care system wasn't doing very well by them. One of the things I've done in the years since then is to replicate that study on a national level. It's called the intimate partner femicide study, and it's one of the things I'm most known for in my career. The conclusions might not sound like news flashes today, but they were back then. No one was looking at this stuff.

I'll never forget those police files I had to study. They all had photographs of the dead women. I remember some of those photographs so clearly, even today. Oh, and the autopsy reports—they were horrible.

And then the crowning blow came. I got a call from a former colleague in Dayton, a psychiatric social worker. Hold on. I'm sorry. This still makes me cry. She gave me the news that Annie had been killed by her boyfriend—yes, by Tyrone, the guy with the smile that would light up the room. And then I saw it: Oh, my God, Annie had been abused for a long time. I started to remember incidents. One time she had a facial injury, and she told a story about it that didn't add up. Another time she said that she and Tyrone had been "fighting."

One thing we've learned in this field is that fighting is very different from arguing or other words in the minds of abused women. Fighting often means there is violence. If you hear that word, your next line should be, "Has it ever gotten physical?"

I couldn't stop thinking about Annie. If had known and if I had asked, if I had really asked, she would have told me. I believe that. That event solidified everything about my career.

I knew by then that if I wanted to prevent homicides in women, I needed to work with abuse victims. I started volunteering in a women's shelter. The concept of shelters was just getting started. I was also teaching in the nursing program at Wayne State. I had a colleague there named Janice Humphries. She was a pediatric nurse practitioner, and she started coming to the shelter to work with the children. Another colleague was a specialist in elder abuse. We all agreed that our students needed a course in family violence. We were all young and ready to take on the world, so we proposed a course and got it passed through the curriculum committee. I still teach an iteration of that course. It was one of the first of its kind in the country.

The funny thing was, we couldn't find a textbook to use. Janice and I were determined to get this course going, so we spent a summer writing the textbook. Years later, when I applied for the PhD program at the University of Rochester, I told the dean that story. I'll never forget the look on her face when she said, "Wait, you wrote a textbook years before you got into a PhD program?"

There have been many aha moments over the years. One big one came out of the work I did volunteering at shelters and working with abused women in support groups. There were times when they would be telling me their stories and I would get such a chill. What they were saying reminded me of things from the homicide folders from that police station in Dayton. But it seemed to me that I would be more scared than they were. The victims who were at the most risk didn't seem to be putting the pieces together. Domestic violence is always terrible. But what I began to see is that there are some specific kinds of cases that are highly dangerous. They're the ones most likely to end in the woman's death.

Some of the literature about domestic violence at the time was portraying the victims as these weak, pathetic people with no self-esteem. But I knew these women, and I could see that they were smart and resourceful. They were working really hard to figure out some kind of a solution, one that maybe would keep a father in their children's lives.

I began to work on the question of why the women in the most dangerous cases did not seem to be putting the pieces together. I started talking with them about things, very directly. One thing I learned is that there is this absolutely normal tendency to put scary stuff away in the back of your mind because you need to get up, get the kids to school, and do your thing all day.

I wanted to help them see for themselves when they were in a really dangerous place, so I started to put together a 20-item screening tool that is now pretty widely used. It's called the Danger Assessment. I worked for a long time on the wording of the items because I knew the words would be very important with these women. One sign of a dangerous abuser is that he forces his partner into sex. Abused women call this forced sex, but they don't think of it with words like rape or sexual assault. The same goes with strangulation—that's not a word they use. They call it choking.

I would ask these women who were in really scary situations if the abuse was getting more frequent and more severe. They would say, "Oh no, it's only every once in a while." So we developed this calendar exercise for the assessment, where they mark the approximate dates of abuse on calendars and then rate the severity of each episode. Now they can see for themselves—the numbers are right there in front of them. Increasing frequency and severity are key signs of a situation where the woman might get killed.

Over the years I've also been looking at long-term health outcomes for abused women who aren't killed. What we've learned is that these women have more central nervous system problems later in life, things like trouble concentrating and memory lapses. They also have more seizures. The evidence is showing us that one reason for this is the repetitive choking they endured, especially if it got to the point of unconsciousness. There are a lot of head injuries in abuse, too, so it's like what happens over the long term to boxers who take all those punches to the head.

I've been determined to try and be a catalyst for change in this area ever since I got started. That's one of the reasons I came to Hopkins in 1993. It's a whole lot closer to Washington, D.C., for one thing. But also, I saw that there is a reputation that comes with the Hopkins name that makes you much more likely to be called on and listened to in the world of public policy.

The whole path that I found myself on here has been so rewarding. The opportunity to work with so many students has been incredibly useful and rewarding. Then there are the collaborations with colleagues in so many other fields—medicine and psychology and public health, yes, but also the police and, really, the whole criminal justice system. I think that together we've been able to accomplish a lot when it comes to identifying those women who are being severely abused and coming up with better ways to connect them with help.

Another one of the great things about being here at Hopkins [is that] I'm getting to train the next generation of nursing scholars in this area. That has been a wonderful gift.