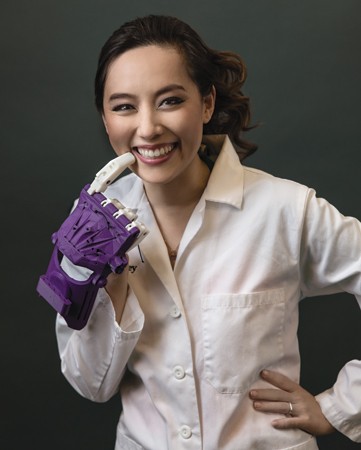 Why you should know her: Reiley, a doctoral student in computer science, recently published a children's book, Making a Splash, funded largely by a Kickstarter campaign and aimed at ages 6 to 10. Originally conceived as a gift for her niece, the book advocates the growth mindset philosophy that says intelligence is malleable and can be developed through dedication and hard work, as opposed to the belief that you're born with a fixed amount of smarts. The illustrated pages tell the story of two siblings, Lisa and Johnny, and how they differ in their attitudes toward learning. The takeaway: It's not how smart you are; it's how smart you can become if you push yourself. Take that, trophy generation.

As her Twitter handle @robot_MD suggests, Reiley's research focuses on surgical robotics and how to improve human and robotic interaction, and she already has one patent, on surgical skill evaluation. She's also a champion of personal robots. Yes, every home with a customizable automaton.

UNDERGRAD BS in computer engineering, Santa Clara University. FAVORITE BOOK Ender's Game. ON SELF-PUBLISHING 'MAKING A SPLASH' Wanted to learn about publishing the DIY way. CAREER INSPIRATION Her computer engineer father and time spent as a hospital volunteer, when she marveled at patients with pacemakers. GREATEST SCIENTIFIC BREAKTHROUGH IN HER LIFETIME Advances in personal computing and the Internet. "It's so empowering." PROSPECTS OF A ROBOT APOCALYPSE Minute. "Right now we have enough of a challenge programming a robot to move from one side of the room to the other. So robots that could rise up and attack us is an unfounded fear." SIDE PROJECT Founded TinkerBelle Laboratories, which supports low-cost DIY projects that address environmental, robotic, and health care needs. FAVORITE DIY PROJECT A humane mousetrap she fashioned at age 8 for a school science fair, and to catch her runaway pet hamster. TEN YEARS FROM NOW Somewhere at the intersection of technology and humanity. Definitely entrepreneurial. FAVORITE MOVIE Toy Story. WHY JHU? For its expertise and depth in the surgical robotics field.