Iranian-born writer, SAIS faculty member offers an antidote to isolation in her new book, 'The Republic of Imagination' 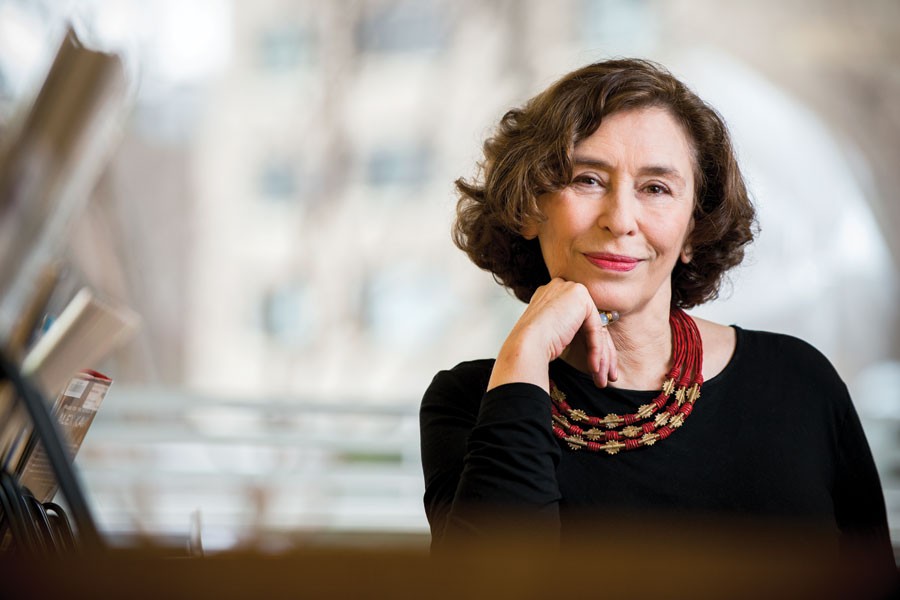 "Are you lonesome tonight?"

Elvis crooned the question in 1960. Half a dozen years later, the King's mop-topped progeny rephrased it with a Liverpudlian accent.

"All the lonely people—where do they all come from?"

Azar Nafisi proffers an answer and an antidote to our isolation, detailing it with passion in her latest book, The Republic of Imagination.

The remedy is in the title: the ability to call to mind things neither seen nor lived.

The liberating power of imagination—too often dismissed as the domain of the very young—is amplified here with sly, whimsical illustrations by Peter Sis, a Czech-born writer of children's books.

Nafisi argues that the contradictory experience of feeling less alone while in solitude—something akin to magic—is delivered through literature, particularly the Iranian-born author's specialty: American belles-lettres.

"Teaching [the value] of imagination is wonderful," says Nafisi, a visiting fellow at the Johns Hopkins School of Advanced International Studies, famous for her 2003 memoir, Reading Lolita in Tehran: A Memoir in Books, which rode the New York Times best-seller list for more than a hundred weeks. (And, in 2011, was set to music in a chamber opera by the Maryland composer Elisabeth Mehl Greene.)

Nafisi notes that the contours of the republic mapped in her new book—Huck and Jim riding the rapids of morality, George Babbitt's hunger for an imaginary fairy girl, small towns haunted by lonely, predatory hearts—are at sharp odds with the country of which she became a citizen in 2008.

"The contradiction," says Nafisi, in a coffee shop near her Foggy Bottom home in Washington, "is that on the one hand Americans cherish the idea of 'the dream' while they also commercialize it. They allow themselves to be manipulated by it."

To this point, The Republic of Imagination spends many pages arguing against the constrictions of the nation's Common Core curriculum in public education: the alleged supremacy of math and science at the expense of art now ascendant. The book is jacketed in her favorite color—blue—on which a drawing by Sis shows a woman flying across a starry, metropolitan sky, a book in one hand and a pen in the other. Subtitled America in Three Books, it is a polemic more interesting when discussing the power of stories (Nafisi is a wise and trusted guide through the universe of fiction) than the machinations of our culture wars.

The first of the three books is Mark Twain's Huckleberry Finn, an immortal narrative virtually synonymous with America itself.

"Huck leaves his loneliness behind and becomes a moral person when he connects to Jim," says Nafisi of the relationship between the urchin and the slave. "He helps Jim because he knows the pain Jim is going through. The only time he claims to be happy is when he was with Jim."

Next comes Babbitt by Sinclair Lewis, a conspicuously lonely man who in 1930 became the nation's first Nobel laureate in literature.

The story of George Babbitt—solid citizen, successful Midwestern real estate salesman, and incorrigible daydreamer—the novel depicts how desolate it can be deep inside the mainstream, especially with friends, neighbors, and colleagues for whom commerce is akin to patriotism.

"His external life has no connection to his internal life," says Nafisi, past director of two SAIS programs: the Dialogue Project and Cultural Conversations. "It begins with him dreaming of his fairy child and ends with him saying that he never did anything in his life that he wanted."

The third—perhaps the most compelling section of Republic—puts forth the romantic notion that it is less lonely to be a marginalized outsider (as many artists and dreamers are) than a cog at society's center.

This is the 80-page passage concerned with the sensational 1940 debut best-seller The Heart Is a Lonely Hunter, by the then 23-year-old Carson McCullers, herself an outsider who would go on (not unlike Diane Arbus) to portray the lives of Americans so far beyond the margins that they often go unseen.

In the "Carson" section of the book, Nafisi says she has "come to think of [this essay] as her credo. … [McCullers] writes that Americans 'tend to seek out things as individuals, alone. … The European … knows little of the moral loneliness that is native to us Americans.'"

Through immersing herself for decades in tales about America and by Americans, this headstrong daughter of a former mayor of Tehran and of one of the first women in the Iranian parliament embraces the existentialism McCullers believed natives of the United States are born with.

"We bring alternative eyes to these books, and it gives them new meaning," says Nafisi. "I always encourage my students not to just read about themselves."

Azar Nafisi joined the SAIS faculty in 1997. Not currently in the classroom, she has taught culture, aesthetics, literature, and the relationship between all three and politics.

This last bit of expertise was hard-earned: When she was a child, her father—while mayor—was falsely imprisoned by enemies who included the Shah, Mohammad Reza Pahlavi. Her father was ultimately exonerated.

Two days after defending her PhD dissertation in 1979—the year of the Islamic Revolution in Iran and the takeover of the American embassy there—Nafisi returned home, in large part because her father was lonely without her. "I returned to Iran because I always dreamed of return … but my timing was awful," says Nafisi, a self-described contrarian who has compared life in the Islamic Republic to "having sex with a man you loathe."

Referencing a first, foolish marriage at 17 to a man she did not love and, later, "almost 20 years in post-revolutionary Iran," Nafisi says one "has to experience certain things; no matter how traumatized they leave you, they will teach you."

Nafisi's undergraduate degrees and doctorate in English and American literature were earned at the University of Oklahoma in Norman, not a fabled world academy she once dreamed of but still cherished.

In Republic, she writes at length about her student activist and anti-Vietnam involvement in Norman—easily the most progressive corner of Woody Guthrie's home state—and credits her time there and heated debates about writers like William Faulkner and Flannery O'Connor as key to her development.

Nafisi has been a visiting fellow at the University of Oxford and in 2006 was awarded a Persian Golden Lioness Award for literature by the World Academy of Arts, Literature, and Media.

Among her greatest honors—a thrill Nafisi ranks as high as the birth of her own books—was the invitation to write the foreword to the new Penguin edition of Huckleberry Finn.

Such is the outline of her curriculum vitae. Almost everything else you'd want to know—secrets dark and thorny that other families would keep hidden, particularly less-confessional, non-American families—can be found in the intensely intimate book that bridges Reading Lolita and The Republic of Imagination.

Things I've Been Silent About: Memories of a Prodigal Daughter—taken from a list she made in a diary—charts the author's life of cultured privilege in an unhappy Iranian home from about the age of 4 through the deaths of her parents, the constantly sparring Ahmad and Nezhat Nafisi, at the book's center. Built upon thousands of pages of her father's private journals—many of them written while serving time in a four-year "temporary" jail cell—the book is wrenching in many ways.

While Silent About documents the executions of relatives, former students, and her high school principal under the rule of Ruhollah Khomeini, it is somehow most sad when discussing her bitter, narcissistic mother, who derided her firstborn for sharing "the same rotten genes" as the father she adored.

Nafisi returned to the United States in 1997 after leaving several college teaching positions constricted by Islamic rule. Her refusal to wear a veil was one of the sticking points. Between leaving her university posts in Tehran and landing in Washington, she tutored a handful of women in private, using Vladimir Nabokov's Lolita as one of the central texts. It became the basis of her renowned work.

Departing Iran, Nafisi went to kiss her mother goodbye. With an almost terminal bitterness, the older woman turned away. They would never see each other again.

For all of the splendor and status of her upbringing—the Nafisis are known in Iran for accomplishments in literature and medicine—it was one that might have pushed others toward drink or drugs or other means of self-sabotage.

Yet it led Azar to seek succor down the rabbit holes of fiction, perhaps not as deeply as Alice or as far as the knight errant Don Quixote, whose love of adventure stories drove him mad. But far enough for comfort.

When asked about her own loneliness—eased in childhood with immersion in epic Persian poetry beloved by her father along with Dickens and The Wizard of Oz—Nafisi smiles (it's a great smile) and is somewhat coy.

"I am less lonely when I'm reading and writing," she says, "when I am connecting to something very deep inside of me.

"The beautiful contradiction is you need to withdraw from the world to do it," she says. "Yet what you are reading has been read by millions, and what you write will be read by strangers."