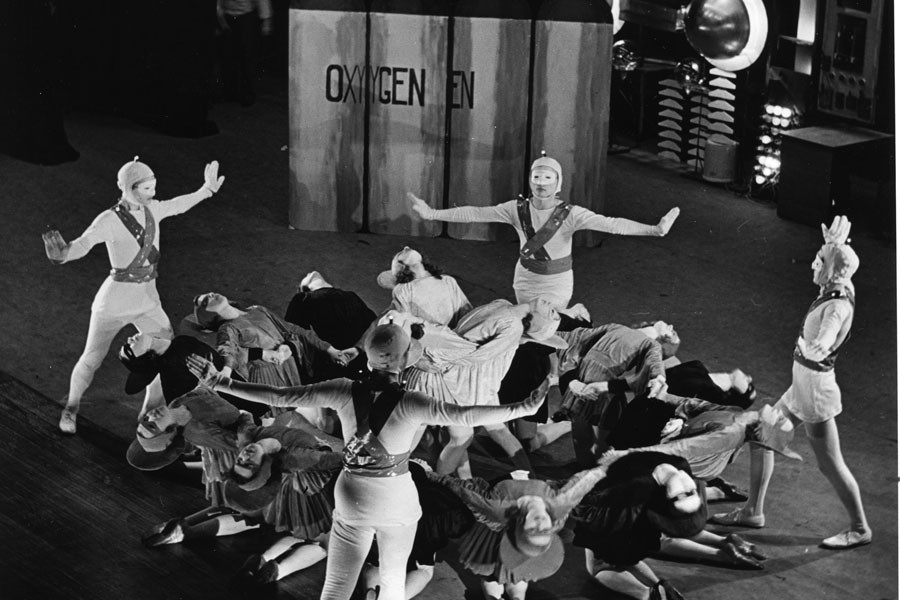 When Peabody Dance celebrates its centennial March 26 to 29, it's not only marking 100 years of offering dance instruction at Peabody Preparatory, the community school for the performing arts housed at the Peabody Institute of the Johns Hopkins University. It's advancing its unique ability to provide young dancers with the tools to become creative artists.

Collaborations have been part of Peabody Dance's process since its inception, and last summer students and faculty worked out ideas that will debut during the centennial weekend, which includes a conference, historical exhibition, films, and a pair of performances.

The collaborative piece Dear Mother premieres that weekend, and some of its choreography grew out of Constance Dinapoli's intensive classes. Dinapoli, the artistic coordinator of contemporary dance at the Preparatory, asked her students to recall their earliest memory; maybe it was of walking, or falling, or laughing. She invited those students to consider how that memory made them feel, and how they might express that emotion with their bodies. "They made a short [physical] phrase that reflects that [emotion] in movement," Dinapoli says. "I looked at their movement, and I helped them arrange it into more of a dance phrase."

Peabody Dance is one of the oldest dance training centers in the country, offering technical training in classical ballet and modern dance. Today, it also strives to give its students opportunities to work with other artists, not just learn from them. Melissa Stafford, its director, says that the first dance class that the Peabody Institute offered, in December 1914, was eurythmics, a way to teach musicians and music teachers about music through movement.

That first class "put us on an innovative path and led to a collaborative production of Orpheus and Eurydice in 1922 that had 200 dancers, musicians, and singers," Stafford says.

Ever since, Peabody Dance has embraced collaborative projects that bring student dancers into creative contact with not only dance professionals but musicians and visual artists—and the occasional scientist. Stafford mentions The Chemical Ballet, a 1939 collaboration between Carol Lynn and a Johns Hopkins University chemistry professor, Donald H. Andrews, in which dancers portrayed different chemicals and their reactions. (That was nearly 50 years before Peabody became a division of Johns Hopkins.) The dance was performed at the annual meeting of the American Chemical Society in Baltimore and was covered in the April 17, 1939, issue of Life magazine.

Lynn brought this interest in collaboration with her when, in 1947, she was appointed Peabody Dance department chair, a position she held until 1970. She was an early proponent of filming performances, a practice she began during her summers as associate director of Jacob's Pillow Dance, the western Massachusetts center founded by dance pioneer Ted Shawn. Jacob's Pillow became a crucible for modern American dance—Alvin Ailey, Jack Cole, Martha Graham, and José Limón all trained or performed there—and Lynn rubbed shoulders with the dancers who passed through, such as revered ballet dancer and choreographer Antony Tudor, and invited them to Peabody.

Lynn fostered Peabody's long-standing relationships with noted training centers and figures in American dance. Some dancers who trained with her as kids would return as teachers, among them Jane Ward Murray, who studied under George Balanchine, danced with a precursor company of New York City Ballet, and in 1947 joined the Peabody Dance faculty. Others—including modern dancer Dale Sehnert, Spanish dancer Maria Morales, and tap dancer Mary Jane Brown—helped launch new programs at Peabody.

One of Lynn's and Sehnert's students was a young Baltimore girl named Martha Clarke, who matured into a seminal multidisciplinary artist who combined dance with elements of theater and music. And when Carol Bartlett, Peabody Dance director from 1988 until her death in 2012, was looking for a choreographer collaborator to create a program to celebrate the Peabody Institute's 2007 sesquicentennial, she invited Clarke to become Peabody Dance's first artist-in-residence.

The collaborative showcase they created, New Work, included a piece set to music composed by Angel Lam, then a Peabody Conservatory doctoral student. Bartlett tapped Lam again for Meander, a 2008 collaboration between the choreographer, the composer, and MICA faculty artist Pat Alexander. Bartlett had this creative team in mind when she began planning in 2010 for Peabody Dance's centennial, but her death prevented that piece from progressing beyond the idea stage.

When Dinapoli joined the faculty in 2013, she met with Alexander and Lam to carry on what they had started with Bartlett. And Dinapoli, a former Paul Taylor Dance Company member, comes from a similar creative mindset as Bartlett, who often created performances in collaboration with her students. "I care about making my studio a student-centered room, even my technique classes," Dinapoli says. "I want [students] to grow as artists as well as dancers. They have a voice, and I want to help develop their voice. It's a collaborative process, teacher-student. That is what life is like as a professional."

These collaborative opportunities make Peabody Dance unique among training centers, Stafford says. "My brother and sister have professional dance careers, and we had world-class ballet training, but we never had the opportunity to become part of the collaborative process while still students," Stafford says. "Our students work with choreographers, répétiteurs, visual artists, composers, and musicians, and learn how artists negotiate the creative process. And that's something that's happened at Peabody from the very beginning."

For a full schedule of Peabody Dance centennial events, go to http://peabody.jhu.edu/dance100.