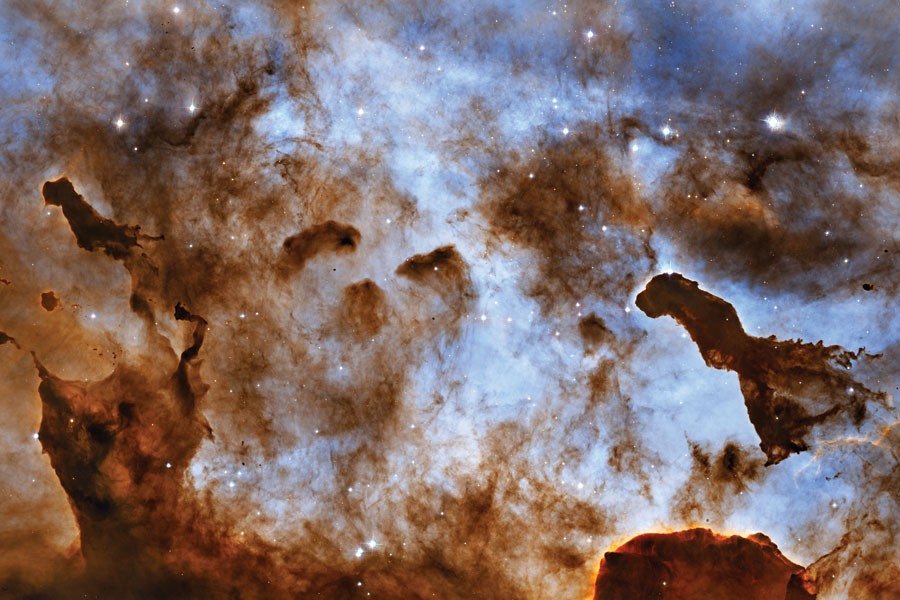 When the space shuttle Discovery lifted off from Kennedy Space Center on April 24, 1990, many things weren't around that are today: a commercial Internet, smartphones, Justin Bieber. We also didn't know a single planet outside our Milky Way solar system (today, astronomers have identified thousands). We didn't know how old the universe was (about 13 billion to 14 billion years, turns out). And we didn't know that flattened disks of gas and space dust form the building blocks of everything—planets, matter, us.

Those scientific clarifications and findings are in part or whole thanks to the Hubble Space Telescope, which Discovery placed in orbit.

Two upcoming concerts celebrate Hubble's 25th anniversary this year with music pieces inspired by the telescope's discoveries and by human drive that seeks to know more. On March 7, Jed Gaylin leads the Hopkins Symphony Orchestra through Los Angeles–based composer Russell Steinberg's Cosmic Dust at Homewood's Shriver Hall in a program that includes Ravel's Mother Goose Suite and Rachmaninoff's Piano Concerto No. 3 in D Minor with soloist Clipper Erickson. And on March 29, To See the Stars, a multimedia song cycle composed by Fay Chiao, a DMA composition student at the Peabody Institute, will be debuted at the Maryland Science Center's Davis Planetarium.

Humans have always been inspired by the heavens, but "what has become more powerful with modern science is that we now actually know for a fact that we literally are stardust, that all of the elements that are in our bodies were forged in the nuclear furnace of stars," says Mario Livio, a senior astrophysicist at the Space Telescope Science Institute, which operates Hubble, during an interview in his office on Johns Hopkins' Homewood campus. Livio, who was joined for the interview by HSO music director Jed Gaylin, will give a talk about the science of stars before the March 7 HSO concert, and he points out that artists have been inspired by space for centuries, and that elements of mythology have been mapped onto the sky.

"When the universe started, there were only hydrogen, helium, and a trace of light elements," Livio continues. "All the other elements, including everything that is in us—carbon, iron, oxygen—were formed inside of some stars. And when those stars die, they either explode or eject their layers, and those materials are returned into interstellar medium, and new stars and planets and humans form from those."

Understanding this origin of everything initially inspired Steinberg to compose Cosmic Dust. He had heard a rabbi speak about death, pointing out that because we say "ashes to ashes, dust to dust" at burials, we might assume it means returning to the earth. "But he said the idea of dust is about our origins; it's about coming into contact with what we've always been—stars," Steinberg says by phone. "And when he said that, it just clicked for me about how profound those Hubble images have been."

Cosmic Dust debuted last year in Los Angeles in a performance by the New West Symphony, which had commissioned it along with the HSO and the Bay-Atlantic Symphony. Steinberg considers it a 14-minute symphony that evokes our fascination with the cosmos, and its performance is paired with images of space, many of which come from Hubble. "I think what's so profound about this realization that we're part of [the cosmos] is one of the reasons I believe we're so infatuated with the work the Hubble has done," Steinberg says, adding that when he looked over the list of projects associated with Hubble, he was struck by how many of them pursue some human connection.

"Like the search for exoplanets," he says. "What are we looking for? We're not looking for any types of rocks. We're looking for rocks that could support life, that could hold human beings in the future. We're looking for a human connection to something that's so outside our regular understanding of time that it almost makes us cower it's so powerful. We're trying to find a way that we can really connect this with our humanity."

Gaylin agrees. "Creativity, whether in art or in science, involves a fierce dedication, a pushing and pushing and pushing," he says. "That kind of perseverance, that kind of willingness to fail in the arts and sciences is part of what it is. It reminds me of that line attributed to [pianist and Peabody faculty member] Leon Fleisher about Leonard Bernstein—he brought you to the edge of the abyss and sometimes you fell in there with him, but didn't you want to know what it looked like?"

The human curiosity to see what's in the abyss or the outer reaches of the universe is what inspired Chiao. Her To See the Stars is a celebration of the coordinated human labor behind Hubble, the drive to seek answers to new questions. Last year she had the chance to interview a number of people who work on Hubble, including Holland Ford, a professor in the Johns Hopkins Department of Physics and Astronomy and an astronomer at the Space Telescope Science Institute; and Ken Sembach, the mission head of Hubble, and she was struck by their common sense of purpose.

"Each one of them really talked about how they go into work every day with a strong sense of mission," Chiao says. "That really inspired me, this sense of being part of this huge endeavor dedicated to study beyond what we already know. I latched onto this aspiration: What compels people to look at a body of knowledge, to understand that there are questions that can't be answered in their lifetime, and to say, I'm going to go for it anyway"?

Chiao tapped a number of her Johns Hopkins peers for To See the Stars. The libretto was penned by Dara Weinberg, who received an MFA from the Krieger School's Writing Seminars, and will be performed by the Lunar Ensemble, the Baltimore-based new music group co-founded by, and filled out with, Peabody alumni, graduate students, and faculty members. The roughly 45-minute piece is divided into two parts with an instrumental interlude, a structure Chia says is somewhat informed by how technological advances, such as Hubble, catalyze huge jumps in knowledge.

Those huge jumps come about through human labor, and gaining an understanding of the mammoth collaboration that went into starting and sustaining Hubble left an impression on Chiao. She says that during her interviews, she asked Sembach if working on Hubble prevented him from pursuing more of his own research. "And he said, 'Yeah, but I don't mind that I publish less papers if this can succeed,'" she says. "That really inspired me, so I wanted to try to contribute to their mission in my own way."

And for Livio, the public accessibility of Hubble makes it unique among science experiments. For 25 years now, the telescope has captured images that reach and captivate the lay person, providing the opportunity to appreciate the epic human achievement behind our tiny place in time. "We have learned in some sense that our physical existence is very small," Livio says. "We live on a rather small planet around a rather ordinary star in an ordinary galaxy. And with Hubble we now know, even in just the observable universe, there are hundreds of billions of galaxies like ours.

"So in physical terms we appear to be insignificant, but in terms of what we have learned, our knowledge has basically expanded just as fast as we say our universe expanded," Livio continues. "Before we discovered that we are on this small planet, we didn't know any of that—everything I just told you is a discovery of humans. That puts us in a different perspective. Physically, we're not that important, but from an intellectual perspective, we are very important because we know all this—we have learned all of this."

The HSO performs Cosmic Dust twice at Homewood's Shriver Hall: at 8 p.m. on March 7 and at 3 p.m. on March 8 in the free 22nd Annual Concert for Children and Families. The Lunar Ensemble performs To See the Stars twice on March 29 at the Maryland Science Center—at 4 p.m. (general admission) and 7 p.m. (RSVP only); more information at https://www.facebook.com/toseethestars.