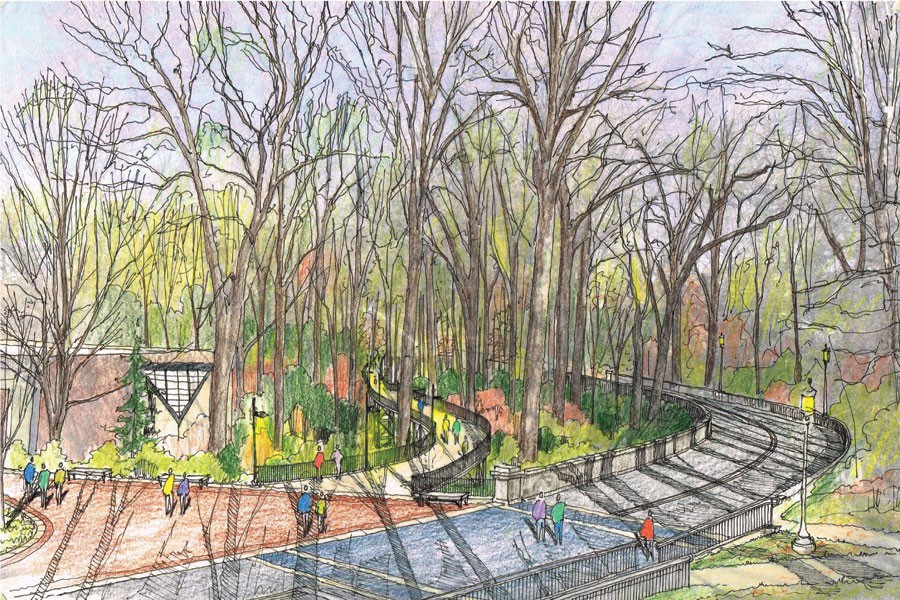 Image caption: An architect’s drawing of a nearly 350-foot-long pedestrian bridge, which will start at Olin Hall and reach north toward the San Martin Center.

Johns Hopkins University is launching a yearlong $15 million project to improve San Martin Drive, the scenic tree-lined road that winds around the back of the university's Homewood campus.

Among the enhancements planned for the 0.9-mile thoroughfare is a major sidewalk upgrade to safeguard pedestrians, including many runners who use San Martin for workouts. A road where some sidewalks now suddenly end and others are too narrow will instead be flanked by a continuous, up-to-standards path for those on foot—including a pedestrian-only bridge almost 350 feet long.

"The university is about to make one of the most attractive, most pleasant roadways in the Homewood campus area even better," says Daniel G. Ennis, senior vice president for finance and administration. "We want it to be safer for pedestrians, bicyclists, and drivers, and even more beautiful for the campus community, our neighbors, and campus visitors."

The drive is owned by Baltimore City, which is allowing the university to undertake the safety and aesthetic upgrades. The project—slated to begin in late February and last about 12 months—is being paid for by the university, primarily through gifts.

The new continuous pedestrian path will stretch from University Parkway, where San Martin begins, south to Wyman Park Drive and then continue another tenth of a mile along Wyman Park to Remington Avenue.

To make that possible along a portion of San Martin Drive where there is now no sidewalk at all and the road cannot be widened, the university will build a 36-foot-tall, 8-foot-wide pedestrian bridge, separate from but roughly parallel to San Martin. It will begin at the university's Earth sciences building, Olin Hall, and extend along the west side of the roadway north toward the San Martin Center.

One of the trickiest spots on San Martin, along the S curve at the West Gate, will also become a three-way-stop intersection. That will help drivers see each other and properly yield the right of way to each other and to pedestrians.

"These new gates will improve the look of these important approach routes to Homewood and more clearly indicate to visitors that they have arrived at Johns Hopkins," says Alan R. Fish, vice president for facilities and real estate. "Just as the recent Charles Street reconstruction enhanced the beauty and safety of the front door to the Homewood campus, the San Martin project will greatly improve an important alternative route to our university."

San Martin Drive's history as a scenic roadway dates back to Olmsted Brothers Landscape Architects' landmark 1904 report on Baltimore City parks and OBLA's subsequent designs for Wyman Park. The city park includes a length of the Stony Run streambed downhill from San Martin as well as the dell along Charles Street; it was established by the city in the division of the old Wyman family estate. The bulk of the estate was given by the family to create the Homewood campus.

The work will be divided into three phases, avoiding the need to close the entire roadway at any one time. Drivers will always be able to access the San Martin Center and garage, the Olin Hall parking lot, the Carnegie Institution of Washington building, the university's West Gate, and the Steven Muller Building and garage (headquarters of the Space Telescope Science Institute). At various times, however—depending on which phase of the project is active—drivers may have to detour around their usual routes to those destinations.

The San Martin Drive project website, http://ts.jhu.edu/sanmartindrive, includes more information, including artist renderings of planned improvements and details of the phases and the detours in effect during each phase.