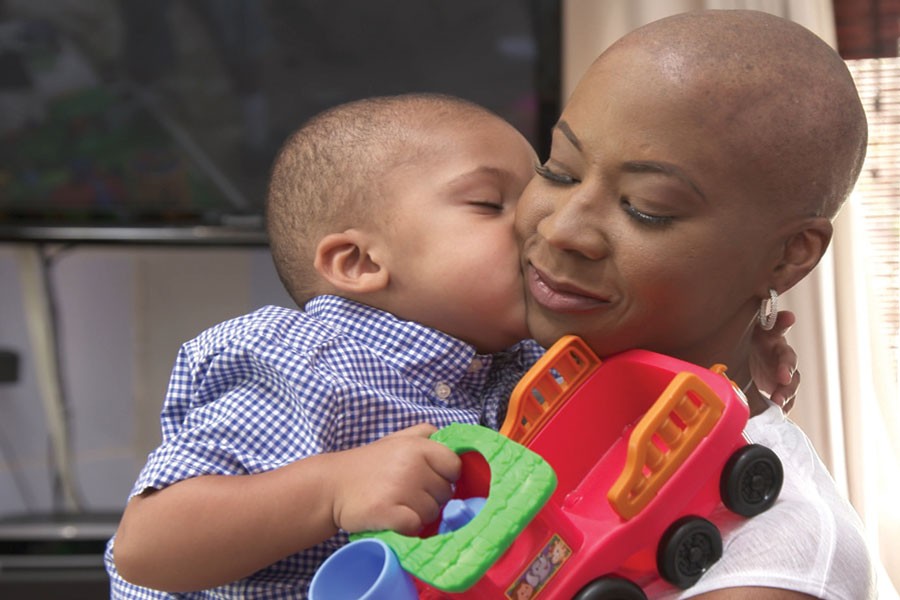 Image caption: A still from a scene in episode two of ‘Cancer: The Emperor of All Maladies’ that was filmed at the Johns Hopkins Kimmel Cancer Center.

Cancer comes in many forms, and it doesn't discriminate. White, black, young or old. Abnormal cells grow inside you, out of control and at the wrong time and place. The disease can spread slowly or swiftly, and wantonly kill. It's the second-leading cause of death in the United States and touches nearly every family.

Throughout recorded history, mankind has confronted the disease that derives its name from the Greek word for crab. Today, the struggle continues, but decades worth of breakthroughs have brought hope and promise to millions. Some believe we're on the cusp of a cure as we begin to unravel the causes of cancer at the cellular and genetic levels.

The multihued story of cancer—from its ancient roots to the latest in gene therapy and immunotherapy, and all the discoveries and setbacks in between—will be told in an upcoming three-part, six-hour PBS documentary series executive produced by Ken Burns and directed by Emmy Award–winning filmmaker and writer Barak Goodman. The series, Cancer: The Emperor of All Maladies, is based on the Pulitzer Prize–winning book of the same name by Siddhartha Mukherjee, a cancer specialist at Columbia University. It premieres on Monday, March 30, on PBS affiliates, and will be shown over three consecutive nights.

The series will weave in the historical narrative of cancer, from the time of the pharaohs, to the "war on cancer" unofficially launched with the National Cancer Act of 1971, to the present day.

For the segments that focus on patients' stories, the production team filmed primarily at the Johns Hopkins Sidney Kimmel Comprehensive Cancer Center and the Charleston (West Virginia) Area Medical Center. Film crews, which arrived in Maryland just after Hurricane Sandy hit the area, embedded themselves at the Kimmel Center for 18 months to document the hopeful and sometimes heartbreaking narratives of its patients, clinicians, scientists, and staff.

Goodman says his chief aim for the series was to give people hope, and lay bare a disease where progress is being made, despite the many challenges. "We're at a tremendous moment in this story of cancer, as we're on the threshold of huge breakthroughs," he says. "Everyone we spoke with was an optimist."

Goodman says the production team chose Johns Hopkins because it wanted a leading, cutting-edge hospital on the forefront of cancer treatment and research. Johns Hopkins also has valued experience with film crews, he says, as it was the location for two ABC documentaries, Hopkins 24/7 (2000) and its sequel, Hopkins (2008).

By embedding crews for such an extended time, Goodman says, the film team was able to follow and complete many story arcs, and provide a more insightful and honest portrayal of care.

Patrick Brown, an associate professor of pediatric oncology at the School of Medicine and director of the Kimmel Center's Pediatric Leukemia Program, says that camera crews spent months around his unit, and that he was frequently filmed on rounds when he would talk with patients and their family members. In the trailer for the series, Brown visits a child to deliver news that her kidney tumor has been significantly reduced thanks to recent chemotherapy treatments. The dramatic before-and-after X-ray images he shows her of the tumor lead to claps of joy from her mother, sitting at her bedside.

Brown says he initially had reservations about the intrusion of cameras into such personal moments.

"I was a bit nervous. I thought the crews could be obstacles or somehow get in the way of us doing our job well," he says. "But [the production team] was amazing and as unobtrusive as possible. Eventually, you get used to their presence and feel less self-conscious as you get to know the people telling the story."

Brown says the cameras captured him in light moments with his patients, and during tough conversations with those in dire situations. He says he hopes viewers will see both how far medicine has come in dealing with cancer and how far we need to go.

"We're on the cusp of making major strides," says Brown, who joined Johns Hopkins as a resident 16 years ago. "There's been this explosion of scientific knowledge that has translated to better treatment. But the job is certainly not over. I think there's value in getting this information out to the public."

The crews were given nearly full access, though they had to respect the patients' and caregivers' wishes if they didn't want to be filmed at a particular time.

William Nelson, the Marion I. Knott Director and Professor of Oncology at the School of Medicine and director of the Kimmel Center, says that Johns Hopkins agreed to be part of the project because it believed in the message and trusted the filmmakers.

"WETA and Ken Burns are a long-standing quality outfit that produces very high-quality and thoughtful documentaries. We were very impressed with the aspirations of the filmmakers to make this be an educational tool," Nelson says. "Hopefully, the series will go some way to alleviate some of the fears of diagnosis and demystify the disease more."

Nelson says cancer treatment has changed dramatically over the past decade. Only a few years ago, he says, the research focused on drugs that killed cancer cells and hopefully didn't hurt the patient too much.

"But now we're in an era of medications that we know more about, such as who they should work for, and who they won't," he says. "You just have to look at the pioneering work of Bert Vogelstein and Ken Kinzler, who are looking into the genetic roots of cancer, to see how far we've come."

Nelson, who was not filmed in the series, says that he's certain the show will provoke much thought and emotion, and show off the critical role of the caregiver.

"When you hear 'you have cancer,' people are jolted," he says. "It starts an emotional journey for them, and they are scared to death. But as physicians, this puts us in a position to be a caregiver in the purest sense," Nelson says. "What makes you a good cancer doctor is that you enter into a relationship, although at times the situation can seem overwhelming. For us, success is not only judged by if we can cure them or not; it's did we give them back control over their environment and their lives? Were we able to allow them quality time with their family and friends? If we delivered them into a place like that, it's also satisfying."

The American Association for Cancer Research, in conjunction with the Johns Hopkins Kimmel Cancer Center, will present a screening and panel discussion called "A Conversation on Cancer: A Town Hall Discussion" with the creators, patients, and scientists associated with Cancer: The Emperor of All Maladies. A 20-minute clip of the series will be shown at the event, which will take place from 1 to 2:30 p.m. on Monday, March 23, in the Chevy Chase Auditorium at the Sheikh Zayed Tower of the Johns Hopkins Hospital, East Baltimore campus.