Where in the World: A look at JHU's global endeavors in Antarctica

90% of ice on Earth found here 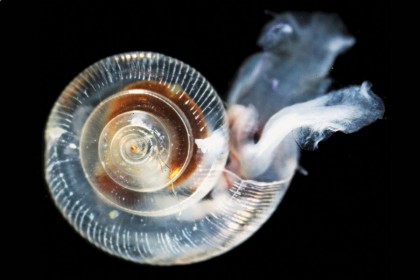 0 permanent residents (though 1,000–4,500 researchers are stationed here at any given time)

The fate of the sea butterfly

In the snail world, pteropods are among the most photogenic. These small aquatic invertebrates have a dreamlike translucence and swim using beautiful "wings," earning them the nickname sea butterflies. Beauty aside, pteropods are a critical part of the oceanic ecosystem, as they are the primary diet of larger species—such as salmon and krill—and are responsible for a large proportion of the carbonate flux to the deep, which plays an important role in the global oceanic carbon cycle.

Being snails, they have shells, which are made of calcium carbonate and are highly affected by steadily increasing ocean acidification. Last spring, the Whiting School of Engineering's Rajat Mittal and a team of researchers from Johns Hopkins and Georgia Tech traveled to the Palmer Station in Antarctica to collect and study the polar species of these animals to better understand the effects of ocean acidification on their swimming characteristics and ability to survive. The team chose this location as acidification is more pronounced in colder temperatures.

"Bigger picture, we wanted to see what the potential effect of ocean changes might have on their shells, which are becoming more eroded and degraded over time," Mittal says. "If [pteropods] become extinct, the ocean not only loses a critical link in the food chain, but it could potentially change the global oceanic carbon cycle."

In November, team members traveled again to Antarctica to take more measurements, and they recently presented their preliminary findings regarding the locomotion of these animals at the Annual Meeting of the American Physical Society's Division of Fluid Dynamics. In June, Mittal will travel to the Arctic to study the pteropod species in that region.