How Peabody's Fred Bronstein is leading the oldest music conservatory in the U.S. into the 21st century 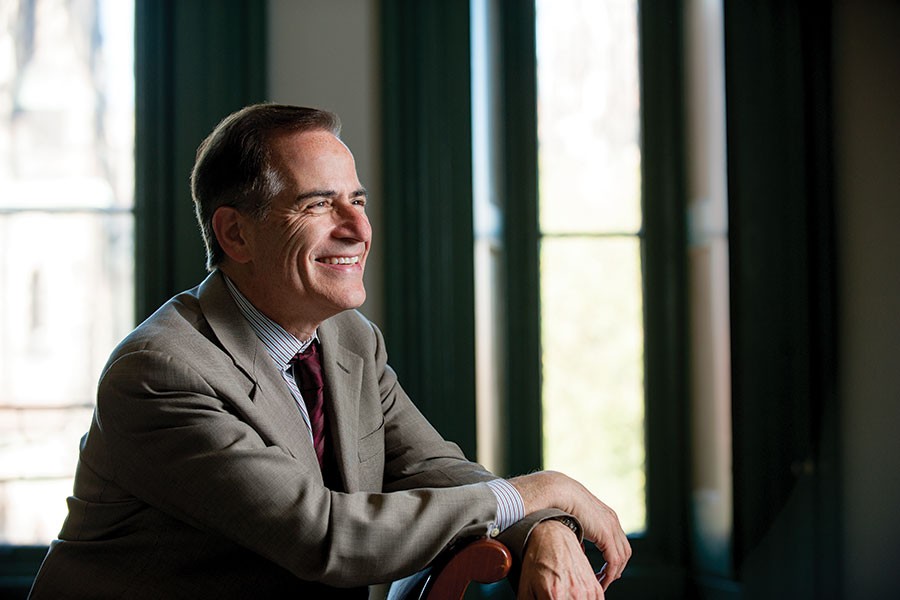 Fred Bronstein is thinking about the future. He has to. In June he became the dean of the Peabody Institute, responsible for leading the oldest music conservatory in the United States into the 21st century. And he's doing that during a time when the landscape of arts and culture in the country is changing, radically, especially in the Western tradition called classical music. Orchestral music has the patina of being seen as the rarified high art of the privileged, a notion perhaps inadvertently created by the American orchestra business model over the past 100 years. That business model is no longer sustainable, however, and today's and tomorrow's musicians, composers, conductors, and artists are faced with correcting that inaccurate impression. Performers need to be able to showcase the music's sublime possibilities, of course, but they also have to be audience developers, educators, and entrepreneurs. 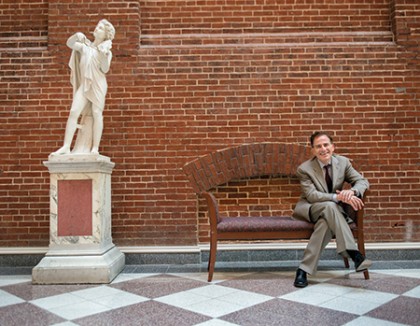 "What I still tell people is you still have to be the best player you can be, but it's no longer enough," Bronstein says during an October interview, echoing a sentiment he had expressed many times since being named dean in March. "It's a very competitive world out there, and you've got to be able to do other things if you're going to have a better chance of being able to navigate that increasingly complex professional world."

The 58-year-old Bronstein comes to Peabody after nearly two decades of working in that complex world of the American orchestra. As the former president and CEO of the Omaha, Dallas, and, most recently, St. Louis symphonies, Bronstein navigated two of the more turbulent decades in American orchestra history. Orchestras in the United States, at their inception, were modeled on their European counterparts, and over the 20th century those American classical music institutions tried to distinguish what made them "American."

One argument of how they did that is by embracing market forces: Whatever filled the house worked. And what did that most consistently were stars, be they conductors such as Arturo Toscanini or soloists such as pianist Vladimir Horowitz. In this scenario—which is much more richly developed by journalist, educator, and Post-Classical Ensemble executive director Joseph Horowitz in Classical Music in America—the audience, repertoire, and relevance of the American orchestra constricted as they anchored themselves to audiences that could afford to pay to see stars perform the great works of the 18th- and 19th-century European canon.

Living composers, new audiences, engagement with the cities they called home—these weren't concerns in this model, and the perceived cultural and economic distances orchestras put between themselves and their communities incubated the crisis in classical music discussions that have percolated through the industry for at least the past 30 years. Subscriptions are down, classical radio stations are disappearing, sales of classical music recordings remain minute, orchestras have increasingly contentious relationships with their performers unions; all contribute to the business challenges facing orchestras. In 1993 the American Symphony Orchestra League issued a report titled "Americanizing the American Orchestra," which laid out a number of the concerns that orchestras have faced ever since.

In conversation, Bronstein frequently turns to the orchestra as an analogy for the conservatory—in terms of their missions, the challenges they face, and the ways they need to evolve. "One of the discussions that developed over many, many years is how are orchestras uniquely American? How are they unique to their communities?" he says. "Finding ways to answer that is a really important part of what an orchestra needs to do today. And when you look at the orchestras that are not just surviving but thriving, they see their core business as putting on classical concerts, but they have surrounded that with different types of music that they present, and with community and educational activities.

"You have to have that kind of breadth in terms of what you do," he continues. "And I'm saying we need to think of ourselves and our model similarly."

Pursuant to that, Bronstein identified in his September convocation address four areas needed to reinvigorate Peabody for the 21st century. The first he named is, as it should be, Peabody's quality level. It's a conservatory first and foremost and should strive for the same level of excellence as every other school in the Johns Hopkins universe.

The other three pillars, as he calls these areas, are the interdisciplinary space where music intersects with other subject areas, innovation in Peabody's curriculum and digital reach, and the institute's connection to the community. These are all the kind of big-idea subject areas tossed around by arts and higher education institutions as well as by tech startups and corporations. And in conversation Bronstein can discuss them in the managerial business-speak common to administrators, CEOs, and executives.

Bronstein brings a much more compelling perspective and personal experience to these discussions, however. Though he's spent the past 20 years exploring these ideas while at the top of the organizational chart, his approach to them was shaped by his time as a performer. Bronstein studied piano, earning his bachelor's degree from Boston University, his master's from the Manhattan School of Music, and his doctorate from Stony Brook University. In 1984, while he was a DMA candidate, he co-founded a chamber ensemble called Aequalis with percussionist Michael Parola and cellist Elizabeth Mohr. The trio was dedicated to the performance and commissioning of new works by living composers. It toured nationally, held master classes, and in 1992 released a pretty cool CD on New World Records featuring the works of five contemporary composers, including the late, underrated Miriam Gideon.

Bronstein was doing this in the 1980s, when classical music hadn't as enthusiastically embraced the do-it-yourself ethos that younger players have brought to it in the past decade. "What made it unique was at that time, most new-music groups were ad hoc, part-time," Bronstein says. "We were trying to make it a full-time enterprise, and that forced us to think about it in a totally different way.

"That was really the learning experience for me," he continues, adding that the trio quickly discovered the difficulty of selling and marketing new music. "What we learned early on is that it wasn't enough just to play the music. We needed to think about it as a business. How do we find the audience for this? How do we make it accessible? How do we make this relevant? Who is our market? From the very beginning, I had been thinking about music not just as an isolated silo but how it relates to who you are trying to talk to about it, who you are trying to communicate with about it, and how you are trying to convince people it's important.

"This is what it is, right?" he adds with a laugh, pointing out that getting the art that you love out there involves grappling with all those business questions, from the DIY ensemble level all the way up to the orchestra. And he sees today's conservatory as needing to prepare its students to do that—to be advocates for the music, to be educators about the music, to reach out into the community and bring people in who think classical music isn't for them, to create the space for them to experience it. Just as it isn't enough for the musicians to be excellent performers, it isn't enough for conservatories simply to produce great musicians.

"I don't know if any of the major music schools do a really great job of this yet," Bronstein says. "I think everybody's got programs and they're trying to do it, but I don't know that anybody is really doing the kind of job in this that needs to be done." Bronstein believes Peabody can be a leader in that evolution of musical education and its surrounding conversation. In July, he was a guest on NPR's Diane Rehm Show addressing the future of classical music alongside New Yorker critic Alex Ross, concert pianist Orli Shaham, and critic and Juilliard faculty member Greg Sandow. And in October, Peabody held the What's Next for Classical Music symposium with Bronstein; Marin Alsop, music director of the Baltimore Symphony Orchestra; Ben Cameron, director of arts fundraising at the Doris Duke Charitable Trust; Thomas Dolby, Homewood Professor of the Arts at Johns Hopkins; Peabody flute faculty member Marina Piccinini; and Jesse Rosen, president and CEO of the League of American Orchestras. The three-hour event was broadcast online, drawing viewers from 32 states and 31 countries.

The discussion was a mixture of sobering reality and genuine hope, oftentimes touching on why classical music matters. Leonard Bernstein often addressed that very question during the New York Philharmonic's Young People's Concerts. Of course, that was a different cultural era entirely. Bernstein's program appeared on national television from 1961 to 1968 via CBS during prime time and was syndicated to foreign markets.

Today, classical music doesn't occupy the same place in the cultural landscape. All the arts, in fact, have started fading out of public education. "I think there is a genuine issue in the sense that we do live in a country where, unfortunately, music in schools doesn't happen everywhere," Bronstein says. "That means that the cultural institutions have even more of an obligation and a need to fill that vacuum. Peabody is a place that uniquely can do that. So I see us—Peabody and the rest of Johns Hopkins—as having a rare opportunity to make this place even more relevant and competitive in the future because of the unique assets that come together here."

Relevant is a revealing word choice in this instance. It speaks not only to Peabody's place as the arts institution at a research university but also to classical music's perennial campaign to justify its existence in America. What can music say about science? What can an 18th- and 19th-century musical tradition say about being alive today?

"I said jokingly at one of the deans meetings, I think it was my first one, that we're your soul," Bronstein says of Peabody's place in the Johns Hopkins family. "And they laughed, but it's partly true. What we at Peabody bring is unique in that sense."

He adds that he's always noticed how people turn to classical music for really important moments, and mentions Yo-Yo Ma's playing Bach's Cello Suite No. 1 at the site of New York's World Trade Center as part of the 10th anniversary remembrance tribute of Sept. 11. "I will always remember Yo-Yo Ma sitting there at ground zero playing solo cello," Bronstein says. "The music is relevant. It matters. We have just, over time, become separate from it. But when you allow people to realize it's not separate and to listen to it on their own terms, I think people's perspective on it changes."

And that's how he sees his role at Peabody: as a catalyst to help the institution evolve into the visionary nexus so that today's young artists can stir souls tomorrow. "I'm going to push because there is a certain urgency about what we need to do," Bronstein says. "So I think in putting some of these issues on the table and thinking about this a little differently, we are, in a sense, challenging the institution. But this is an institution of creative people who care deeply about it. So I look at us and say, 'There's almost unlimited potential.'" 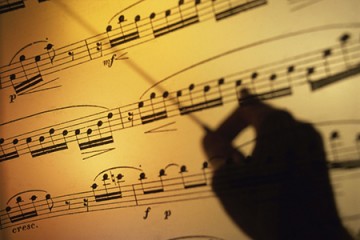