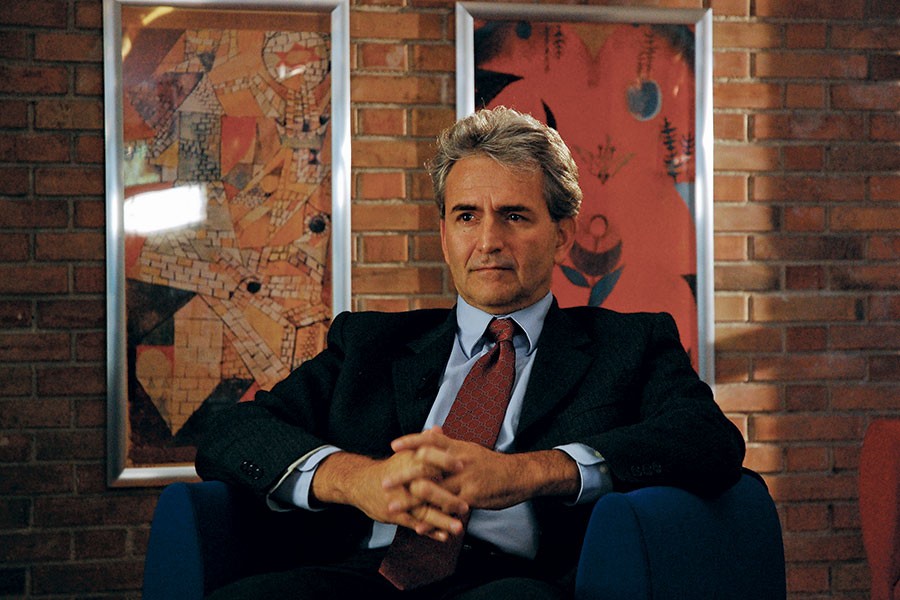 Image caption: Michael Plummer, an international economics expert, is at the helm of SAIS Europe, located in Bologna, Italy.

Ebola. Putin's Ukrainian gambit. ISIS. The never-ending fighting in Gaza. International stories with worldwide implications one and all, and exactly the kind of fodder that makes for rousing discussions inside the walls of SAIS Europe, located in Bologna, Italy.

Long known as the Bologna Center, SAIS Europe marks its 60th anniversary this year with a new name, a new director, and a new mission: to increase its global footprint while cementing the three-continent SAIS franchise as a premier graduate program for future world leaders.

In addition to Bologna and the main SAIS campus in Washington, D.C., the school operates in Nanjing, China, where SAIS China coordinates the Hopkins-Nanjing Center, a collaboration with Nanjing University, and SAIS' D.C.-based China Studies curriculum. But SAIS Europe may be the lynchpin. Strategically located within a two-hour flight of intellectual centers such as London, Athens, Amsterdam, Berlin, Vienna, and Rome, the city of Bologna offers students, scholars, and faculty connectivity without the cacophony associated with physically being in a major metropolis.

"This is a matter of being at the heart of Europe. If you're going to have a European perspective [of world events], Bologna is a very good place," says SAIS Dean Vali Nasr. "It is a city with intellectual traditions, including the oldest university in Europe [Università di Bologna, founded in 1088]. It is a student city, not a touristy city, not a city focused on financiers or government actors or EU bureaucrats. It allows students to focus on their academic work while being within striking distance of all those cities—Brussels, Berlin, Geneva—wherever you have international and key governmental organizations."

Nasr, based in Washington, led the rebranding effort last year, the first step in establishing that global footprint and expanding SAIS Europe's global student appeal. Currently, students from more than three dozen countries attend the school. "[The name] Bologna Center did not fully reflect that this was a European center of intellectual excellence," Nasr says. "It's a branch of SAIS that approaches global issues from a European perspective—not just an Italian one, as some people may have thought—in complement with the American/global perspective we do in SAIS Washington. That's what makes this combined program so unique. And I think 'SAIS Europe' resonates better with audiences we are trying to attract in Asia, Latin America, and the Middle East.'"

Nasr picked international economics expert, and SAIS graduate, Michael Plummer as SAIS Europe director, a job he assumed in August. Plummer, who was formerly head of the development division of the Organisation for Economic Cooperation and Development and editor-in-chief of the Journal of Asian Economics, sees outreach as being key to building the SAIS Europe brand.

That outreach takes several forms. One is faculty presenting their work at conferences far and wide. Plummer recently gave several lectures at conferences in the U.S. "For example, I gave a talk at a conference in Berkeley, and there were 30 professors in the audience who may not have known much about SAIS Europe. Now they do. And they all have students. It raises our profile," Plummer says.

SAIS Europe's publications, notably those trumpeted by its research think tank, the Bologna Institute for Policy Research, are another way of becoming part of global discussions on setting international policy. "We've had some very important hits [from our research]. For example, we have a grant to study what's called 'optimal financial areas,' led by Erik Jones. That work has been presented before Central Bank governors in Europe," says Plummer, whose own research has been presented in Australia before the chief negotiators of the Trans-Pacific Partnership, an ambitious 12-country free-trade agreement that includes the United States and Canada.

With graduates now working at important policymaking bodies including the World Bank, the United Nations Relief and Works Agency (Amman, Jordan), the Colombian Ministry of National Defense (Bogotá), and the Peres Center for Peace (Tel Aviv, Israel), SAIS Europe continues to build its reputation as an impact institution, a step that Plummer says is vital for attracting European students. Unlike the case in the U.S., where top international studies schools such as Georgetown and Harvard cost roughly the same as SAIS, in Europe that's not so.

"We're competing here in Europe with heavily state-subsidized MA programs in international affairs taught in English," says Plummer, who adds that these state-funded programs are often less than half the cost of a SAIS two-year degree. "So we're competing in a pretty heavy market. So we have to do a lot to underscore that we are exceptional, something different. If you come to us, you're getting the Ferrari, not the VW Golf." That's the kind of intellectual horsepower needed to attack global problems in the modern world.