Peter Kalugin, a JHU senior, is named a Rhodes Scholar

The senior is one of just 32 men and women who received the good news on Nov. 22 that they had won one of the most famous academic awards available to American college students. 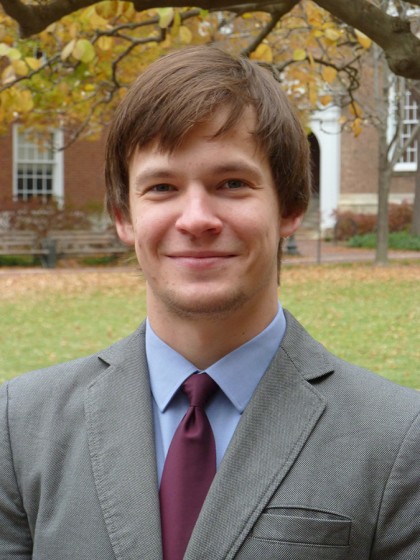 Kalugin will graduate in May with a degree from the Krieger School of Arts and Sciences in molecular and cellular biology and mathematics, with a minor in physics.

Rhodes Scholarships provide all expenses for two or three years of study at the University of Oxford in England, and may allow funding in some instances for four years. Kalugin, chosen from among 877 applicants endorsed by 305 different colleges and universities, will enter Oxford in fall 2015 to pursue an MSc in oncology, a two-year degree that will allow him to take courses while conducting research.

"The news is still sinking in, but I'm very excited about the opportunity," Kalugin wrote in an email the next morning from his home while spending time with his family in Albuquerque, New Mexico. "I've spent a year at Oxford previously and it was one of the best experiences that I have ever had, so going back is a real privilege."

Passionate about pediatric oncology and research in cancer cell growth, Kalugin said he is especially interested in becoming involved with the newly built Cancer Research UK medical center in Oxford. It's a research institute funded by and fully integrated into the Cancer Research UK charity, an independent organization that sponsors and directs not only cancer research but also public outreach and policy.

"This basically means that apart from cancer research, I'll also be able to interact with leaders in cancer policy and communication, and build expertise and connections in the realm of cancer treatment delivery," Kalugin said. "I will then return to the U.S. to do an MD/PhD focusing on cancer research and care. I hope that my experience at Oxford will allow me to pursue a career that combines cutting-edge research with a strong involvement in cancer care delivery worldwide."

Kalugin is one of JHU's Woodrow Wilson Fellows, undergrads who, beginning in their freshman or sophomore year, work closely with highly respected faculty mentors on independent research projects while receiving up to $10,000 over four years (up to $7,500 for sophomores) to be spent on research-related costs such as travel, equipment, and use of archives or laboratories.

As a sophomore, Kalugin received a Goldwater Scholarship, a merit-based award for one or two years covering tuition, fees, books, and room and board up to a maximum of $7,500 per year. During the 2012–13 academic year, he studied at Oxford's St. Anne's College through the Hopkins St. Anne's, Oxford, Pre-Med Programs, which allow sophomores and juniors planning a career in medicine to spend a year abroad.

Upon returning to Hopkins, he began conducting research in the lab of Takanari Inoue, an assistant professor in the Department of Cell Biology at the School of Medicine. Most recently, he has been working on a project to illuminate the mechanism of how cancer cells become resistant to a certain anti-cancer drug. Inoue called his student "absolutely stellar, with superb intelligence, innovativeness, and enthusiasm."

"He is destined to become a leader in medical science," Inoue says.

Kalugin was elected to Phi Beta Kappa as a junior. He plays the saxophone, speaks five languages, has taught English to immigrant students, and has volunteered at orphanages in Mongolia and Nepal.

Faculty members who know Kalugin from their courses describe him as a student who is "off the charts" in terms of his academic achievements.

"Overall, his scientific reasoning, his quantitative and writing skills, and the depth of his understanding of physics place him among or above our best physics alumni pursuing physics PhDs in the top graduate programs in the country," says Nadia Zakamska, an assistant professor in the Department of Physics and Astronomy. "I was therefore astonished to learn that physics is only a small facet of his spectacular CV: Not only does he have a stellar academic record in several different subjects, but he is pursuing a solid research program in cell biology and a variety of extracurricular activities."

"It's not that Peter does a lot of stuff, it's that he takes on multiple, serious challenges, meets them all with high-level performance, and succeeds brilliantly," says Joel Schild­bach, a professor in the Department of Biology. "I met Peter at 9 a.m. on his first day of college and have either been instructor of one of his courses or his faculty adviser ever since. I'm used to working with exceptional students. Peter manages to stand apart. He has two intense majors, a minor, served as editor-in-chief of the Journal of Young Investigators, and pursued an excellent research project."

Before Kalugin, JHU's most recent Rhodes Scholar was Eleanor Gardner, who was named a Bermuda Rhodes Scholar for the 2013–14 academic year. Undergraduates Wen Shi and Wes Moore were selected as Rhodes Scholars in 2003 and 2000, respectively.

Students interested in applying for the Rhodes or other competitive awards should contact the university's National Fellowships Program.