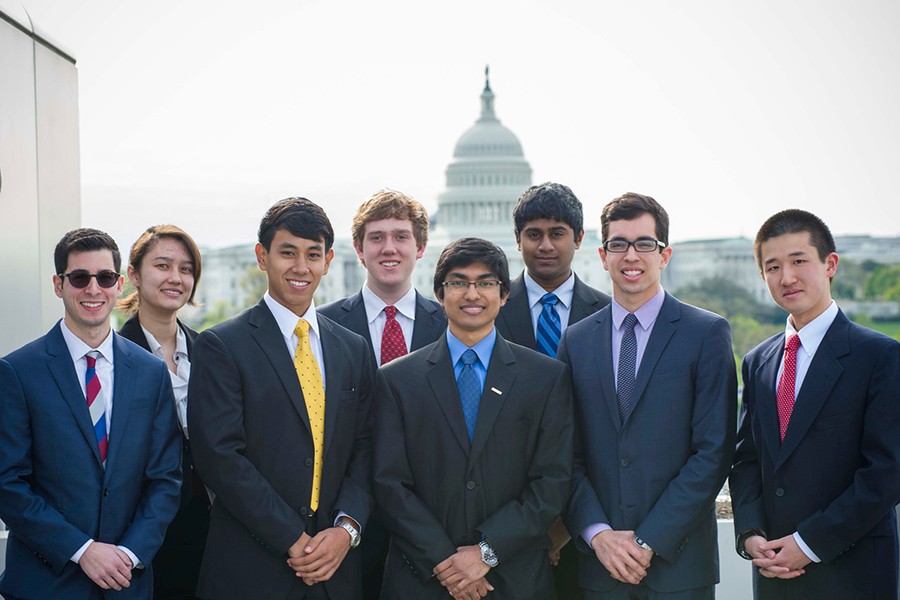 A Johns Hopkins biomedical engineering student team has placed second in the undergraduate division of the Collegiate Inventors Competition for its AccuSpine probe, marking the third consecutive year that a Johns Hopkins team has been awarded a top prize in this challenge.

The winners were announced in November during an awards ceremony at the U.S. Patent and Trademark Office in Alexandria, Virginia, after finalists presented their prototypes in a daylong exposition held by contest organizers Invent Now and the National Inventors Hall of Fame.

AccuSpine, developed under physicians Chetan Bettegowda and Sheng-fu "Larry" Lo of the university's School of Medicine, is a device that makes placement of screws during spinal fusion more accurate. The prototype, which already has been tested on cadavers, has garnered nearly $85,000 in prize money at innovation challenges this year. This latest award, coveted among undergraduate and graduate inventors, includes a $10,000 prize.

"We are very fortunate to have had the opportunity to participate in this distinguished competition," says team leader Anvesh Annadanam, a senior studying biomedical engineering. "We are very thankful for the support of our Biomedical Engineering Department," he says. "Our team will continue to work hard on the development of our device."

Each year, 500,000 spinal fusion surgeries are performed in the United States. These operations involve fusing vertebrae in the spine with metal screws and rods. However, the students say, screws are misplaced in roughly 20 percent of surgeries, leading to postoperative neurological or vascular complications.

"There's a hard bone layer that surrounds the vertebra," Annadanam says. "Our device tells surgeons when to stop so they don't breach that bone."

AccuSpine aims to enable safe and accurate pedicle screw placement by providing real-time feedback to the surgeon. It uses vibrations and flashing LED lights to warn when an imminent breach is detected. The advantages: It offers peace of mind in the operative outcome, a higher standard of care, and reduced intra-operative radiation exposure, Annadanam says.

The tool was designed by Annadanam, Clay Andrews, Ravi Gaddipati, Luis Herrera, Bradley Isaacs, Adarsha Malla, Erica Schwarz, and Eric Xie. The project began in July 2013 as part of a Department of Biomedical Engineering program within the Center for Bioengineering Innovation and Design.

The inventors have filed a provisional patent application on the device and intend to incorporate as a company. They plan to market the probe or license the technology to an existing company.

The student inventors competition, in its 24th year, is sponsored by the Patent and Trademark Office and AbbVie Foundation. The Johns Hopkins team placed second among this year's seven finalists. In addition to the team award, a $2,000 award will go to the students' faculty adviser, Robert Allen, an associate research professor in Biomedical Engineering, a department shared by the schools of Engineering and Medicine.